A tale of an Indonesian volcano, a monk, and the mass graves of London. 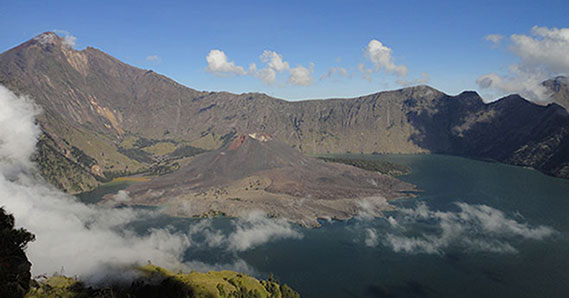 (ISNS) -- The Benedictine monk Matthew Paris knew that 1258 was a really bad year. Winter seemed to last forever. The sky was always dark. There were no crops, he wrote, and hundreds of thousands of people were starving to death. It was the year summer never came.

Scientists, working from bores of glacial ice in Antarctic and Greenland, know that the cause of the atmospheric upset was a large volcanic eruption somewhere, something the good monk could not know.

The mystery was: what volcano, where?

An international team of researchers now thinks they have the answer: Samalas volcano on the Indonesian island of Lombok. It was one of the greatest explosions in the past 7,000 years, far greater than the immense 1883 eruption of Krakatoa, said Frank Lavigne, of the University of Paris - Sorbonne. The paper, co-authored by scientists from France, Switzerland, the United Kingdom and Indonesia, was published online in the Proceedings of the National Academy of Sciences.

The explosion lofted gigantic quantities of sulfate and ash into the atmosphere, which plunged the earth into a volcanic winter.

That something calamitous happened that year is clear in the chronicles. Friar Paris, living at the St. Albans Abbey in Hertfordshire, England, kept a journal, Historia Anglorum, describing “unendurable cold” that “bounded up the face of the earth, sorely afflicting the poor, suspending all cultivation, and killed the young of the cattle.” By June he reported nothing was growing and by fall there was nothing resembling a harvest. People began to die by the thousands, starting with the poor.

“...Dead bodies were found in all directions, swollen and livid, lying by fives and sixes,” he wrote. “When several corpses were found, large and spacious holes were dug in the cemeteries and a great many bodies were laid in them together.”

One of those “holes” apparently was Spitalfields cemetery in London, the largest gravesite ever recovered in modern times.

Archaeologists first thought that the bodies were victims of the plague, but later radiocarbon dating showed the bodies were interred in the middle of the 13th century, before the plague and right around the time of the eruption.

Some 18,000 people were buried at Spitalfields. While some were placed in orderly graves, many were jumbled together, indicating that the death rate vastly exceeded gravediggers' ability to bury them properly.

But while the fact of the eruption had been linked to an historic event, no one knew which volcano was responsible.

“People knew the eruption was quite big, but until now no one had succeeded in finding it,” Lavigne said.

There were clues. The research started out with ice cores collected 30 years ago, which showed the ash from the eruption. The fact that ash was found both in Antarctica and near the Arctic indicated the explosion occurred in the tropics, Lavigne said.

They were looking for clues such as a caldera, the volcanic crater left by the eruption, and pumice, volcanic rock that pours or is blasted out of a volcano.

Indonesia has 130 volcanoes, few of them studied very well, Lavigne said, so it was tempting to place the blast there. So the scientists headed into the field and they found Samalas, matching exactly what they were looking for through geochemical testing.

Judging by the amount of sulfur found in the area, the explosion shot eight times as much sulfur dioxide into the air as the 1883 explosion of Krakatoa, which colored sunsets for years around the world, and 10 cubic miles of rock.

The column of dust and smoke probably reached 27 miles into the air; lava was found 15 miles away. The eruption was probably between May and October of the year before Friar Paris’ Annus horribilis.

The effects of volcanic eruptions on the climate are well documented, said volcanologist John Eichelberger, now dean of the graduate school at the University of Alaska Fairbanks but once head of the U.S. Geological Survey’s Alaska volcano research team.

Volcanoes put ash into the air, but “the big culprit is sulfur dioxide, which forms sulfuric acid droplets that are not reflective and don’t let as much solar radiation to the surface,” he said. “It doesn’t take much to disrupt the season and create a disaster.”

A drop of one or two degrees Celsius will shorten the length of a growing season, Eichelberger explained.

The volcano still is active, but Lavigne said that since the Samalas volcano erupted relatively recently -- geologically speaking -- it is unlikely to unleash another eruption as big any time soon.

Eichelberger was not so sure. If the 1258 eruption consisted of only a small part of the magma flowing beneath Samalas, the rest of it could go again at any time, so he is not sure it is safe.

Why Training with Heavier or Lighter Baseballs Could Help Pitchers Throw Faster
Fossil Bite Marks Show Some Dinosaurs Ate Their Own
Royal Jelly Does Not A Queen Make
What Does the Spiny Lobster Sound Like? Loud.
Tyrannosaurs' Long Legs May Have Been for Marathons, Not Sprints
END_OF_DOCUMENT_TOKEN_TO_BE_REPLACED