The glue cements the moth’s wing scales together like a wall of bricks.
Image 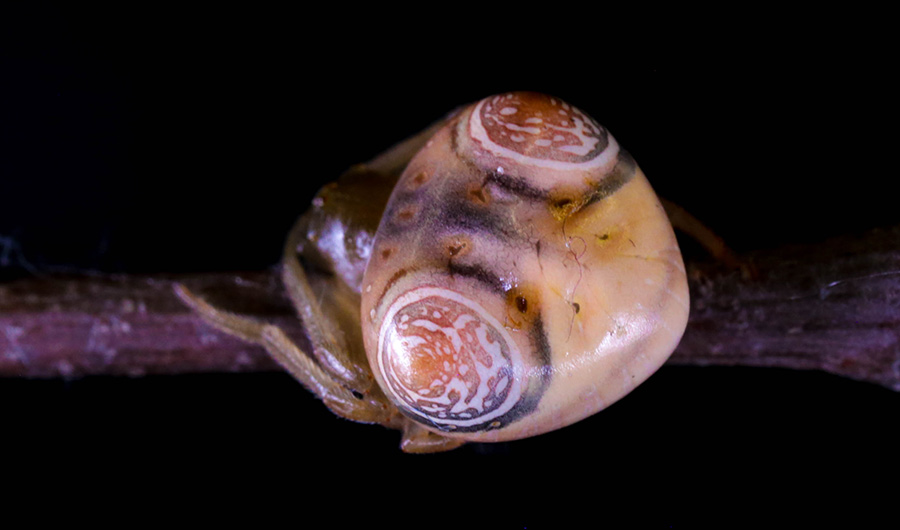 Cytarachne akirai spiders like this one produce a specialized glue that sticks to moth wings, even though the wings are covered in scales that slough off when touched.

(Inside Science) -- If you've ever tried to stick tape to a dusty surface, you know the dilemma most spiders face when trying to catch moths. Moth wings are covered in tiny scales that slough off at a touch, allowing moths to escape dangers such as spider webs. But some spiders have evolved a special glue that instantly soaks under the scales and down to the base of the wing, locking everything together into a solid mass.

"You have this normal defense of the moth that's all of a sudden being utilized against it," said Candido Diaz, an evolutionary biologist at Vassar College in Poughkeepsie, New York, who conducted the study with his colleagues while at the University of Akron in Ohio. "Without the scales to increase the surface area, to cause the glue to spread further, the glue would actually be very weak and useless."

The study, which was published today in the Journal of the Royal Society Interface, focused on a species of orb web spider called Cyrtarachne akirai that lives in rice paddies in Japan. While most orb web spiders orient their webs vertically, C. akirai builds horizontal webs to catch moths fluttering up from below, said Diaz. Threads of silk dangle down from this web, each one drenched in glue. The glue forms globules like beads on a string, just big enough to be seen with the naked eye.

Most spider glues absorb moisture from the air, so they can remain wet for months or years, and they don't dry out even when entangling an insect. When Diaz started studying C. akirai spiders, he expected their glue to work the same way.

"I had so many samples that I was holding on to, to be like, when I'm less busy, later in the semester, I'm going to study these. And then they were all dry and useless," said Diaz. "I was like, nothing in the literature explains this."

C. akirai spiders only spin webs at night, and their glue dries out in a matter of hours if it isn't used, so Diaz had to become nocturnal to conduct his experiments. Even collecting the threads was tough, because the glue only works in humid conditions, and the spiders would eat their webs if they felt the humidity in their enclosures drop.

Eventually, Diaz and his colleagues managed to study enough of the dangling threads to see what was going on. In one set of experiments, they took high-speed videos of glue droplets touching moth wings, and compared them to videos of glue from a more typical spider called Larinioides cornutus.

The "typical" glue from L. cornutus was thick and gooey, and it only spread out a little bit on the wing surface. But the C. akirai glue had a runny texture that let it spread much farther. Moth wing scales are covered in a complex network of ridges and grooves, and the C. akirai glue ran along these grooves, apparently pulled by capillary forces -- the same forces that draw water into a paper towel.

This high-speed magnified video shows C. akirai glue soaking into a moth's wing, its movements guided by the network of grooves on the scale surfaces. Credit: Candido Diaz

"It starts to ride those lines along the scales, and so it doesn't just radiate straight out," said Diaz. "It goes left and right, back and forth, kind of filling up the entire channel and all the spaces."

Normally, one would expect that a glue runny enough to flow under moth scales would just fall apart. Indeed, when the "typical" L. cornutus glue is made thin and runny through exposure to high humidity, it becomes too weak to maintain a bond. But the C. akirai glue somehow sets as it spreads.

In a previous study, Diaz's team was able to visualize the internal structure of spreading C. akirai glue droplets, and they saw what looked like protein filaments condensing while a layer of water formed around the edge. In the new study, a chemical analysis technique called infrared spectroscopy revealed that water evaporates quickly from the spreading glue. Diaz believes that capillary forces help suck the water away from the solid components of the glue, while the increased surface area allows for rapid evaporation. The water loss triggers specialized proteins in the glue to collapse and bind together.

It took about 30 times more energy to pull a C. akirai thread off a moth wing than it did to pull a more typical L. cornutus thread free. This difference was partly because C. akirai spiders apply a lot more glue, but also because of the glue's unique spreading and drying behavior.

The moth scales strengthened the bond, allowing C. akirai glue to grip with more than twice as much force on intact moth wings than on wings with the scales removed. When the threads did finally pull free, they tore loose large sections of scales cemented together like a wall of bricks. The L. cornutus threads, in contrast, gripped better on bare wings. On intact wings, they came away easily with only one or a few scales stuck to them.

One of the strengths of the study was that it brought together scientists from different disciplines -- some with expertise in materials sciences, and others who specialized in spider biology, noted Brent Opell, an evolutionary biologist at Virginia Tech in Blacksburg, who has worked with the researchers in the past but was not involved in the project.

Sarah Stellwagen, a biomaterials scientist at the University of Maryland, Baltimore County who was not involved in the study, also had words of praise.

"I think it was a great little study," she said. "They did a really good job actually demonstrating the spreading effect."

There are several related species of spider that specialize in hunting moths, and Diaz thinks they might all use similar glues, although this has not yet been tested. For example, bolas spiders don't build webs; instead, they deposit a big glob of glue on the end of a single thread that they swing at prey.

Someday humans might be able to use such glues as well, taking inspiration from the spiders to develop new synthetic adhesives, said Diaz. Of course, C. akirai's glue has evolved for one specific purpose, and synthetic versions may not be effective for a wide range of uses, cautioned Stellwagen. But the spiders' innovations could offer valuable clues for how to stick things to dirty objects.