Spiders Can Use Webs to Catapult Themselves at Prey

The webs store energy like a bow and can accelerate the spiders at up to 80 Gs.
Image 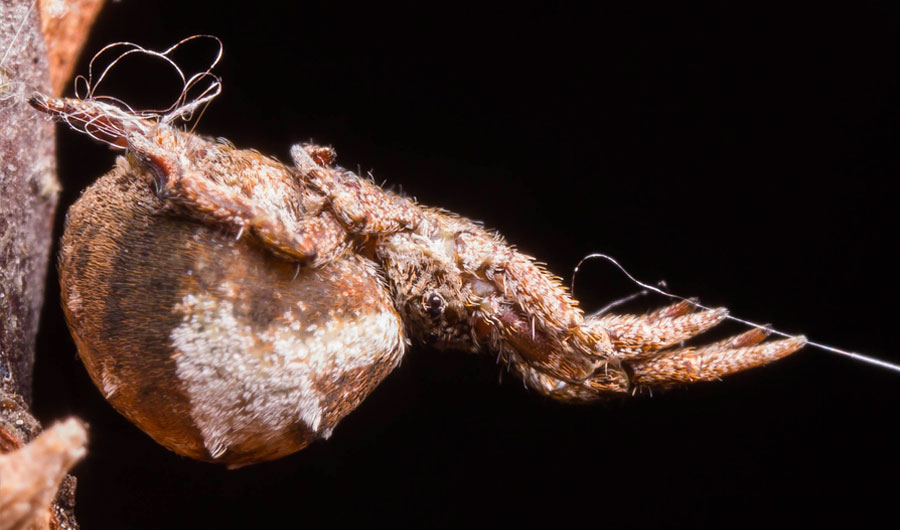 The Hyptiotes spider holding its web in tension.

(Inside Science) -- Spiders can use webs like bows to catapult themselves at prey, a new study finds. This may be the first documented example of tools used in such a way by an animal other than humans, the researchers say.

A number of creatures accomplish explosive feats that exceed the limits of muscle power and speed by gradually storing energy in anatomical structures and then rapidly releasing it, a strategy researchers call power amplification. For example, mantis shrimp can punch their fistlike clubs with the force of .22 caliber bullets using curved structures on their arms that can bend to store tension like a bow, and fleas accumulate energy in springlike tissues to jump up to roughly 200 times their body length, equivalent to a 2-meter-tall person leaping 400 meters.

Humans also rely on this strategy, using tools such as springs, bows, catapults and slingshots. "With a bow, you can use muscles to store energy in the wood of the bow and shoot an arrow much farther than you can throw a spear," said study lead author Sarah Han, an entomologist at the University of Akron in Ohio.

Now scientists find the triangle-weaver spider Hyptiotes cavatus can store energy in the silk threads of its web to fling itself at prey, the first instance known of animals using a device they made for power amplification. "I've always enjoyed the elegance and function of spider webs, and now we have learned another way in which they use these amazing structures," Han said.

The spider is about 5 millimeters long, dwells in woods across North America, lacks venom glands, and does not use adhesive glue in its web, instead creating puffs of feathery silk to entangle prey. It waits in a corner of its triangular web, pulling on a thread to hold the web taut for hours. When prey touches the web, the spider releases this line, and both it and the web are rapidly hurled forward, with silk threads flying around the victim from all directions to further trap it.

Using high-speed video, the scientists found tension in the web could drive the spiders at accelerations of roughly 80 Gs, or 80 times the pull of Earth's gravity. They calculated the 7-milligram spiders would have needed at least 145 milligrams of muscle to generate as much power as the webs did.

More stories about spiders from Inside Science:

BRIEF: Are We There Yet? Wolf Spiders Use Their Eyes as Odometers

"There've been a growing series of advances over the past 10-20 years showing how animals can manipulate their energy to carry out incredibly fast motions, and it's just awesome how we now see these spiders can use their webs to throw themselves around," said biomechanics researcher Gregory Sutton at the University of Lincoln in England, who did not take part in this work. "It would be very interesting to see how the properties of the silk from these spiders compares with that of other spiders that do not carry out this same storage and release of energy."

In the future, the scientists would like to learn more about how Hyptiotes can hold its web taut for so long and how it withstands the forces of catapulting and collision. Furthermore, another research team previously found the ray spider Theridiosoma may also use their circular webs like slingshots. Han and her colleagues hope to collaborate with that group to investigate ray spiders.

"There may be more animals who are capable of power amplification than we know of, and they may be doing it in interesting and novel ways," Han said.

The scientists detailed their findings online May 13 in the journal Proceedings of the National Academy of Sciences.