Scientists now know much more about the underground cavities in the sand that nearly killed a boy in 2013. 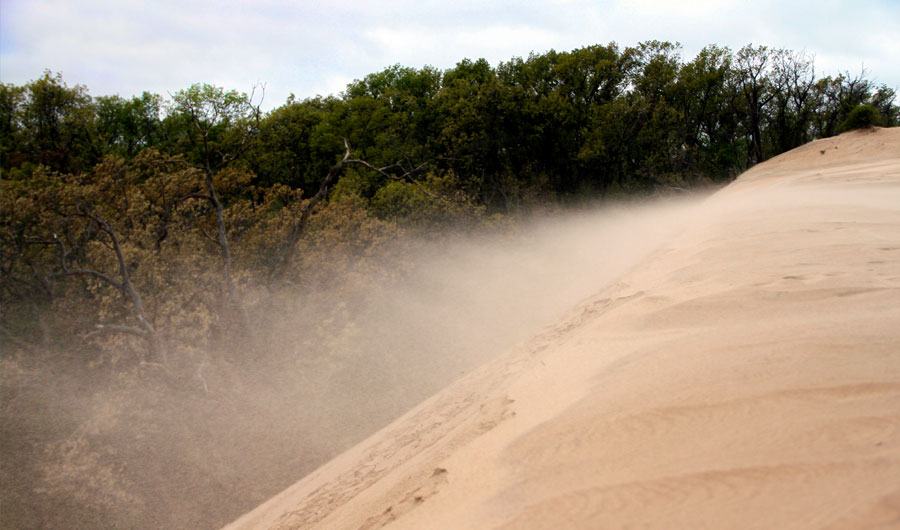 (Inside Science) -- On the shores of Lake Michigan, near the northeastern tip of Indiana Dunes National Park, an approximately 125-foot-high dune rises into the air. Named Mount Baldy, the crescent-shaped mound is arguably the most famous sand dune in the park. Rangers lead visitors on summer hikes to the top.

"You get some gorgeous views," said Kelly Caddell, a park ranger who leads some of the group hikes. Mount Baldy is part of a 15,000-acre site, which received National Park status in February 2019.

But the dune also has strange and potentially dangerous geological oddities lurking beneath its surface. Regulations now prohibit people from summiting Mount Baldy without a guide, after a near-tragedy in 2013 when a 6-year-old boy fell into a hole in the sand. He was buried more than 10 feet underground for hours before being rescued.

At first, scientists were befuddled by the cavity that had swallowed the boy. Shortly after the accident, they started their quest to learn more and keep visitors safe.

While most dunes in the park are covered with vegetation, Mount Baldy is bald. As winds push the loose sand, the dune moves, traveling several feet a year in recent decades. This roving nature eventually explained the mysterious holes.

By looking at aerial photographs, scientists confirmed that since the mid-1900s Mount Baldy had migrated over another tree-covered dune. The buried oak trees then died, and fungus, which researchers found on tree remains they excavated from the dune, rotted the trees from within. Reactions between the fungus and the sand likely created a cement-like cast around the trees that stabilized the cavities that formed. The continued movement of the dune exposed some of these holes at the surface of Mount Baldy. 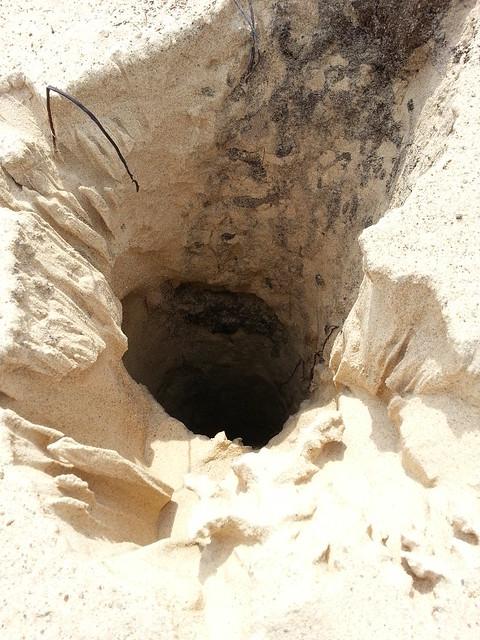 A hole found on Mount Baldy in the summer of 2013.

During their research, scientists and park personnel found several additional exposed holes and many more underground irregularities in ground-penetrating radar scans. Most of the holes were small, but one was more than 7 feet deep. They think this large hole and the one that the boy fell into were once buried tree trunks.

Michigan and Oregon also have migrating dunes similar to Mount Baldy. In fact, in Ken Kesey's 1964 novel Sometimes a Great Notion, a young boy in Oregon falls into a hole in a dune, known in the novel as a "devil's stovepipe."

The researchers who investigated the Mount Baldy holes say their initial findings, published in 2015, could help identify other areas where conditions may be right for similar dune cavities to form.

Meanwhile, they continue to monitor how Mount Baldy moves. Park rangers and volunteers are also working to stabilize the sand by planting grasses and putting in wind breaks.

"Mount Baldy is just fascinating," she said. "It's amazing to see the diversity of people coming here to see this really cool thing. The curiosity has just exploded, which is awesome."

Researchers Study Violinists To Learn How Humans Act in Synchrony
Alligators May Be Able to Survive Venomous Snake Bites
New Theory Says We’ve Been Wrong About How Bubbles Pop
Crustacean Genes May Solve Debate Over How Insects Evolved to Fly
Some Beetles Survive Being Eaten, New Study Finds
END_OF_DOCUMENT_TOKEN_TO_BE_REPLACED

COVID-19 Vaccine, Sharks and Mezcal
Crabs Use Belly Sounds To Communicate
Touring The Trinity Test Site
Protests, A Retracted Paper, and a Super-Earth Planet
Why Is an Empty Shampoo Bottle So Easy To Knock Over?
END_OF_DOCUMENT_TOKEN_TO_BE_REPLACED