Strawberry Poison Frogs Can Take the Heat -- Up to a Point

Some poison frogs have become used to the warmer temperatures caused by climate change and deforestation, but they’re nearing their limit.
Image 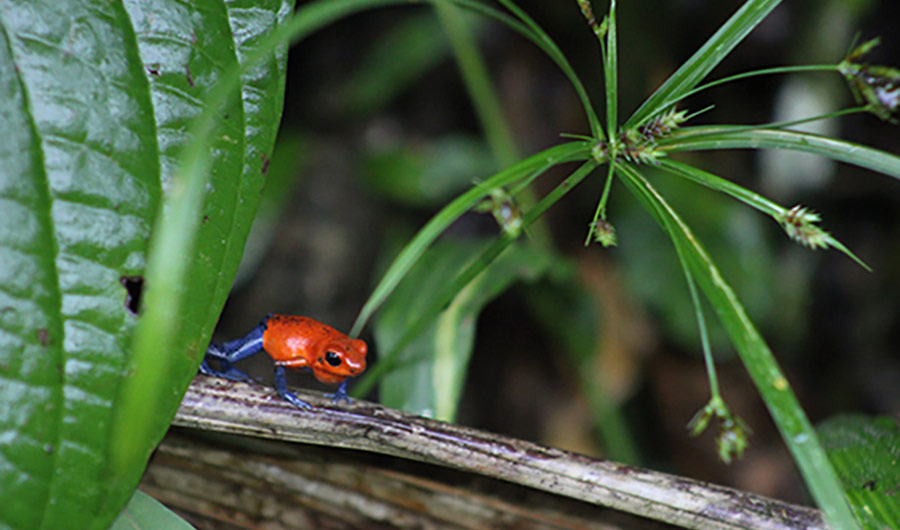 (Inside Science) -- Human body temperature typically hovers close to 98.6 degrees Fahrenheit. But for many amphibians, including poison frogs, their bodies don’t have the ability to maintain a constant temperature. Instead, they depend on their surroundings to regulate their body heat. That makes them more susceptible to climate change and deforestation.

According to new research published today in the journal Biotropica, some poison frogs are adjusting to the loss of their native forest floor habitats by learning to live in warmer, mostly open fields. But they can only stand so much heat.

“They’re kind of bumping up against the ceiling of what they can tolerate,” said co-author Justin Nowakowski, ecologist and conservation biologist at the University of California, Davis.

The researchers studied a frog with a bright red body and blue limbs, nicknamed the “strawberry” or “blue jeans” poison frog (Oophaga pumilio). As humans have cut down the looming trees that once shaded the frogs’ natural habitats throughout Central America, the amphibians must find new ways to cool down.

“They have to find more creative ways of avoiding sunlight exposure,” explained Adrian Manansala, co-author on the paper and a recent graduate from the University of Guam. The strawberry poison frogs often hide under the solitary trees loggers have left behind because the trunks are too thick to cut with a chainsaw.

But even these slightly cooler bits of shade in the pastures are warmer than the forest.

The researchers found that air in the farmland was about 5 degrees Fahrenheit warmer than in the forest, on average, though the difference was sometimes as dramatic as 12 degrees Fahrenheit. Even in shady refuges in the pasture, temperatures were still 3 degrees warmer. The frogs living in the fields also had a higher average body temperature.

“A lot of frog species, we don’t find them in these open habitats,” said Juana Rivera-Ordonez, first author on the paper and a recent graduate from the University of Washington. “But this species is present, and we wanted to know why.”

For Kealoha Freidenburg, an ecologist at Yale University in New Haven, Connecticut, who was not involved in the study, studying different frog species is important because it helps scientists see overall trends in how frogs may be affected by climate change.

To find out if the strawberry poison frogs living in open fields preferred warmer temperatures, the researchers caught 32 poison frogs, half from pastures and half from the forest, and put them into containers made of aluminum foil trays. The researchers lined the bottom of each box with damp sand and placed a heating pad under one side and ice packs under the other.

As the frogs hopped around the enclosure, the researchers took their temperature every 15 minutes for two and a half hours. They noticed that frogs from the open pastures tended to stay on the warmer side, whereas the frogs from the shady forest preferred the cooler side.

Although some of the frogs seemed to like the heat, all of the strawberry poison frogs had a similar maximum temperature that they could withstand. To find this threshold, the researchers placed the frogs in water baths and slowly added warm water. They flipped the frogs onto their backs every minute.

Normally, frogs will quickly flip themselves right-side up. But distressed frogs won’t. Once the water reached 85 degrees Fahrenheit, most of the frogs stopped righting themselves -- indicating that this was the hottest they could tolerate. At the first sign of distress, the researchers moved the frogs back into a room temperature bath.

The results showed the researchers that the strawberry poison frogs in the pastures may be living within a few degrees of their upper limit. But for now, they seem to be doing OK. And the researchers suggest that leaving patches of remnant forest could help the frogs survive as global temperatures rise and forests are converted to agricultural land.

“We hear a lot of doom and gloom about amphibians and species overall with climate change,” said Freidenburg, “but some of these individuals are living in this converted habitat and seem to be doing fine.”