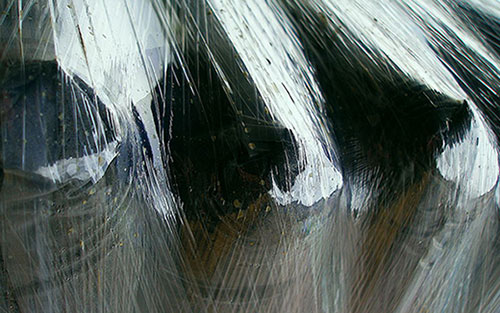 (Inside Science) -- Plastic bags rip when stretched past their limits. Dropping your phone is a good way to break it. But now researchers have developed a plastic that actually strengthens with abuse.

This new material could be used to reinforce at-risk areas of load-bearing objects, such as building supplies or even artificial heart valves. The researchers, from Duke University in Durham, N.C. published their findings in a recent edition of the journal Nature Chemistry.

The backbone of this plastic is a long chain of triangles, with a carbon atom at each point and two bromine atoms on the tip of the triangle. Pulling the material splits one side of the triangle but doesn’t break the chain—it only makes it longer, in the same way untangling a loop in a cord makes the cord longer. The unlooping leaves a linear chain dotted with bromine atoms.

Mixed in with these chains is another molecule. Once the triangle has been split into a linear chain, this additional molecule reacts with the bromine atoms to link separate chains. This forms a network that looks similar to mesh fishing net. Once linked, the plastic loses flexibility and becomes much stronger.

The type of material that reacts when pulled or compressed is called a "mechanophore" because the area responds to mechanical stress, rather than chemicals, light or heat. The bonds are literally ripped apart and that triggers the linking reaction.

Since the inception of mechanophores in the 2000s—very recently in scientific terms—a growing body of literature published by many different research groups has stretched the field  in many different directions. There are a lot of things these materials can do.

“[This] paper is going to have an impact in stirring up even more interest and new directions,” said Andrew Boydston, a chemist at the University of Washington, who also works with mechanophores but wasn’t involved in this research.

Researchers also tested the material when dissolved in a solution. Instead of compressing it, they shook the solution with pulsed ultrasound. After 30 minutes of ultrasound, the material gelled up, coating the sides of the container in a thin film as a result of the chains linking. Pulsed ultrasound is commonly used in the medical field to promote healing in bone fractures, lacerated muscles, and soft tissues such as cartilage. Coupling the new material with therapeutic ultrasound may help to repair such damage.

Whether using the extruder or ultrasound, the bonds that form and strengthen the material are covalent, which means multiple atoms share their electrons. Covalent bonds are very strong, and not easily broken.

“The most important finding is the fact that they’re able to accomplish the force-activated reinforcement through the formation of new covalent bonds,” Boydston said.

The next step in this research, Craig said, is to make a material that hardens in times of stress, but returns to its soft state when the stress is removed. His group is working towards developing a truly reversible system that can hold its large-scale shape while changing its molecular structure.

Jenna Bilbrey is a freelance writer based in Athens, GA.

Protests, A Retracted Paper, and a Super-Earth Planet
Why Is an Empty Shampoo Bottle So Easy To Knock Over?
COVID-19 Vaccine, Monkeys and Bumblebees
Smart Speakers Could Detect Cardiac Arrest
Light And Art Come Together
END_OF_DOCUMENT_TOKEN_TO_BE_REPLACED