A bitter battle can wage over human remains before they rest in peace. 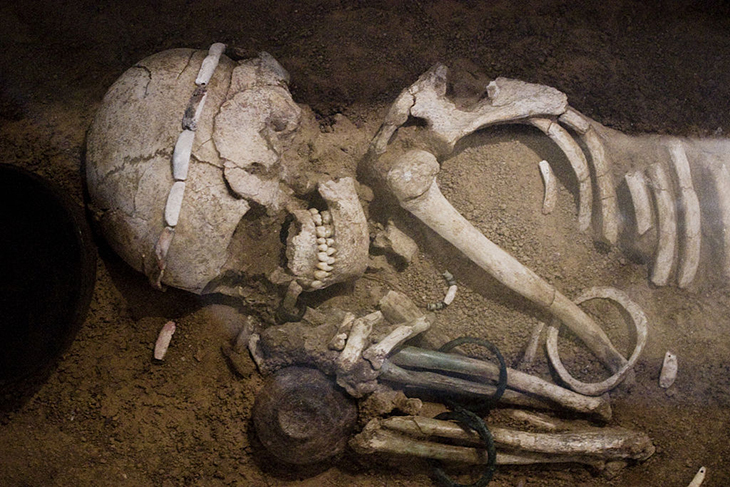 (Inside Science) -- The study of human remains, both historical and pre-historical, is a surprisingly divisive enterprise. It's a practice whose ethics spark fierce debate and strong views about what is morally acceptable among experts and laypeople alike.

It is also an exercise that can reveal priceless information; it can help historians figure out "who done it" in ancient murder mysteries. It can reveal what kind of life that person and their community lived. And, with the help of more recent DNA techniques, it can allow biologists to trace the very origins of human evolution.

But amidst the all this potential, it can be easy to forget that the remains are what's left behind of a person who lived a life and may have living descendants. Cultural attitudes and sensitivities vary around the question of whether human remains -- once discovered -- should be kept and studied, reburied or a combination of the two. This is an especially delicate question when it comes to the remains of American Indians. The historical abuse of burial grounds, which were routinely ransacked for study in the late 19th Century, can be tough to reconcile with the scientific value of groundbreaking discoveries.

A Boon to Research

Ancient skeletons are a precious resource, and like anything else of value, they have become an object of rivaling aims and conflicting wishes. Arguments over some of the most scientifically prized skeletons have been brought to the U.S. Supreme Court with researchers suing for the right to study the bones.

Some archaeologists argue in favor of indefinitely housing and cataloguing almost every human skeleton discovered in an archaeological dig. The science of bone analysis evolves quickly, they contend. You never know what further information may be extracted by future technology.

Others make the case that human bones should be swiftly reburied after limited study, out of respect.

"It's more of a spectrum than a dichotomy," said Alison Galloway, a biological anthropologist at the University of California, Santa Cruz who specializes in the study of human skeletons.

"I fall somewhere between the two. I'm used to looking at remains, taking the information and then returning them," she said.

Some countries have strict laws to arbitrate, while others allow the discretion of anthropologists and archaeologists to play a more influential role.

In many circumstances, Galloway estimated that two years is an acceptable amount of time to keep a skeleton before reburying it -- also known as "repatriation."

"But where there are legal claimants to those remains we shouldn't stand in the way," she added.

The Legal and Moral Quandary

In the U.K. most burials older than 100 years are considered to be archaeological — anything younger is subject to the human tissue act, which makes it illegal to remove, store or use human tissue without consent. That's not to say anything older is automatically fair game. A license from the Ministry of Justice is needed to excavate, but without the complexity of an indigenous minority to consider, things are relatively simple compared to the U.S.

"There are professional guidelines to outline best practices," said Timothy Insoll, a professor of African and Islamic Archaeology at the University of Manchester in England. "To a certain extent it's discretionary, but you have to be very careful about how you store skeletons," he added.

Charlotte Roberts, a professor in the department of archaeology at Durham University in England and president of the British Association for Biological Anthropology and Osteoarchaeology, takes a similar position to Galloway.

Roberts' association has created a code of ethics and standards to advise and guide archaeologists.

The study of human remains has to start from the recognition that it's a privilege and not a right, insisted Roberts.

"Certainly don't name skeletons you're studying," said Roberts, "They have to be treated with dignity and respect."

She advocates keeping skeletons of specific importance in case future technology can yield more findings, but she is not in favor of routinely keeping all specimens.

"Besides, museums are running out of space and it's often an issue of money too," she added.

Other experts have stronger opinions.

"It's almost always scientifically important to keep archaeological remains," said Tim White, director of the Human Evolution Research Center at the University of California, Berkley. White uses skeletal biology and analysis to gather data on the evolutionary past of humans.

"I'm not prepared to say that skeletal remains only have value to particular descendants," said White. Though he did add that he would respect a decision to rebury if the claimants have been properly informed about the skeleton's scientific value and how the bones would be studied. "But very often these conditions aren't met," he complained.

White holds a fierce conviction that all scientifically significant human remains should be studied and that archaeologists have a responsibility to ensure this happens; a principle he has pursued in the courts.

A Legal Battle for Remains

Two skeletons with well-preserved bones -- possibly possessing the oldest genomes on the continent of North America -- were discovered in 1976 on land owned by the University of California. They are between 9,000 and 9,600 years old. Since the university receives public funding, artifacts and bones discovered on its property are subject the Native American Graves Protection and Repatriation Act (NAGPRA), which was enacted in 1990.

It requires the repatriation of the skeletons of Native Hawaiians and American Indians to their lineal decedents and culturally affiliated tribes.

The two skeletons were studied in the period between their discovery and the ratification of NAGPRA, before the university blocked access to them and began proceedings to repatriate them to the Kumeyaay Nation near San Diego. Advances in technology mean that it may now be possible to sequence their entire genome.

White was part of a lawsuit to force the university to allow the bones to be analyzed with modern techniques.

"I know how rare and truly irreplaceable these skeletons are," he said.

During the course of the lawsuit, the remains have been held by the University of California system in an archaeological warehouse in southern California.

The spokesperson for the Kumeyaay Cultural Repatriation Committee, Steve Benegas, has previously said the nation should have the right to decide whether the bones undergo any analysis in the future and that the skeletons should be in their possession. He also added that he has little faith in how the University of California has conducted the studying of the bones in the past. "The university has handled this very poorly over the years," he said in an interview with Wired in 2011, "We have no trust in them. They have treated the remains of our ancestors without respect."

White alleges NAGPRA is not being properly enforced since it states bones should be repatriated to their affiliated tribes. White claims these particular bones have not been definitively proven to be from the Kumeyaay Nation.

"Tribes moved around a lot back then," explained Galloway, "The fact that you found skeletal material in one area doesn't necessarily mean it's from the tribe that currently lives there."

"The university has merely used geography and did not conduct an adequate investigation into affinity," said White.

In other parts of the world, religion makes it difficult if not impossible to study certain burials.

Across the Arab world and in most Islamic countries, researchers are forbidden to unearth Muslim graves.

"There's a prohibition on disturbing the dead. If they're Muslim, you don't touch them. It's as simple as that," explained Insoll, "If you're researching pre-Islamic burials it's different."

Insoll has completed many archaeological digs in the Middle East and Africa, unearthing the remains of humans who died prior to the founding of Islam about 1,400 years ago.

Before putting shovel to dirt, Insoll first has to make sure he's not disturbing skeletons buried in the Islamic faith. A surface scan can show if the bodies were buried facing Mecca, a tradition in Islam, and whether they have any grave goods, like treasure, buried alongside the bodies. Grave goods are a pre-Islamic tradition and not something encouraged in the faith.

Insoll said the veto on excavating Muslim skeletons is perfectly reasonable and he'd never advocate for overturning the ban. But he did admit it creates a considerable gap in the history books.

"It's perfectly understandable and we respect the local traditions," he said, "But it is a lost opportunity. We don't know what diseases were circulating, anything about age expectancy or child mortality."

That's not to say Islamic skeletons haven't been able to tell us anything about the world in which they lived. It is permissible to study bones from Spain's Islamic past.

"It is a completely different context," wrote Sarah Inskip, an assistant professor in human osteoarchaeology at Leiden University in the Netherlands, via email. She has studied Islamic remains on the Iberian peninsular. "The collection I worked on had been excavated with the permission of the local Islamic community," she added.

In some Arab countries there are exceptions to the rule. In Jordan for example, it is legal to study the remains of Muslims if they were disturbed accidentally. This scenario has presented itself to Peter Akkermans, a colleague of Inskip's who specializes in Middle Eastern excavations. "You still need to rebury the remains," he said, "but you're allowed to investigate before doing so." He added that reburial usually takes place within a few months.

Back in California, White has been suing his university for several years, but just lost the final battle when the Supreme Court refused to hear his case in late January. The remains will now go to the claimant, the Kumeyaay Nation.

"It would have taken me and my colleagues a matter of weeks to do the analysis," he sighed. But then not all skeletons are created equal; and for White at least, some are worth fighting for.