Long penises may allow hermit crabs to stay in their shells during sex, reducing the risk of shells being stolen. 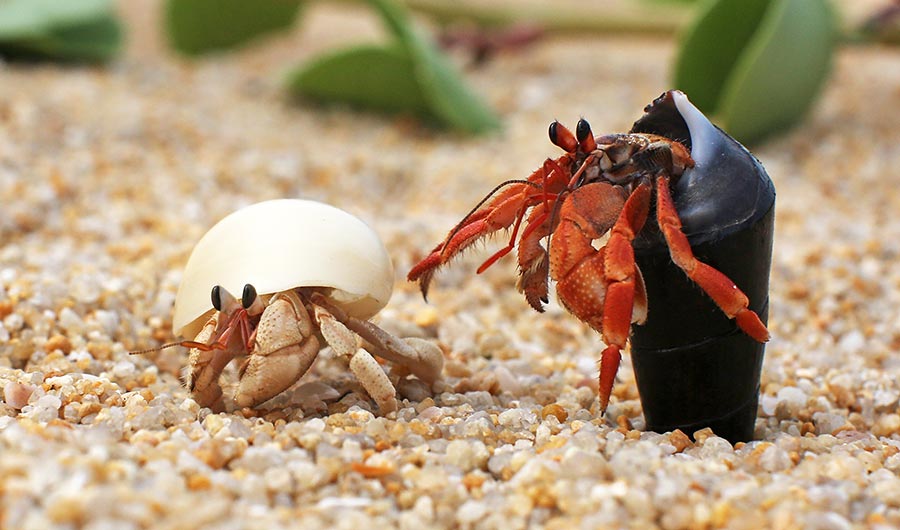 (Inside Science) -- Hermit crabs may have evolved longer penises so they can avoid being robbed during sex, according to new research.

Most hermit crabs live in the discarded shells of other creatures such as snails, moving into a larger shell when they outgrow their old one. But suitable shells are often in short supply. This presents a problem for amorous hermit crabs, since they must come part way out of their shells in order to mate. As a crab emerges, it can create an opportunity for another crab to rush in and steal the shell.

Mark Laidre, a biologist at Dartmouth College in Hanover, New Hampshire, reasoned that longer penises might solve this dilemma for males, allowing them to reach out to a female while keeping the rest of their bodies firmly inside their shells. To test this idea, he measured 328 hermit crabs preserved as museum specimens.

The specimens represented nine species with different approaches to shell use. Three of the species modify the interiors of shells, a laborious undertaking that increases the value of the shell to its owner. Another five species use un-modified shells -- still valuable, but easier to replace. In the final species, shells are only used by juveniles, so mating adults have nothing for other crabs to steal.

As predicted, Laidre found that the longest penises (relative to body size) belonged to the hermit crabs with the most to lose: those that modified their shells. Indeed, the more a species invested in remodeling, the longer its penis tended to be. The five species that used un-modified shells tended to have medium-length penises on average, while the penises of the shell-less species were among the shortest.

The findings, published today in the journal Royal Society Open Science, suggest that hermit crab penises have indeed evolved partly as anti-theft devices. Laidre calls this idea the "private parts for private property" hypothesis -- although it could be argued that if only the penis emerges, it is actually its owner's least private part.

Protests, A Retracted Paper, and a Super-Earth Planet
Why Is an Empty Shampoo Bottle So Easy To Knock Over?
COVID-19 Vaccine, Monkeys and Bumblebees
Smart Speakers Could Detect Cardiac Arrest
Light And Art Come Together
END_OF_DOCUMENT_TOKEN_TO_BE_REPLACED