A high-tech dental analysis of a 2-million-year-old hominid from South Africa indicates it had a unique diet that included trees, bushes and fruits. 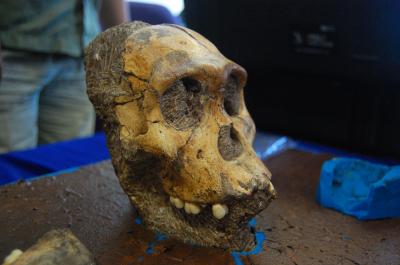 (Inside Science) -- Dental tartar is in the news again. Inside Science News Service covered the diet-divulging dental hanger-on recently, and today a new paper has been published online in Nature, showing that 2 million years ago an ancient human ancestor, Australopithecus sediba, ate bark and other tree matter.

According to a press release, virtually all other previous analysis has shown that our hominid ancestors ate grasses and sedges and not the harder materials identified in this research.

Good stories are available in the New York Times, NBC News, LiveScience, and other outlets.

The specimens came from a cave outside of Johannesburg in South Africa, from two individuals believed to have fallen into a pit in a cave. They are considered very well preserved fossils.

In this research the tartar, which is also called calculus, is part of a multi-pronged analysis that also included examining the wear pattern on the teeth and chemical isotope analysis. All of these things provided evidence about what the two ancient humans had eaten. The numerous co-authors of the paper showed that these two individuals had unique diets compared to what has been found before.

For example, in the calculus were fossilized plant bits called phytoliths, which could be matched to the plants that they came from. Lasers were used to analyze tooth enamel for details about the carbon -- which reveals whether someone ate matter from a tree or from grasses.

I emailed a few questions to Amanda Henry, from the Plant Foods and Hominin Dietary Ecology Research Group at the Max Planck Institute for Evolutionary Anthropology in Germany. She shed some more light on the research and where they'll go from this point:

Inside Science: The release said this was the first evidence of African hominid consumption of bark and tree tissue. What is known about older hominids’ diets?

Amanda Henry: We haven't looked at the phytoliths from other hominins' calculus yet, so we can't yet rule out that they might also have eaten wood and bark. In general, though, what we know from the isotopes suggests that other hominins ate more food from open, grassy environments than A. sediba did.

IS: How degraded is 2 million year old calculus? Is it difficult to work with?

AH: In this case the preservation was exceptionally good, but we think that's in part because overall these fossils were extremely well-preserved. Later this summer I'll be traveling to South Africa to look at other 2Ma hominins, and I'll have a much better idea of what calculus of that age usually looks like.

IS: Are the phytoliths from these samples as well-preserved as younger examples?

AH: Yes, the phytoliths were in very good condition, but that's not very surprising. Phytoliths are made of silica, and are very hardy (they're like little bits of rock!). They can be damaged by high pH (very alkaline environments), but that's about it.

Researchers Study Violinists To Learn How Humans Act in Synchrony
Alligators May Be Able to Survive Venomous Snake Bites
New Theory Says We’ve Been Wrong About How Bubbles Pop
Crustacean Genes May Solve Debate Over How Insects Evolved to Fly
Some Beetles Survive Being Eaten, New Study Finds
END_OF_DOCUMENT_TOKEN_TO_BE_REPLACED

COVID-19 Vaccine, Sharks and Mezcal
Crabs Use Belly Sounds To Communicate
Touring The Trinity Test Site
Protests, A Retracted Paper, and a Super-Earth Planet
Why Is an Empty Shampoo Bottle So Easy To Knock Over?
END_OF_DOCUMENT_TOKEN_TO_BE_REPLACED