Astrophysicists offer a possible explanation for why dark matter seems to behave differently in the Milky Way.
Image 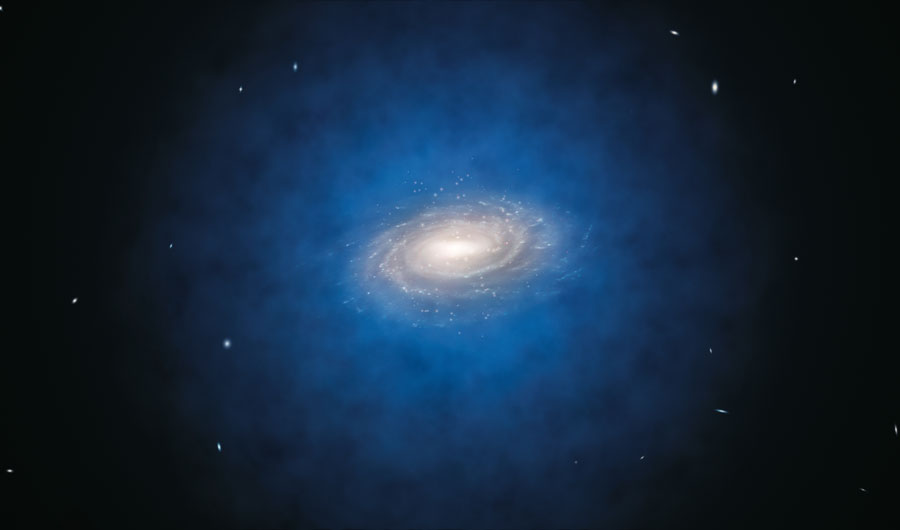 An artist’s impression of the Milky Way galaxy. The blue halo of material surrounding the galaxy indicates the expected distribution of dark matter if it were visible.

(Inside Science) -- When you stare into a night sky glistening with stars, even with the world's most powerful telescope, you can only see the roughly 20 percent of the universe that glows. The rest is composed of dark matter -- material that scientists have not yet observed directly, but believe exists because galaxies don't rotate the way they would if they contained only ordinary matter. Since dark matter particles are, by definition, dark, astrophysicists try to detect their presence indirectly. One way is to search for signs of phenomena that turn their darkness into light.

In the hot and dense early universe, dark matter particles, just like everything else, were so tightly packed together that they constantly ran into each other. These collisions sometimes resulted in annihilation events where mass was converted into energy in the form of light. As the universe continued to expand and cool, dark matter particles also became more and more spread out, and eventually were scattered too far apart for annihilation events to occur regularly. In astrophysics lingo, the particles had been "frozen out."

"But now that dark matter particles have come together again -- in galaxies that are tightly packed together, in the centers of galaxies -- dark matter particles can find partners to annihilate again," said Basudeb Dasgupta, a theoretical physicist from Tata Institute of Fundamental Research in Mumbai, India.

However, if all that's necessary for dark matter annihilation to occur is to have enough mass packed together, then we should also detect these gamma ray signatures from nearby dwarf galaxies, or galactic clusters -- but we don't. Based on this observation, Dasgupta and his colleague Anirban Das worked out a theoretical model that explains why dark matter particles annihilate each other in the center of our Milky Way galaxy.

They proposed that in addition to the distribution of dark matter particles, the annihilations also heavily depend on their velocities. Specifically, the particles need to be traveling at roughly 100 kilometers per second. If they are zipping around too fast or too slow -- even if they are closely packed together -- annihilations won't happen.

If the theory is true, it can explain why we don't see the same gamma ray signals from smaller or larger galactic systems -- the dark matter particles aren't moving at the right speed due to the size of the systems.

But what about galaxies similar to our Milky Way? They should also have dark matter particles traveling at the right speed to create gamma rays, and indeed, just a few months ago, the Fermi satellite operated by NASA detected gamma rays at the expected energy coming from Andromeda -- the nearest galaxy comparable in size to our Milky Way. According to the new theory, the two galaxies, and perhaps a third named Triangulum, are the only objects in our local group of approximately 50 galaxies that are the right “Goldilocks” size for dark matter annihilation.

So far, so good, but before we pop the champagne on dark matter, scientists first need to rule out other possible sources for these gamma rays. Could something else be spewing out the exact same gamma rays?

As big as Manhattan, as heavy as the Sun

"Imagine an object only 20 or so kilometers in size, but as heavy as the Sun, and it spins around almost a thousand times per second," said Christoph Weniger, describing a millisecond pulsar, an object that just happens to spew off gamma rays just like dark matter annihilations do. Weniger is a theoretical astrophysicist from the University of Amsterdam in the Netherlands not involved in the theoretical study.

"We know [millisecond pulsars] exist, but we don't know how many of them exist in the inner galaxy," said Weniger. "We will need to discriminate signals that look like many, many point sources, from something that is very smoothly distributed. The former would point to pulsars, and the latter to dark matter."

Several papers, including one published by Weniger's group, argue that pulsars are the more likely candidate for these gamma rays, but for now, astronomers can’t quite make that distinction with 100 percent confidence. For that, they will either need to take in more data (similar to using a longer exposure time in photography), find better ways to process the data (similar to sharpening images using software), or just build a better telescope, perhaps one of the dozens of proposed concepts being considered by NASA and other non-U.S.-based space agencies.

While scientists work to increase the sensitivity of astronomical measurements so that they can test ideas like Dasgupta and Das’ new theory, they are also searching for dark matter in another way. Researchers have built huge underground laboratories, shielded from the noisy rain of light rays and particles from outer space, where they hope to directly measure the faint signal of a dark matter particle nudging an ordinary atom.

For such direct detection experiments, “the sensitivities are now in the correct ballpark where we should be seeing one or two events perhaps,” said Dasgupta. “But we haven't seen anything so far." Even though the results to date have been negative, they have helped rule out many proposed candidates for dark matter particles, and are narrowing down the search little by little.

“We are now near the end of a very long journey,” said Dasgupta, with a hint of optimism. Once scientists obtain definitive evidence on dark matter, the existing theories and hypotheses can fall into place around the experimental results, completing a huge missing chunk in the current model of our universe.

But for now, the search continues -- up in space, underground and in the minds of researchers striving to understand the mysterious universe we live in.