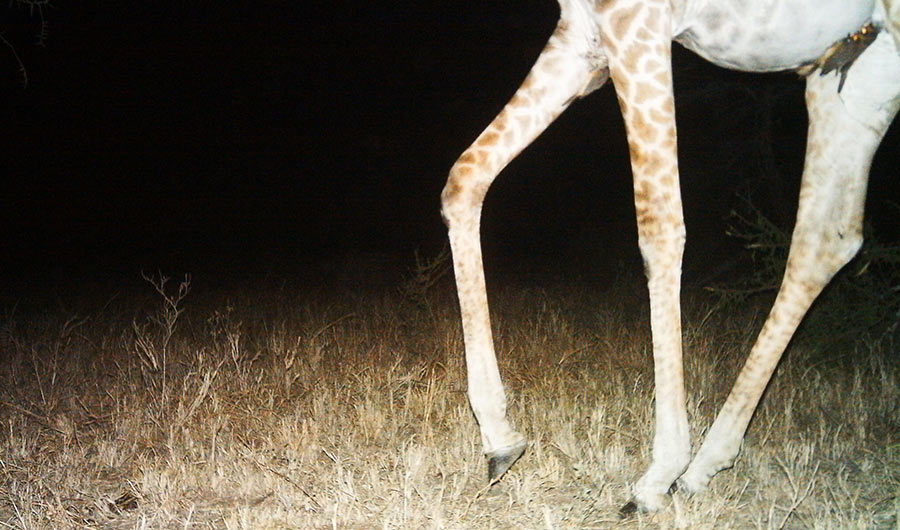 (Inside Science) -- When researchers first saw that their motion-triggered cameras had captured pictures of birds clinging to giraffes' crotches, they figured it was a fluke. But when they pored through their more than 1 million photos of Serengeti wildlife, they found that the yellow-billed oxpecker regularly roosted in the unexpected location.

"I found it over and over and over again," said Meredith Palmer, a behavioral ecologist and graduate student at the University of Minnesota in St. Paul. "They're primarily up there in the nether regions."

But the new study, published this month in the African Journal of Ecology, showed that the birds don't just stick with whatever host they happen to be on when the sun sets. During the day, they spend the bulk of their time on buffalo, which are more abundant than giraffes. At night, they apparently seek out giraffes, even though giraffes are comparatively rare. Out of 25 documented instances of oxpeckers roosting on mammals at night, 20 showed the birds on giraffes, while the remaining five showed them roosting on eland or buffalo.

Mike Mooring, a behavioral ecologist at Point Loma Nazarene University in San Diego, California who was not involved in the study, suggested a possible reason for the birds' nightly shift in host species preference. Buffalo may be more likely to lie down, he said, making them unstable roosts.

"The giraffes are not laying down. It's just way too cumbersome and difficult and dangerous for them to really do that," he said. "If you're an oxpecker, you might say, 'oh, this might be a better choice than a buffalo, which probably is going to be lying down a lot more.'"

The buffalo and eland carried their nighttime passengers on their backs and sides. But on giraffes, the birds preferred a different region, which Palmer referred to in her paper as "armpits" -- a term she admits is a euphemism.

It's possible that the birds' apparent preference for giraffe groins is partly a product of camera angles, since camera traps tend to offer views of the tall creatures' undersides. But the pictures themselves are hard to dismiss, with some showing as many as seven birds clustered between the long back legs.

Palmer doesn't know why yellow-billed oxpeckers are so fond of giraffes' nether regions, though she suspects it's because the spots are warm and safe, protected from predators and high enough to be out of the way of vegetation.

There's no word yet on how the giraffes feel about it.

"I can't imagine that it's particularly comfortable, with their tiny little claws digging in there at night," said Palmer. "I wish we had videos to see whether the giraffes are, like, scratching away."

ellow-billed oxpeckers spend their daylight hours pickingticks off a variety of large African mammals.(Snapshot Serengeti and the Serengeti Lion Project)

Buffalo are the oxpeckers' preferred hosts during the daytime.(Snapshot Serengeti and the Serengeti Lion Project)

During the day, camera traps documented 70 instances ofyellow-billed oxpeckers riding on buffalo, and just eightinstances of the birds on giraffes. (Snapshot Serengeti and the Serengeti Lion Project)

At night, oxpeckers' fondness for buffalo waned, with justtwo nocturnal instances of oxpeckers riding on buffalo.(Snapshot Serengeti and the Serengeti Lion Project)

Oxpeckers only rarely roosted on non-giraffe species at night,and when they did, they perched on the animals' backs or sides.(Snapshot Serengeti and the Serengeti Lion Project)

At night, giraffes were the favored roosting sites, with camera trapscapturing 20 instances of oxpeckers riding the lanky mammals.(Snapshot Serengeti and the Serengeti Lion Project)

Roosting oxpeckers seemed to have a particular fondnessfor giraffes' groins.(Snapshot Serengeti and the Serengeti Lion Project)