Nobel Prize in physics harkens back to Einstein's so-called "blunder" and points to new mystery.
Image 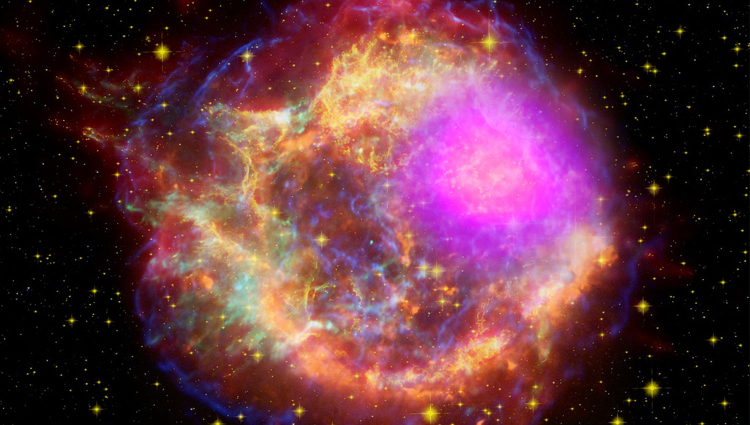 A supernova is a large explosion that occurs when a star dies.

(ISNS) -- The 2011 Nobel Prize in physics has been awarded to three American-born scientists for discovering that the expansion of the universe is surprisingly accelerating, and not slowing down, through the study of exploding stars known as supernovae.

One half of the prize will be given to Saul Perlmutter of the Lawrence Berkeley National Laboratory in Berkeley, Calif., and the other half jointly to Brian P. Schmidt of the Australian National University in Weston Creek, Australia and to Adam G. Riess of the Johns Hopkins University Space Telescope Science Institute in Baltimore "for the discovery of the accelerating expansion of the Universe through observations of distant supernovae."

"Imagine the amazement that the expansion [of the universe] was not slowing down but it was actually accelerating," said Uppsala University professor Olga Botner during the Nobel Prize announcement in Stockholm Tuesday morning. "The unreal feeling could be likened to the feeling you get if you in your car step on the brake and suddenly you realize that your car is actually accelerating."

Accelerating Off Of Einstein

"Perhaps the most striking prediction of his [Einstein's] theory -- and I don't think he even realized this prediction -- is that gravity isn't always attractive, that it can be repulsive," said Michael Turner, director of the Kavli Institute for Cosmological Physics at the University of Chicago. In Isaac Newton's classical theory, gravity can only be attractive.

But by the early 1920s, astronomical observations by numerous scientists showed that the universe was indeed expanding. Using a telescope atop Mount Wilson in southern California, Edwin Hubble and others looked at the Andromeda galaxy and saw evidence that it was moving away from our Milky Way galaxy. Hubble and others did this by measuring the light from bright, pulsating stars. By measuring how much the stars' movement altered their natural light -- making it appear more red -- they could determine how fast the star was moving away from our galaxy, similar to how a siren becomes lower pitched as it speeds away. Hubble and others saw that a galaxy's distance from Earth was proportional to its speed. Farther galaxies were moving away at a faster rate than closer galaxies. Space, it seemed, was expanding. These observations led to the Big Bang theory, which states that all the matter in the universe was initially in a compacted hot dense state before rapidly expanding outward into the universe we see today.

In the decades that followed, scientists assumed that over time the outward expansion of matter across space would slow down. Matter would start to attract toward other matter, galaxies would pull on galaxies, and clusters of galaxies would pull on clusters of galaxies – putting the brakes on the expansion. But scientists still wondered if the expanding universe would not only slow, but eventually collapse back onto itself as well.

"We had this very simple picture that every child knew," said Turner. "If there was a lot of matter in the universe, the universe would eventually collapse. If there wasn't very much, it would expand forever."

By the 1980s, however, scientists were again stumped. An extension of the Big Bang model, inflation theory was developed to explain how the very early universe underwent an extremely rapid expansion period before slowing down to the more gradual expansion pace that created the universe that we see today. But there was a problem: the universe contained only one-third the amount of known matter that inflation seemed to suggest was needed.

Researchers concluded that one way to solve the mystery was to bring back the cosmological constant.

In the late 80s at the Lawrence Berkeley National Laboratory, Perlmutter began the Supernova Cosmology Project to measure the brightness of Type Ia supernovae -- exploding white dwarf stars -- to determine the expansion rate of the universe.  These supernovae only occur about twice per millenium per galaxy. But for several weeks, they can release as much light as a galaxy normally emits.

"We found 42 of them. Each one represents a little moment in history going back billions of years," Perlmutter said during a teleconference on Tuesday. "Each one of them is sending you information about how much the universe has stretched since that time."

In 1994, Brian Schmidt of the Mount Stromlo Observatory in Australia led a competing collaboration, known as the High-z Supernova Search Team. Adam Riess, who shares half of the prize with Schmidt, performed data analysis on 16 Type Ia supernovae. They expected to see the speed of expansion slowing down.

But toward the end of the decade, both teams found that the supernovae were much dimmer than anticipated. They concluded that the universe is actually accelerating its expansion. The teams from both projects were in "violent agreement," Perlmutter recounted, repeating the phrase an audience member used when the results were first announced in early 1998 at a meeting of the American Astronomical Society.

"This was sort of a funny 'a-ha' moment to describe," said Perlmutter. The data analysis over the course of several months made it increasingly obvious that the acceleration was real.

"Most things that are weird turn out to be wrong. A lot of the most interesting things we see at some point were the weird things," Riess said during a teleconference today. "I think what gave us a huge leg up was in this discovery in 1998 was that you had two teams saying 'we saw the same weird things.'"

Turner coined the term "dark energy" in the 90s as a catch-all term for the mysterious repulsive force in the universe.

The findings of both projects were corroborated by subsequent measurements of the cosmic microwave background, the remnant radiation from the early universe. They suggest a present-day universe made of only 4 percent ordinary matter, 23 percent invisible dark matter and 73 percent of the mysterious dark energy.

"What we all now appreciate is that something is causing the universe to speed up," Turner said. "Until we understand dark energy, we don't understand the fate of the universe."

The missing piece could come from something resembling the cosmological constant, which would provide the unidentified forces needed to match what cosmologists are seeing. The additional forces causing expansion could come from empty space -- the vacuum -- which, according to quantum physics, bubbles with small amounts of energy that could provide a repulsive gravitational force. This force might even vary with time. But whatever the case, as space expands, dark energy might dominate even more, causing the universe to accelerate at an ever-increasing rate.

"The cosmological constant had such a bad reputation as kind of a scientific poison ivy or something, that you shouldn't touch it. It had Einstein's curse on it. It seemed like kind of a dangerous thing. Nevertheless you’ve got to see where the data takes you, where the evidence leads," said Robert Kirshner, a Harvard-Smithsonian Center for Astrophysics professor who served as doctoral advisor to both Schmidt and Riess.

Some hypothesized fates for the universe include a “big rip” more than 20 billion years from now, or a less violent fading away called a cosmic “red-out.”

The discoveries being celebrated today don't explain what is causing the acceleration -- only that it is happening. But in uncovering one cosmological surprise, the prize winners have opened up another profound mystery about the universe we live in.