Swimming in a straight line, not weaving, could indicate a problem.
Image 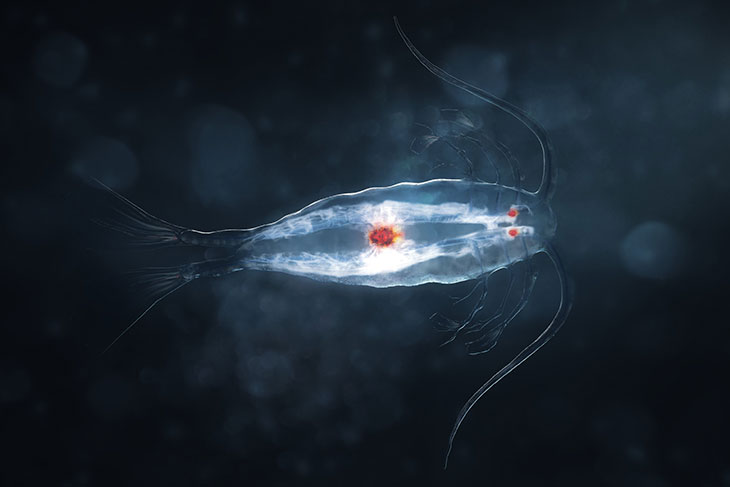 Tiny marine copepods are ubiquitous in the world's oceans and play an important role in food webs.

(Inside Science) -- Don’t let their wavy antennae or nearly transparent bodies fool you. Tiny crustaceans known as copepods may be more like humans than you think -- at least when they're intoxicated. New research suggests that after feeding on toxic algae some of the creatures act in risky ways that increase their chances of meeting an untimely end.

"It is a bit like being drunk," said Hans Dam, a biological oceanographer at the University of Connecticut who wasn't involved in the research, in an email. The alcohol itself may not kill you, he said, but it can "increase your chance of getting killed by engaging in risky behavior like driving a car while intoxicated, or, say, walking into a field of lions while drunk."

While most of us don't have to worry about being chased -- sober or not -- by lions, these copepods called Temora longicornis don't have the same luxury when it comes to their primary predators: other zooplanktonic animals and juvenile fish. Normally, the crustaceans try not to make things too easy for their pursuers, in part by swimming in slightly meandering paths that help them evade capture.

That behavior may change, however, when the copepods find themselves eating their way through dense patches of a species of microscopic algae known as Alexandrium fundyense.

The tiny plants are found naturally throughout the waters off the coasts of New England and southeast Canada and elsewhere. They are one of a few dozen species of phytoplankton -- out of thousands of benign species -- that produce potent neurotoxins known as saxitoxins that can accumulate in clams, mussels and oysters.

With enough sunlight and nutrients, the toxic phytoplankton multiply in droves, creating what scientists call a harmful algal bloom. The event, popularly known as a red tide, can lead to shuttered shellfish fisheries and outbreaks of shellfish poisoning among humans.

In recent decades, the number of these harmful blooms reported in U.S. waters and worldwide has increased dramatically, driven partly by excessive loading of nutrients like nitrogen and phosphorus in freshwater runoff and partly from improved monitoring programs that are better at detecting the events.

For years, scientists have studied the dynamics of these blooms -- the way they begin, develop and grow, and end. Figuring out why they stop, in particular, has been difficult, said Don Anderson, a biological oceanographer at Woods Hole Oceanographic Institution, in Massachusetts, who has studied harmful algal blooms for nearly forty years.

In particular, scientists have tried to understand how the toxins may impair the animals that consume the algae, preventing them from helping reduce the bloom. Those studies have probed the physical effects of the toxins -- does it kill, sicken, or reduce how well different species of zooplankton reproduce -- to get at an answer. But few studies have examined how ingesting the toxic algae affects how the organisms swim.

In the new research, the scientists set out to fill that gap, first collecting the flea-sized copepods from the Gulf of Maine where Alexandrium species are known to cause the harmful blooms. But the specialized optical equipment they needed to observe how the copepods swam was in a lab at Georgia Tech in Atlanta.

Luckily for the researchers, nearly every shipping store in Maine stocks the insulated boxes used to ship live lobster. "Still, we'd get strange looks from the people at FedEx," said co-author Rachel Lasley-Rasher, a zooplankton ecologist and researcher at the University of Maine's marine lab in Walpole. When the incredulous employees asked if they were shipping seawater, "we told them we were because that was easier than try to explain what a copepod is and that there were actually hundreds of them in each bottle we shipped," she said.

In Atlanta, the scientists exposed the copepods to the toxic algae in tanks. They found that after gobbling down the plants, the crustaceans swam faster and in straighter paths even after being removed from the phytoplankton's presence. That altered behavior is risky because models suggest that it may increase the number of encounters between the copepods and their hunters by 25-56 percent, making it more likely they'll end up as something else's dinner.

The copepod, Temora longicornis, feeds on the toxic phytoplankton, Alexandrium fundyense, by creating a current that transports the microscopic plants to their mouth. Courtesy of Rachel Lasley-Rasher.

That happens for two reasons, said Lasley-Rasher. When you swim or walk faster in a straight path, you're covering more ground and the rate that you encounter other things in your environment is higher. "Say you're walking around the block for an hour," she explained. "You're more likely to encounter more of your neighbors than if you're just pacing back and forth in your front yard for the same amount of time." While you might come face to face with the neighbor who talks your ear off, straight-shooting copepods risk life and limb.

And like speeding boats, when copepods swim faster they create a larger wake, making them more conspicuous to predators like mysid shrimp that cue in to such movements to find food, she said. The research was published today in the Proceedings of the Royal Society B.

"It's a result you wouldn't expect," said Anderson who wasn't involved in the research. "That's always fun in science. If anything, you might have guessed that something quite the opposite would have happened."

That's because previous research has shown that when other species of copepods -- and even some vertebrates like humpback whales and rats -- ingest high quantities of saxitoxin-laced food, they become lethargic, a result of the poison interfering with nerve activity which can lead to incapacitation, paralysis or death.

For now, the researchers are unsure why the toxin appears to speed the copepods up rather than slow them down. A few other studies have found similar stimulatory effects in other organisms that graze on toxic algae, but the mechanisms to explain the effect remain clouded.

Still, the research is helping scientists better understand some of the controls -- or lack thereof -- on harmful algal blooms and how their toxins may move through marine food webs.

"It's no longer enough to know that there are some copepods there that can eat the toxic algae" and not be directly killed by it, said Anderson. This research shows that the copepods may start to disappear for other, less obvious reasons like increased predation, he said. "It certainly complicates things, but it is also probably one step closer to reality."