From Tiny Neutron Skins, the Secrets of Neutron Stars

Physicists are looking inside atoms on Earth to learn more about mysterious neutron stars thousands of light-years away.
Image 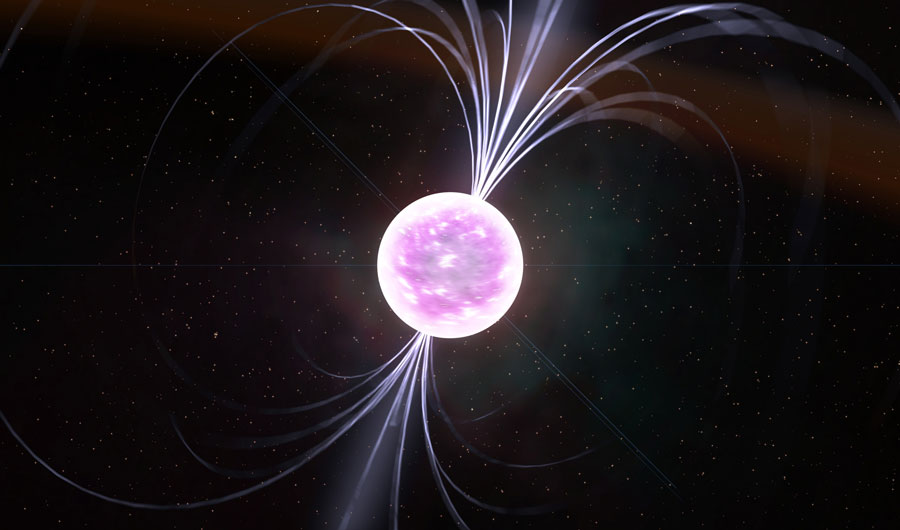 An artist's illustration of a neutron star.

(Inside Science) -- When an atom contains more neutrons than protons, strange things happen. An equal number of neutrons and protons clump together in the center, while the excess neutrons sit at the surface of the nucleus, forming a layer known as the neutron skin. By studying tiny neutron skins inside atoms here on Earth, scientists are trying to learn more about massive, mysterious objects far out of our reach -- neutron stars.

Last October, astronomers detected a neutron star merger directly for the first time, thanks to the freshly minted gravitational wave observatories -- LIGO in the U.S. and Virgo in Europe --which use detectors several miles long to measure the tiny vibrations caused by gravitational waves traveling through space. The detection suggested that neutron stars are significant sources for roughly half of all elements heavier than iron, from the gold in your grandfather's watch to the uranium inside a nuclear warhead. They are the alchemy furnaces of our universe.

A difference of more than 50 zeros

"Neutron skins are measured in femtometers, and the radius of neutron stars in kilometers, but the physics is the same," said Jorge Piekarewicz, a physicist and author of the paper from Florida State University in Tallahassee.

By measuring the thickness of the neutron skin in lead, which contains 82 protons and neutrons at its center and an additional few dozen neutrons in the skin, physicists can learn about how densely the excess neutrons pack among themselves, and use that knowledge to estimate the size of a neutron star.

Piekarewicz and his colleagues say that although the jury is still out, the data from last year's LIGO-Virgo detection hints that neutron stars may be smaller and denser than what prevailing neutron skin models predict.

Neutron stars are among the densest form of matter in our universe -- a teaspoonful would weigh 10 million tons. A neutron star is formed when a massive star collapses in a huge explosion known as a supernova, creating pressure so immense that protons and electrons are forced to combine and become neutrons. Piekarewicz and his colleagues now think that the pressure at the center of neutron stars may be so immense that their interiors may contain something almost inconceivably dense: quark-gluon plasma.

Quark-gluon plasma can only exist at super high temperatures or densities, or both, such as during the first few milliseconds after the Big Bang. And yet, the entire interior of a neutron star may be made out of quark-gluon plasma.

"During the early universe when the temperature was very, very high, nuclei are essentially driven into a soup called the quark-gluon plasma," said Piekarewicz. "In a neutron star, what can drive the transition is not very high temperature, but very high density."

Just like whether water will turn into ice or steam depends on not only the temperature but also the pressure, Piekarewicz suggests that even though neutron stars don't possess a high enough temperature to break down the neutrons into a soup of quarks and gluons, the high pressure may make up for it.

For now, uncertainties in the existing experimental data for both neutron skins and neutron stars are still too large to determine if the difference between the two warrants an explanation like the one suggested by Piekarewicz's team's paper.

"We experimentalists are extremely conservative people, and right now our error bars are still too large for making these claims," said Krishna Kumar, a particle physics experimentalist from Stony Brook University in New York, who was not involved in the paper.

Both particle physicists and astrophysicists hope to steadily improve their data for both neutron skins and neutron stars measurements over the next few years. Soon they may be able to say for sure if such a discrepancy exists.

"But this is certainly an important paper since it points out that there is a tantalizing hint that something might be there," said Kumar.