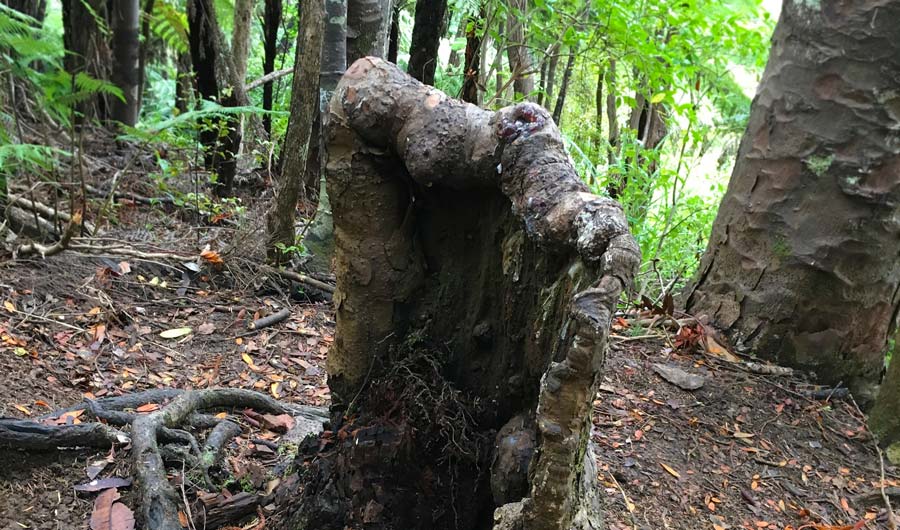 (Inside Science) -- In the wilds of New Zealand, scientists have found a tree stump has kept itself alive by linking its roots with those of neighboring trees to exchange water and nutrients. The existence of such a "wood wide web" suggests that similar networks may exist in other forests.

As the researchers were hiking in western Auckland in New Zealand, they stumbled across the stump of a kauri, an evergreen species whose trees are the largest in the island nation. They noted that although it was leafless, it was curiously still alive -- for instance, they saw it was still producing resin.

The scientists reasoned the stump may have grafted its roots with those of neighboring trees before it lost its foliage, helping it survive -- previous research found such grafts are common between living trees of the same species. To investigate their hunch, they implanted heat sensors and heating needles into the stump and two neighboring adult kauri trees. The needles released pulses of heat every few seconds, and the heat sensors monitored temperature changes to help deduce the speed at which the sap carrying this heat flowed.

"We experienced days with torrential rain, which we thought might impair our measurements," said study co-author Sebastian Leuzinger, an ecophysiologist at the Auckland University of Technology in New Zealand. "In fact, this turned out to contribute importantly to our results."

On sunny days, water evaporates and leaks from tiny pores in leaves, causing sap to flow up trees. However, the scientists found the reverse pattern with the stump -- sap flowed up it at night and while rain fell. Since the stump had no leaves to draw sap upward, they deduced this movement was driven by water flowing into the stump from other trees it was grafted to via its roots.

The researchers suggested that not only did the stump's links with other trees help it stay alive despite its lack of leaves, but the other kauri might benefit from their links with the stump as well. The grafts help expand the trees' root networks, granting them access to more water and nutrients, as well as increasing their stability on steep forest slopes. Even if a leafless tree in such a network no longer contributes resources, such as sugars from photosynthesis, the network could still let it live on almost like a pensioner, supported by surrounding, intact trees.

These findings suggest it might behoove scientists to shift from perceiving trees as lone plants to forests of superorganisms. "This is good evidence that a lot of individual organisms that we perceive of as working in a competitive manner actually interact in a far more complicated dance," said ecologist Ray Callaway at the University of Montana, who did not take part in this research.

It remains uncertain whether trees might have any way of severing unwanted connections -- not only from potential freeloaders, but also rivals and parasites. "Our assumption is that if you are connected to five, perhaps 10 or more neighboring trees, it will not be possible to identify one tree that is no longer contributing carbon to the network," Leuzinger said.

Future research can investigate the effects such networks might have for good or ill. For example, during a drought, trees with less access to water might boost their chances of survival through connections to trees with more access to water, Leuzinger noted. On the other hand, these links might also expedite the spread of diseases such as kauri dieback, which is blighting the New Zealand trees, he said.

Leuzinger and his colleague Martin Bader detailed their findings online July 25 in the journal iScience.