A Trip to North America's Galapagos

Searching for dwarf foxes and cloud forests on California's Santa Rosa Island -- a national park that the park service says is "like nowhere else on Earth."
Image 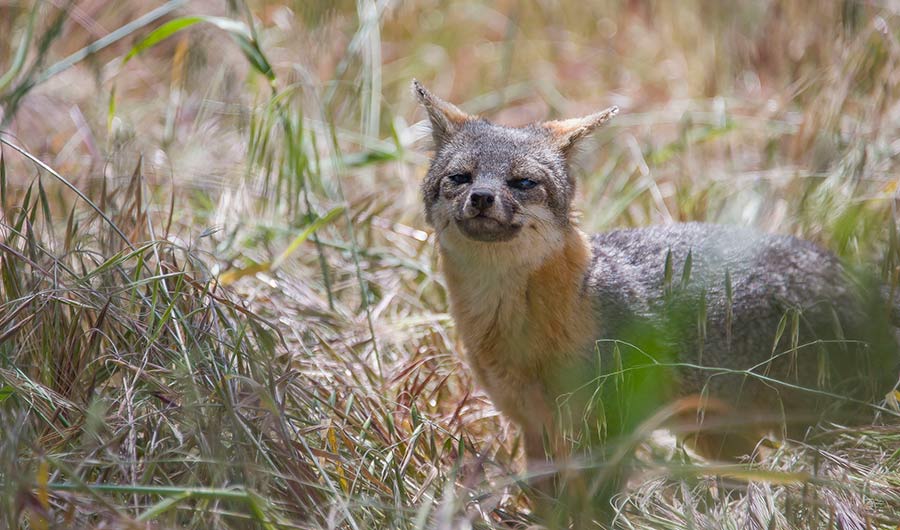 This picture of an island fox was taken on Santa Cruz Island, one of California's Channel Islands.

(Inside Science) -- For weeks, I had been promising my kids they would see baby foxes. It was my way of selling our camping trip. We were headed for the remote Santa Rosa Island, off the coast of California, where a boat would drop us off for the better part of a week. While there I also planned to find time to talk to local researchers about an effort to restore the island's native cloud forests and the remarkable program that brought the island fox back from the brink of extinction.

The foxes weigh the same as two AA batteries when they are born, I told my children. And the pups can fit in the palm of your hand.

The Channel Islands, or "North America's Galapagos," as Santa Rosa and its neighboring islands are sometimes called, are home to that fox and several other rare and unique plant and animal species. It's one of the more difficult national parks to access -- a long and often choppy two-hour boat ride from Ventura. Last summer, we arrived early in the morning, loaded our rucksacks, tents, duffel bags and day packs onto the boat, pushed out past private yachts with names like Pendragon, Big Dog, Margaritaville and Time Out and cruised past breakers and gently rocking buoys dotted with seagulls and seals at the harbor's mouth.

Once out in the open Pacific, we picked up speed. The coastal mountains faded, the boat rocked in the early morning surf and a voice on the loudspeaker warned, "If you're going to throw up, do it over the side."

A strange, salty and (relatively) untouched past

The Channel Islands are a tiny blip barely visible on a map of the continental United States. For the most part, the turbulent ocean separating them from the mainland left them isolated through the ages.

Animals rarely made their way here, though some species like the dwarf island fox somehow rafted or swam from the mainland thousands of years ago. Scientists disagree about the exact mechanism that accounts for their migration, and some hypothesize that they could have come in the canoes of the Chumash, whose beach villages dotted these islands for 13,000 years until their nations were decimated by measles, drought and Spanish incursions.

Some plants too are unique to these islands, their seeds carried there by birds, wind or some other means. Santa Rosa boasts a forest of rare Torrey pines, a coniferous throwback from a much earlier era in Earth's history that now is found in only two places on Earth (the other being in and around a golf course just north of San Diego).

In the 1800s Santa Rosa became one of the largest sheep ranches in California, with a herd of some 80,000 roaming the island. In the 20th century, the ranchers switched to cows, and they also stocked Santa Rosa with elk, deer, rabbits, quail and pigs -- at first to provide an additional food source but later to turn the island into something of a sportsman's paradise.

Around World War II, it was a destination for the well-heeled who came to bag wild game. Earl Warren, who served as California's governor and the country's chief justice, hunted there, and so did crooner Bing Crosby. Laurel and Hardy once filmed a movie on one of the island's cattle boats.

Not relying on the native species, the ranchers planted European grasses for the herds, and today some 70 percent of the island's ground cover is made up of nonnative grasses. Aside from that one legacy, however, very little of Santa Rosa ranching past remains -- outside of a few crumbling stockades clustered around the island's dock and miles of old roads that have turned the island into something of a hiker's paradise.

The day we arrived, I met Kathryn McEachern on the dock. A plant ecologist with the U.S. Geological Survey, she has been studying rare species on the Channel Islands for 25 years. I had arranged to interview her about a project that aims to restore some of the island's native cloud forests -- a special coastal ecosystem with scrubby bushes and undergrowth specially adapted to thrive in a land constantly bathed in wind and fog that blows in almost nightly from May through about September.

"Fog really matters to these plants," McEachern said. "It structures where they grow and sometimes influences which plants live and which plants die."

Historically, there were many different species whose cooperative action formed a cloud forest. The island's forest canopy has some incredibly large and ancient trees that belong to a species of oak that also grows on islands throughout Southern California. Historically, these trees grew in small groves and relied on other, more scrubby species in the cloud forest to provide a deep, wet bed of leaf litter to keep their acorns moist.

"Now that situation is gone -- the moisture is gone. That seed bed is gone," McEachern said. "Vegetation is absent and we don’t see much reproduction at all in any of the plants that are up there."

A few years ago, McEachern started a project to improve the understanding of the Channel Islands' plant-fog ecology, to look at how native plants harvest moisture from the fog and to test ways of restoring the dense, moisture-harvesting cloud forests. In recent years, she has enlisted K-12 teachers to do field work to support the effort through a program sponsored by California State University.

After setting up the tents with my kids and dining on canned beans warmed over a camp stove, the next day I met McEachern with several of her teacher-interns in the small, single-level L-shaped building that serves as a classroom, research station and kitchen. I sat down and recorded interviews with the group.

[Clarification (June 14, 2019): The first shot in this video is of San Miguel Island, which is just west of Santa Rosa Island]

After the interviews, we piled into large pickup trucks and climbed 10 miles up the bumpiest and most washed-out roads I have ever seen, before finally arriving at their field site -- an ancient grove of massive old island oak trees near the summit of a desolate peak known as Black Mountain.

One of the restoration project's goals is to study how to slow erosion and keep organic matter like leaves and sticks trapped on the mountainside. They have installed drip irrigation systems, planted native species and installed erosion control devices called wattles, which are basically galvanized wire fencing covered with stretched fabric. The fog wets the fabric, and the moisture drips down to water the plants in the undergrowth. That attracts more vegetation, establishes microbes, and supports both carbon respiration and composting in the soil.

"If you dig down in this leaf stuff here," McEachern said, "it’s developing this kind of mushy concoction down lower." When they started, the land was basically barren rock, she said.

McEachern also pointed out some elderberry bushes that they planted a year earlier. "Just for kicks," she said.

And as we toured the site, a dwarf fox appeared, sat for a while under the shade of one of the massive oak trees, and then wandered on. It's rare to see them this high up on the mountain, one of the researchers said.

Fox versus eagle versus ranger

Though we never did get to see the baby pups, my kids and I got our fill of the dwarf fox parents in our camp site where they darted around during the day. We were warned not to feed them, and to keep our food in the camp's steel boxes. The need for such vigilance acts as a testimony to one of the most successful captive breeding programs of all time.

On the brink of extinction just a few years ago, the Santa Rosa Island fox made a remarkable recovery thanks to a federal protection program, said Laura Shaskey, a wildlife biologist with the National Park Service. The day I met Shaskey, toward the end of the trip, she was coming back from a 5:00 a.m. trip to the far side of the island to trap and tag foxes and track their survival.

Island foxes are a distant relative of the California gray fox, which is found on the mainland. Their dwarfism is a classic trait often seen in isolated populations of island dwellers. Because island resources are limited and may fluctuate year by year, island foxes have adapted to an unusual diet of plants, Jerusalem crickets and a smattering of smaller animals like lizards and island deer mice.

All that adaptation almost went for naught two decades ago. Around the time the National Park Service acquired the islands, park staff began to monitor the foxes, and they soon detected a massive decline in the population.

The culprit was a nonnative predator -- golden eagles, which migrated to the Channel Islands after native bald eagles disappeared. Where the bald eagles were mostly marine hunters, golden eagles prey more on land animals. At first, they preyed on the baby pigs and deer fawns that had been imported during the ranching era. But when the island transitioned into a national park and rangers began removing those nonnative animals, the golden eagles turned to the foxes, whose daytime foraging made them especially vulnerable.

The effect of the killings reverberated beyond the foxes, as is often the case in a carefully balanced ecosystem. Because foxes are voracious hunters and a top predator on the island, they were a keystone species. Where their numbers declined, the populations of deer mice and spotted skunks grew very, very high. The exploding mouse and skunk populations then impacted bird populations because those mammals began to excessively forage eggs.

What saved the foxes was a concerted effort by scientists, veterinarians and naturalists from the park service, the Nature Conservancy and other organizations, which led to one of the fastest rebounds of any mammalian species in the history of the Endangered Species Act.

All the foxes on Santa Rosa Island were captured and kept in captivity on the island for eight years, where they were bred to recover the population. At the same time the golden eagles were captured and relocated to their native Northern California, and about 60 bald eagles were reintroduced to the Channel Islands.

"In just over a decade, the population had rebounded from record lows to, you know, very self-sustaining populations; some record highs in some cases," Shaskey said. Historically Santa Rosa Island may have had about 1,400-1,500 foxes. Last year, Shaskey and her colleagues estimated 1,850 foxes on Santa Rosa.

"They're resilient," she said.

Also resilient were my children for putting up with sleeping in tents for a week on a hot and dusty remote island that you need to take a choppy two-hour boat ride to access. On the way home, we saw a kelp forest, dolphins, blue whales, bald eagles and one of the largest sea caves in the world. As we pulled away from dock a loudspeaker voice reminded us, as our welcome back to civilization, "If you're going to throw up, do it over the side."

Editor's Note (June 14, 2019): This story has been corrected to remove a reference that incorrectly called Black Mountain the highest peak on Santa Rosa Island. The highest peak on the island is in fact Soledad Peak.