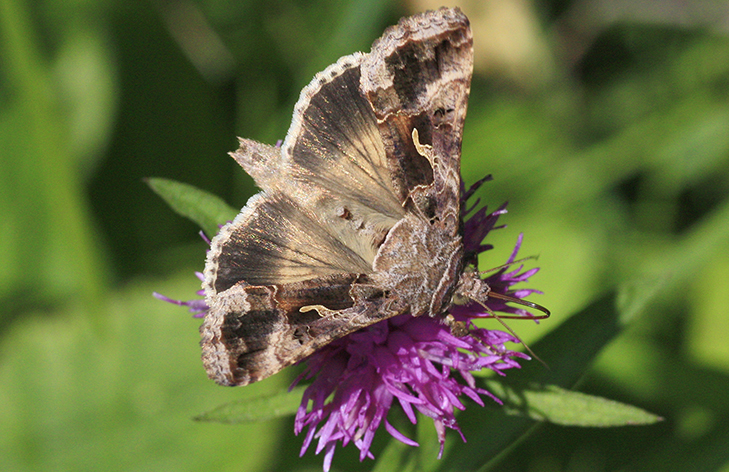 (Inside Science) -- Like sailors putting a finger to the wind, migrating moths check the atmospheric conditions around them and adjust their headings accordingly, a new study finds. They do it by sensing turbulence, which helps them determine whether the wind is blowing them off course.

Scientists already know moths, birds, bats and other airborne nocturnal animals navigate using landmarks and their own internal compasses. They also must account for wind and atmospheric conditions, which can buffet them around. But researchers haven't determined how animals do this -- do they look at the ground to double-check their routes, or somehow check the wind itself? A quirk of atmospheric physics pointed to the answer.

"Imagine you're in a hot air balloon, drifting with the wind at night, and you closed your eyes. And someone said to you, 'Which way is the wind blowing?' You would have no idea," said Jason Chapman, a biologist who studies animal movement at Rothamsted Research in England and who co-authored the new study. "You're moving in the fluid, the air, and you're in a sensory vacuum."

But the rules of fluid dynamics can provide a clue. The ride gets smoother, or less turbulent, when you head downwind. That means you could use any change in turbulence to determine which way the wind is blowing -- and which way it's carrying you, Chapman said. Then you could make course corrections using a compass or another navigation system.

Using radar, Chapman and his colleagues determined a common European moth called silver Y moths (Autographa gamma) do this. Their paper, appearing in this week's issue of Current Biology, is the first to demonstrate this navigation ability in any migrating animal.

Chapman and colleagues from Lund University in Sweden combed through radar data on thousands of individual insects and birds moving throughout northern Europe from 1999 through the present day. They checked the animals' migration paths, more than 10,000 examples in all. The team suspected a phenomenon called the Ekman spiral would provide their smoking gun.

The Ekman spiral is a consequence of the Coriolis Effect, which results from the Earth spinning on its axis. In the Northern Hemisphere, atmospheric currents shift clockwise with increasing altitudes, resulting in variable wind directions. This makes it difficult for migrating animals to tell which way the prevailing wind is blowing. Turbulence cues can therefore mislead them, causing them to over-correct. In the Northern Hemisphere, an animal trying to stay on course will tend to misalign itself slightly to the right of the downwind direction. In the Southern Hemisphere, they would err on the left.

Radar imaging showed the European moths did over-correct to the right, suggesting they're testing the winds rather than checking the ground below. A balloon rider wouldn't be able to detect the subtle directional changes at work in this study, which occur at fractions of meters per second. But for silver Y moths, it's a strong signal, Chapman said.

Songbirds weren't fooled, however, said Cecilia Nilsson, a coauthor at Lund University who studies bird migration. They showed no difference in response to turbulence, suggesting they instead use visual cues from the ground.

The moths are small and much more susceptible to buffeting by the wind; they also rely on it more heavily to move around, said Massimo Vergassola, a physicist at the University of California, San Diego who was not involved in the work. They would be under more evolutionary pressure than birds to attune themselves to the winds, he noted.

"The problem is these chemicals are transported by the wind, and the winds are turbulent, exactly like in this case," he said. "The fact that they can sense turbulence and adjust is interesting for the kinds of studies we are doing. It's something that we had postulated, but we never had any evidence."

This paper is the first to demonstrate this finger-to-the-wind ability in any migrating animal, but it likely won't be the last. Nilsson points out that any flying or swimming animal must determine how much and in which direction the current displaces them. Zooplankton, juvenile sea turtles and other marine animals have been hypothesized to sense currents directly.

The researchers still don't know how the moths do this, however, or how they distinguish atmospheric turbulence from their own wakes, which they create by beating their wings. Insects are known to use their antennae to sense flows, and related organs called Johnston's organ and Bohm's bristles are also sensitive to tiny forces, said Tom Daniel, a biologist at the University of Washington who studies insect flight. But the mechanisms involved in turbulence sensing are still unknown.

Chapman said the true test would be to replicate the experiment in the Southern Hemisphere to see whether migrating animals veer to the left, once again using the Ekman spiral as proof.

"It's a quirk of physics which has allowed us to discover a biological mechanism," Chapman said.