Understanding How Scallops View the World

Using tools from many scientific disciplines, researchers gain detailed insights into how the many-eyed mollusk sees its watery home.
Image 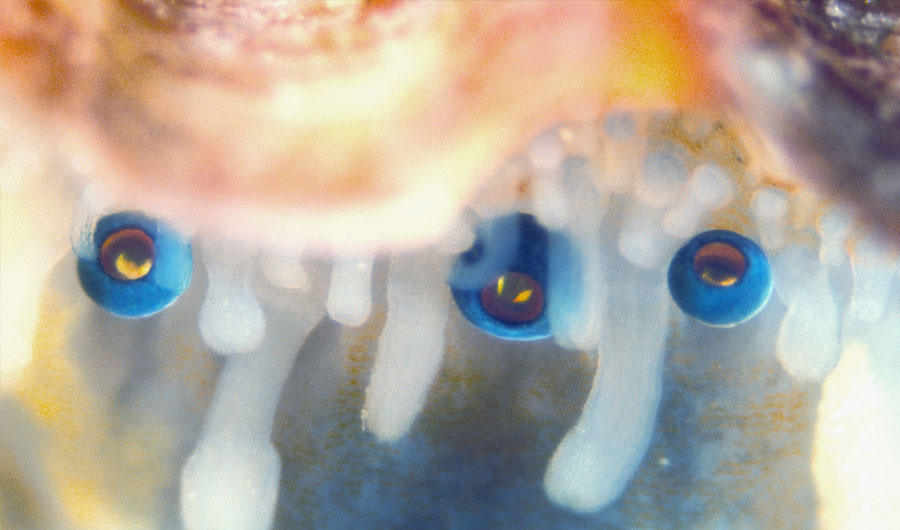 (Inside Science) -- Did you know that scallops have eyes? And not just two, but up to hundreds. If that fact surprises you, you’re not alone. Benjamin Palmer, a chemist at the Weizmann Institute of Science in Israel, said he didn’t really know about the eyes until just a few years ago, although he had been vaguely aware of “something weird” about the ridged shellfish for longer. Still, he has since become intimately acquainted with the scallop’s visual system.

Recently, Palmer and his colleagues from the Weizmann Institute and Lund University in Sweden deployed a suite of techniques from across scientific disciplines to uncover intricate details about the bivalve’s unusual eyes. They published their findings -- including a possible explanation for why the eyes have a double-layered retina, or light sensing structure -- online today in the journal Science.

The team studied the eyes of Pecten maximus, or the king scallop, a species that lives at depths of around 20 meters in the Atlantic Ocean, primarily off the European coast. It has dozens of tiny eyes, each about a millimeter wide, that are visible near the edge of its shell when it opens.

In the mid-1960s, Michael Land, a British biologist, discovered that a curved mirror at the back of king scallop eyes focuses the light onto the retina, similar to how a reflecting telescope might focus light onto a detector. Land also found that these mirrors contain many layers of small crystals made from guanine, a compound that is also one of the four main bases of DNA.

Technological advancements since the ’60s allowed Palmer and his colleagues to gain an even more detailed picture of how the eyes are put together. By freezing the mirror parts of the eye rapidly under high pressure and then looking at them in a scanning electron microscope, the team observed 20 to 30 layers of square guanine crystals, each about 1,000 nanometers wide and about 70 nanometers thick. The square shape of the crystals, which is unusual for guanine, allows the scallop to completely tile the surface of the mirror. Each layer of tiled crystals is separated from the others by a thin layer of cytoplasm, a jellylike material that fills cells, while the spacing is tuned to reflect the blue-green light that reaches the scallop in its underwater habitat.

The team also put the eyes into an X-ray scanner -- somewhat like a miniversion of the CT scanner you might find in a hospital -- to measure the overall shape of the mirror and show how it was positioned in the eye. The researchers then used these measurements to trace how rays of light would travel once they entered the eye. That result may explain a mystery about the animals' eyes -- why they have retinas with two layers.

The ray-tracing experiments revealed that light from directly in front of the eye would focus predominantly on one layer of the retina, while light from the periphery would focus on the second layer. The image that forms on both layers is blurry by human standards, but sophisticated for a bivalve. 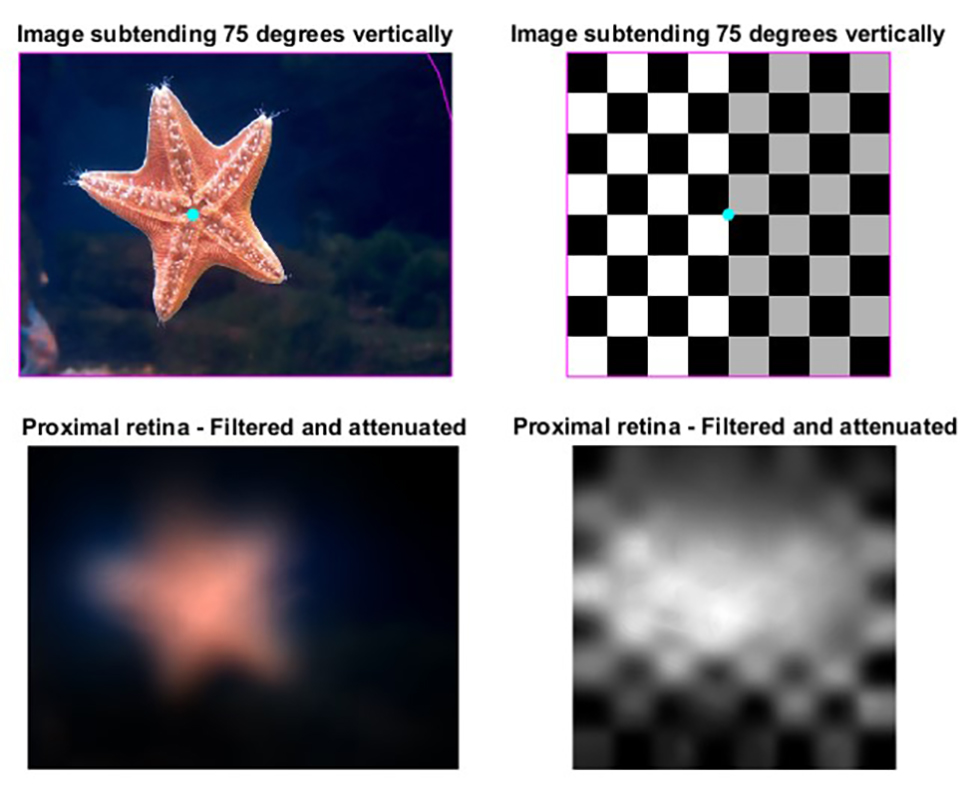 3D ray-tracing simulations of images formed on the proximal (lower) retina of the scallop, which focuses light mainly from the periphery of the eye. The starfish is one of the main predators of the scallop.

Rights information: This image may be used by news outlets to accompany this Inside Science story.

Dan Speiser, a biologist at the University of South Carolina in Columbia who studies scallop and other invertebrate eyes, said he was impressed with the extremely detailed picture of how the crystals were arranged in the mirror. “Honestly, I wish my colleagues and I had been able to publish this paper,” he said.

Michael Land, who is now an emeritus professor at the University of Sussex in the U.K., said in an email that while the micro-CT scans in the new paper showed that the mirror is slightly flattened and tilted off-axis, his own experiments convinced him that it was an undistorted spherical surface, which only focused light on one layer of the retina. He wrote that he would need "a lot more reassurance" that the methods used to prepare the eyes did not distort them, because the results didn't fit his own observations.

Palmer did note that the team performed micro-CT scans on both fresh and chemically preserved eyes. The similarity in the shapes of the mirrors they observed in both kinds of eyes convinced them that the visual performance of the two groups would be extremely similar.

Patricia Dove, a geochemist at Virginia Tech who specializes in biomineralization, said the range of technology that Palmer and his colleagues used was impressive. “Each time some new instrumentation comes along, we come to a new threshold of our understanding,” she said.

You might wonder whether getting to know scallop eyes on such an intimate level would make the scientists view a plate of the seared seafood delicacy in a new way. But it’s not a problem Palmer himself has encountered. “There’s a certain irony in my research,” he said. “I’m allergic to shellfish.”