Some evidence suggests that foxes may be trying to domesticate themselves.
Image 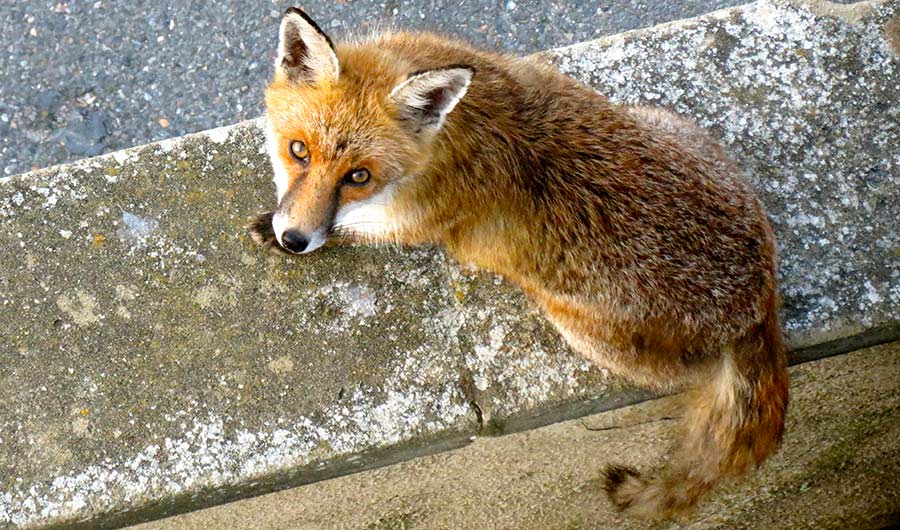 (Inside Science) -- It is almost as if foxes, seeing people walking and feeding presumably happy dogs, decided it was time they changed their lifestyle.

New evidence from a British study suggests that foxes may be domesticating themselves.

Dogs, wolves and foxes are all part of the same family, canids. Foxes are found around the world and the red fox, Vulpes vulpes, is the most widely distributed land carnivore. They typically live in rural areas, but since the 1930s, foxes have increasingly moved into British cities. They are now a common sight in American cities as well.

Scientists know that domesticated dogs evolved from a distinct version of the gray wolf beginning about 20,000-30,000 years ago. Twelve thousand years ago, these wolf-descended dogs began to domesticate themselves, becoming more friendly and accustomed to proximity to people, possibly because they could scrounge food from human settlements. Today, with the possible exception of a few breeds like huskies, dogs no longer look very much like their wolf ancestors. Think of chihuahuas.

There is no evidence in human history that foxes were ever kept as pets, although the body of one was found in the grave of a human in Lebanon. The grave was dated 14,500-11,600 years ago. No one knows what happened.

The story of domesticated foxes began in the 1950s when geneticist Dmitri Belyayev, working at the Institute of Cytology and Genetics in the then Soviet city of Novosibirsk, began breeding silver foxes he obtained from a Canadian fur farm. He wanted to see if foxes could be domesticated by selective breeding. He tested 180 foxes from the farm, selecting the animals that seemed the friendliest and calmest.

Belyayev believed that selecting for tameness and against aggression would lead to hormonal and neurochemical changes in subsequent generations. Those changes, he thought, would eventually lead to physical changes in the foxes.

Within 10 generations, the selected foxes behaved like dogs. They were not afraid of humans, liked being petted, licked trainers’ hands and feet, whined when they wanted attention and remained calm in tense situations. They even wagged their tails when they were happy.

He also bred foxes that were nasty and aggressive.

Importantly, his calm foxes changed both physiologically as well as temperamentally. Their hair grew colored spots, their tails curled, and their ears, instead of staying upright as their wild cousins’ did, flopped. The latter was important because besides elephants, no wild animal has floppy ears. Even Charles Darwin knew that. But Belyayev’s foxes did. Belyayev died in 1985 but the experiment is ongoing in Russia with about 100 foxes. To raise funds, the Russian scientists have sold tamed foxes as pets or for their fur.

Not all biologists agree with his findings.

The combination of the behavioral and the physical changes of Belyayev’s foxes is called the domestication syndrome. Whether such a thing even exists is part of the controversy.

In December 2019, researchers at the University of Massachusetts Medical School and the Broad Institute at MIT and Harvard published a paper challenging the Russian study. Belyayev’s “domesticated” foxes, they wrote, were not exactly feral when the experiment began since they came from a fur farm. His results, they claim, were overstated.

But something is clearly happening with foxes in nature, animals that were not raised on a farm. Early on, biologists recognized that urban foxes are different from their brethren in rural areas.

The British scientists studied the skulls of 274 foxes -- rural and urban -- taken from museums, and found distinct differences that followed the pattern of domestication syndrome, said Kevin Parsons, a senior lecturer at the University of Glasgow. They published their findings earlier this month in the journal Proceedings of the Royal Society B.

Humans set the environment that led to the changes, Parsons said, and those changes could come in only a few generations.

Parsons’ group studied the morphology of the foxes. Urban foxes, they found, had wider, shorter muzzles and smaller brain cases than those in rural areas. Also, the urban fox males and females were more similar to each other in shape than the rural fox males and females were to each other, what biologists call reduced dimorphism, consistent with the domestication syndrome. Parsons said diet plays a large part in some of the changes. Urban foxes need a stronger bite for the food they eat in cities, he said.

He did not expect the smaller brain cases, which could mean smaller brains, he said, contradicting idea that urban life requires more cognitive skills. Parsons said biochemical changes in the brain may have made up for it.

Other researchers have looked into the genetics of urban and rural foxes. A Russian group found 179 differences in gene expression. How the changes happened is not known, and is at the core of the issue. One gene in particular, SorCS1, seemed to be involved with tameness.

The overarching question is, what does it mean for an animal to be domesticated? Zebras, which look like striped horses and can reproduce with horses (zorses) or donkeys (zonkeys), can’t be domesticated. Few people have managed to ride one, in part because of the animal’s nasty disposition which discourages domestication.

Marc Bekoff, professor emeritus of ecology at the University of Colorado, defines domestication as “when one organism assumes a significant degree of influence over another to secure a predictable supply of resources from that second group.”

Dogs let humans influence their lives and their evolution. Foxes may now be doing the same.