A mathematical model that visualizes echo chambers on Twitter shows how they coevolve with polarization on controversial topics.
Image 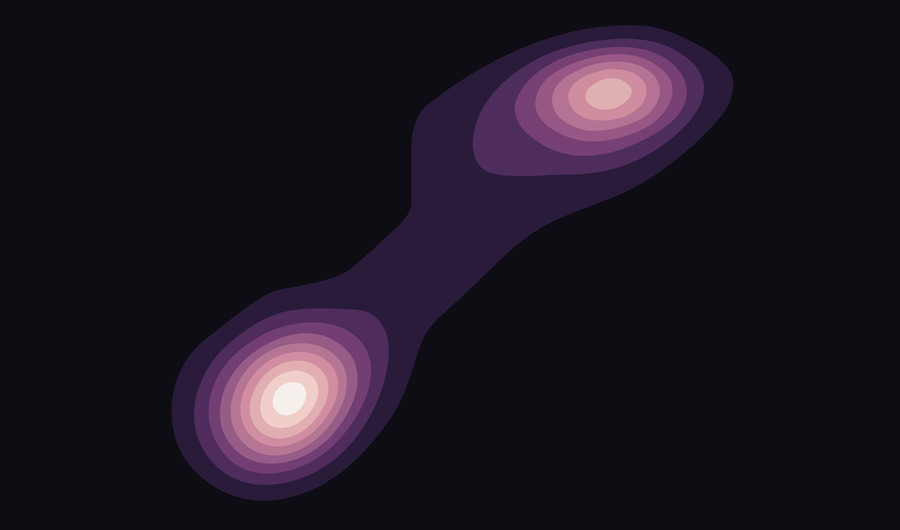 (Inside Science) -- The picture at the top of this story is not a blurry image of two colliding galaxies or a splitting cell viewed through a microscope. It is a snapshot of today’s divided America.

On the left is a blob representing Twitter’s liberal echo chamber, and on the right, a blob for the conservative one. The brightness of the blob represents the concentration of tweets that echo other tweets with similar opinions. The researchers who generated the plot described their method in a paper published in Physical Review Letters in January.

You may have heard of the terms “echo chamber” and “filter bubble.” While they are sometimes used interchangeably, they mainly refer to two different features in online discussions. The term echo chamber describes a phenomenon where people tend to interact with those whose opinions are similar to their own, and filter bubble describes the phenomenon of people not interacting with opinions different from their own.

“In our model, we looked at homophily, which refers to how people with the same opinion or similar opinions are more likely to interact with each other,” said Fabian Baumann, a physicist from Humboldt University of Berlin in Germany and an author of the paper.

“If people interact constructively, I would give you my opinion, and you would give me yours, then we would meet in the middle,” said Baumann.

The researchers found that while an overall consensus is possible, echo chambers could cause the discussion to destabilize and become polarized if the topic meets a certain level of controversy. Once a discussion is polarized, subsequent exchange of information would strengthen the echo chambers and drive the two groups further apart.

The visualization of echo chambers in the liberal and conservative Twitter spheres surrounding Obamacare, abortion and gun control. Readers can refer to Baumann et al. for more detailed definitions of the axes and parameters.

Their data also showed that because more active Twitter users tend to have more extreme opinions, they play a significant role in the polarization of online discussions, especially for politically controversial issues. This may help amplify extremist ideas otherwise limited to a smaller population.

In addition to analyzing real-life data, Baumann’s paper also provides a mathematical model for predicting if a discussion online would become polarized based on the strength of the echo and what they dubbed as the “controversialness” of a topic, and proposes ways for quantifying these parameters. It may provide a starting point for studying the polarizing effect of echo chambers for different social and political issues.

Baumann acknowledges the need to also consider the filter bubble side of the equation explicitly, which they did not include in their model, and how online users may be repulsed from opinions different from their own due to personal preferences or algorithmic filters -- or a coevolution of the two.

“There have been studies that tried modeling constructive interaction as well as repulsive interaction, but most of the time it has been difficult to compare them to real data,” said Baumann. “Ultimately, we should combine all these effects, but right now, to quantify which one is more dominant, it's really hard to say.”

Among all the popular social media platforms, Twitter is perhaps the favorite choice for academic researchers to study because it is easy to access and because their users interact with each other in ways that are easy to quantify in mathematical models.

“How Twitter works naturally makes it really easy to be studied. There are basically just tweets and retweets, and these interactions are very easy to quantify,” said Baumann. “As soon as you have an account, you can pretty much read everything on Twitter. For Facebook, it’s a lot more difficult.”

Facebook, by far the most popular social media platform in terms of number of active users, has privacy options that make the platform more difficult to study compared to Twitter, which in essence is an open forum where every user can interact with each other in view of everyone else.

“Academics have, in a sense, been our own worst enemy as far as access to Facebook’s data goes,” said Joe Walther, a social scientist from University of California, Santa Barbara, referring to the Cambridge Analytica scandal that originated as a research project by a data scientist at Cambridge University in the U.K. “It's hard to blame Facebook for shutting off outside access to their data.”

The tendency of researchers to focus on Twitter may lead to results with underlying biases and blind spots. Still, the results provide at least one lens on the polarization that many perceive as widespread in American society today.

Good for business. Bad for society?

“Echo chambers may be harmful from a societal perspective, because they drive polarization,” said Walther. “But as long as they also drive user engagement, they allow tech companies to sell more advertising or charge more for their advertising, which is attractive from a corporate perspective.”

Since user engagement is a crucial part of the business model of companies like Twitter or Facebook, there is little financial incentive for them to rein in echo chambers as long as they help generate revenue.

But before we reach for our virtual pitchforks and demand action from Twitter and Facebook that may limit online speech, Walther urged that we need to better understand echo chambers first. While the internet has provided a platform for niche groups with insular perspectives, such as people opposed to vaccination or people who think the Earth is flat, Walther said the accumulated research is unclear how much of an effect echo chambers have on broader social and political issues.

“I don't want to advocate censorship, but sometimes having absolutely no limits can lead to some not-so-good things,” said Walther. “And in order to think about policies and how we should adjust these platforms, we need an intellectual foundation before we can take that next step.”