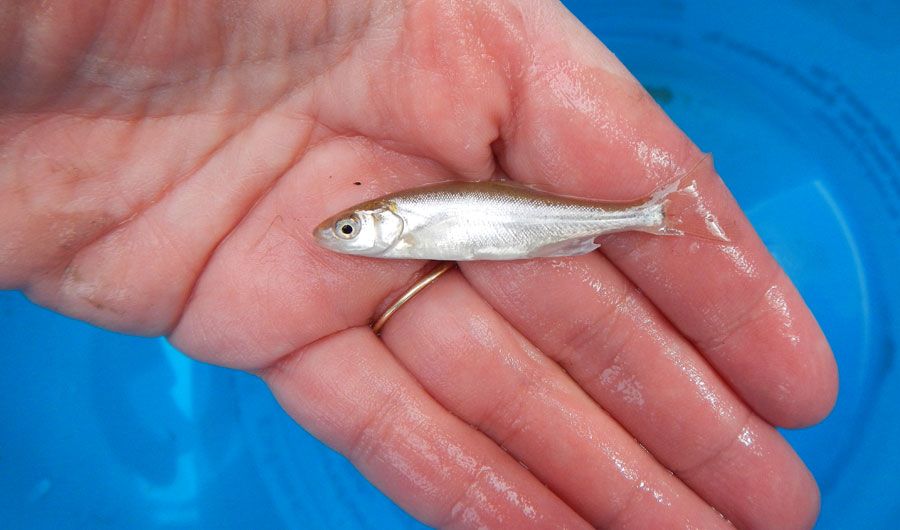 (Inside Science) -- Your grandfather's nostalgic memories are probably right: Fish today aren't as big as they used to be. And while some are quick to blame the fishing industry for killing our largest fish, mounting evidence suggests that climate change also plays a role. Now, evidence from 74 fish species in the Mediterranean Sea has helped confirm why some types of fish are shrinking. Warm water limits fishes' growth by starving the animals of oxygen. And in a new development, it turns out that active fish species are the most sensitive, which could mean that speedy predators will no longer grow big enough to kill their sluggish prey.

"What we found is that more active species react more to temperature, and reduce their body size faster," said Itai van Rijn, a fisheries ecologist at Tel Aviv University in Israel and first author of a recent study in the journal Global Change Biology. "The effect on different species will be different, which can cause all sorts of changes in how the community behaves."

While data on wild fish populations are limited, several studies have reported declining body sizes in commercially important fish species over the past few decades. Smaller fish provide less meat for people to eat, and they also produce fewer viable eggs, potentially reducing the number of fish available to catch, said Alan Baudron, a marine ecologist at the University of Aberdeen in Scotland who was not involved in the study. Thus, smaller fish could mean losses for the fishing industry and less nourishment for many coastal communities that rely on fish for protein.

Fishing can reduce the average size of fish in a population, both because people often preferentially harvest large fish, and because fishing can create evolutionary pressure to mature fast and breed young. But at the same time that fish have been shrinking, oceans have been growing warmer in many parts of the world, said van Rijn. Rising temperatures could contribute to declines in fish size because of the difficulty fish face obtaining oxygen.

"Water is really thick, so you can imagine it is actually quite an effort to pump oxygen through your body, compared to just breathing air into your lungs," said William Cheung, a marine ecologist at the University of British Columbia Institute for the Oceans and Fisheries in Vancouver, who was not involved in the study.

Large fish need more oxygen than small fish. But as fish grow, the surface area of their gills increases more slowly than their overall body size, causing the gills to become proportionately smaller, said Cheung. Each fish is thought to have a maximum size it can reach before becoming oxygen-starved, and this upper limit depends in part on the temperature of the water. Fish need more oxygen in warm water because the heat increases their metabolic activity, so fish in warm water might have stricter restrictions on their growth. This can both reduce the size of fish in a population and drive populations to move to colder waters.

Cheung and his colleagues have estimated that under high-emissions scenarios, warming oceans will cause a 14-24 percent reduction in the average body mass per fish worldwide in the first half of the 21st century. But while laboratory experiments support Cheung's model, few studies have tested it in wild populations, and some researchers remain skeptical of the real-world impacts, he said.

In the new study, van Rijn and his colleagues used data from more than 300 publications to determine the maximum body length of various fish species at sites around the Mediterranean. The data were mostly from recent years, so there was no way to track changes over time. But the researchers could compare the same species of fish in different locations, and they knew how ocean temperatures varied from place to place. On average across species, each temperature increase of 1.8 degrees Fahrenheit equated to a 5 percent reduction in maximum body size.

The researchers believe this difference is unlikely to be caused by fishing. For one thing, there is no reason to think that people have fished more in warm parts of the Mediterranean than in cold parts, said van Rijn. People have fished intensively all over the region for millennia, including in the colder, more northern parts bordering Greece, Italy, Spain and France. Moreover, when the researchers included in their analysis a measure of each species' sensitivity to fishing, the sensitivity metric did nothing to explain fishes' variations in size.

But the strongest piece of evidence for the oxygen limitation idea was how the effects varied between species. Physical activity increases the amount of oxygen a fish needs, so the researchers predicted that active species would suffer more in warm water than sedentary ones. Indeed, the most energetic species in the study were twice as sensitive as the average species, experiencing a 10 percent drop in maximum size for every 1.8 degree increase in temperature.

The discovery raises questions about the future of the ocean's food webs, said Baudron. Many of the most active fish species are predators that rely on speed and agility to chase down their prey. Many prey species, in contrast, are sedentary fish that will be relatively unaffected by warm waters. As oceans continue to warm, the shrinking predators may eventually find themselves too small to kill the fish they used to eat.

"Body size in ecosystems is very important, because it determines who eats what," said Baudron.

Even if carnivorous fish don't find themselves short of prey, human fishers likely will, Baudron added. Fisheries managers may need to account for reductions in fish size, and potentially drops in abundance, as they manage their stocks. But if climate change is responsible for our dwindling ocean resources, fishing policies alone probably won't solve the problem.

"If the sea's warmer, the fish are getting smaller," said Baudron. "There's not much you can do to prevent that, unless you reduce emissions."

Researchers Study Violinists To Learn How Humans Act in Synchrony
Alligators May Be Able to Survive Venomous Snake Bites
New Theory Says We’ve Been Wrong About How Bubbles Pop
Crustacean Genes May Solve Debate Over How Insects Evolved to Fly
Some Beetles Survive Being Eaten, New Study Finds
END_OF_DOCUMENT_TOKEN_TO_BE_REPLACED

COVID-19 Vaccine, Sharks and Mezcal
Crabs Use Belly Sounds To Communicate
Touring The Trinity Test Site
Protests, A Retracted Paper, and a Super-Earth Planet
Why Is an Empty Shampoo Bottle So Easy To Knock Over?
END_OF_DOCUMENT_TOKEN_TO_BE_REPLACED