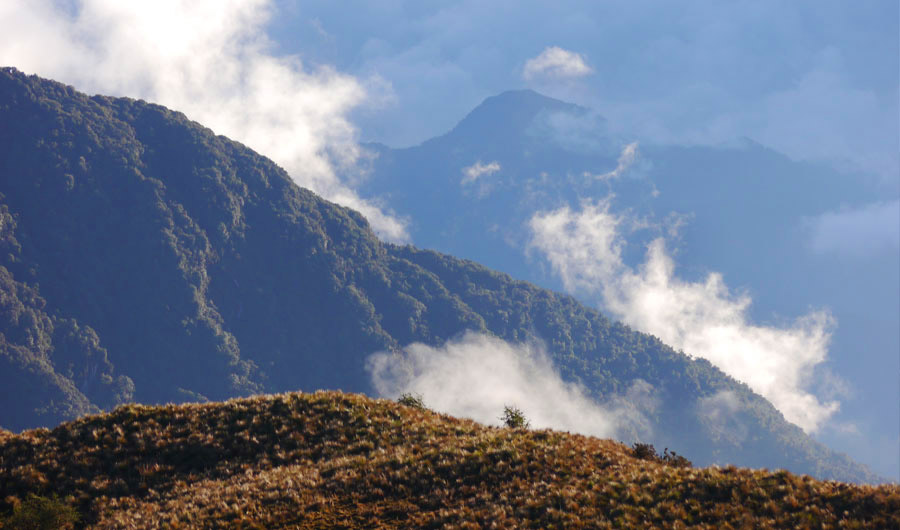 (Inside Science) -- The heat-trapping gases humans release into the air are warming the planet. But humble soil-dwelling bacteria and fungi also release heat-trapping gases, and those gases could determine just how hot it gets. Now new research adds to the worry that the microbes will make climate change worse.

Soil microbes digest dead plants and animals. And, like us, they "breathe out" carbon dioxide. Some scientists predict that as temperatures rise, bacteria and fungi will speed up their metabolisms, spewing vast stores of carbon from the soil into the atmosphere. Others think heat could slow soil microbes down, heading off this potential carbon burp.

A team of scientists has now taken an important step toward lowering the uncertainty about the microbes' likely response. The researchers conducted the first tropical soil carbon warming experiment by carting tubes of soil up and down a mountainside and measuring how the soil’s carbon content changed. The research suggests a huge carbon bomb may be waiting to explode, the team said, possibly boosting carbon dioxide in the atmosphere by almost 10% over a century -- an amount that would have severe impacts on life on the planet.

“This experiment adds to our insight as to what could go on in future,” said Jerry Melillo, a biogeochemist at the Marine Biological Laboratory in Woods Hole, Massachusetts, who was not involved in the study. “It’s definitely an important contribution.”

Melillo launched one of the earliest soil warming experiments in 1991, using buried electrical cables to heat soil by 5 degrees Celsius in a Massachusetts forest. He sought to determine whether underground microbes digest dead animals and plants faster when things get hot. Dozens more experiments have since come online. A 2016 analysis of 49 of these experiments estimated that warming soils globally could belch a whopping 55 billion metric tons of carbon by 2050 -- about as much as the expected human-caused emissions from the U.S. over that period.

But all soil warming experiments to date have been done in the temperate and boreal zones, which are cold much of the year. The tropics, where about a third of Earth’s soil carbon resides, are already warm year-round. Some scientists have hypothesized that warming tropical soils might release little additional carbon because microbes' digestive enzymes may function sluggishly at hotter temperatures; others believe tropical microbes will respond similarly to their boreal and temperate counterparts.

Without experimental data, computer simulations come to wildly different conclusions about how much carbon tropical soil microbes will release. Differences in such estimates for this century vary by a greater amount than the total carbon emitted by humans to date, making it hard for bodies like the Intergovernmental Panel on Climate Change, or IPCC, to pin down how much warming to expect. Data from tropical soils, said Melillo, “is absolutely critical.”

To fill this gap, Andrew Nottingham, an ecologist at the University of Edinburgh in the United Kingdom, devised a way to warm soils without expensive, complicated underground infrastructure. In 2010, he and his research team extracted 50-centimeter-long, 10-centimeter-wide cylinders of soil from different heights on a heavily forested mountainside in Peru’s Manu National Park. The environments ranged from steamy Amazon rainforest 200 meters above sea level to high-elevation cloud forest 3,000 meters up the slope. They carted the high-elevation ones down to the bottom (and vice versa) and reburied them. The journeys involved hours of hiking, long bus rides and even a canoe trip down a river.

The approach allowed the researchers to hit the highest-elevation soils with temperatures 15 degrees Celsius (27 degrees Fahrenheit) warmer, on average, than they would normally see.

The researchers also installed filters and funnels to ensure each soil core received the same average rainfall it would have had it not been moved.

Five years later, the research team measured the carbon in each soil core and compared it to the amounts in soils that had not been moved. They also studied variables such as the makeup of bacterial and fungal communities and the activity of the microbial enzymes.

They found that for each 1 degree C (1.8 degrees F) uptick in temperature, soil carbon declined by 4%. They also found evidence that the microbes in the warmed soils produced enzymes that allowed them to decompose plant and animal remains more efficiently. If this pattern holds for soils throughout the tropics, which span much of Latin America, Africa and Asia, atmospheric carbon dioxide could balloon over this century by an additional 9% above what humans and other sources will emit, Nottingham said. Though studies in other sites are needed to verify this prediction, the result suggests tropical soils will see “a very large loss of carbon,” he said. “It’s larger than we expected.”

Nottingham noted that his experiment had limitations: He and his colleagues did not transport plants growing atop their soil cores, which could affect how much carbon microbes have to feast on. And they did not attempt to mimic non-temperature-related conditions of the future.

They also could not heat soils beyond the average temperature of the low-lying forest, about 26 degrees C (79 degrees F). To see how tropical soils might respond to the even higher temperatures expected as the climate warms, Nottingham has installed electrical coils that are heating rainforest soil at a Smithsonian Tropical Research Institute site in Panama. (A separate warming experiment is underway in Puerto Rico, though it was knocked offline for a year by 2017’s Hurricane Maria.)

Kathe Todd-Brown, a soil ecologist at the University of Florida in Gainesville who co-authored the 2016 analysis, praised the researchers for devising a way to produce a big soil carbon change in a short time.

In one sense, she said, the result is “reassuring”: it suggests that climate models that assume tropical soils will behave similarly to temperate and boreal ones -- including many of those used by the IPCC -- do not need to be rewritten.

But the study’s implications for future climate change, said Todd-Brown, are not reassuring.

“Soils will not save us.”

There is hope, however, that with smart management, soil microbes could at least help us. Some scientists believe practices such as reforestation and no-till farming could help restore tropical soils and cause them to sequester carbon instead of release it.

Beyond carbon storage, soil microbes are also critical to biodiversity and forest health, added Norma Salinas, an ecologist at Pontifical Catholic University of Peru in Lima and a member of the research team. “People say the microbiome is important for your health,” she said. “For the ecosystem, it is the same -- if you see very healthy soils, you can see a very good ecosystem.”

The work is published on "early view" in Ecology Letters.

Editor's Note: This story was updated on Oct. 1, 2019 to include additional information about the location of the soil warming experiment in Panama.