What Ancient Rock Art Reveals About A Wetter Arabia 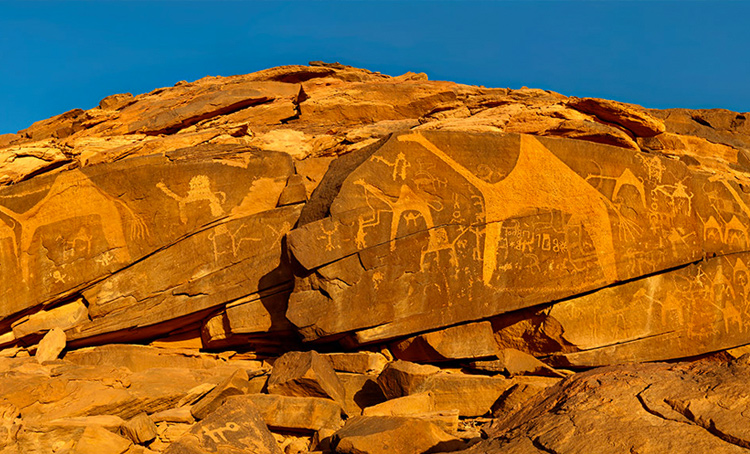 Petroglyphs of camels and other animals are carved into sandstone rock in northwestern Saudi Arabia.

(Inside Science) -- Today, much of the Arabian Peninsula is sandy, dry and desolate. But in recent decades, some scientists have been collecting evidence revealing past periods of warm, wetter weather that periodically "greened" swaths of the peninsula, creating savanna-like environments similar to East Africa's.

The last phase of humid weather is thought to have occurred between roughly 11,000 and 6,000 years ago before arid conditions returned and the desert advanced once more. Now, new research on animal images depicted in rock art from prehistoric humans in northwest Saudi Arabia is shedding light on the animals and people that once roamed the region and how they may have been affected by those changes in climate.

The research reveals that lions, leopards, hyenas and cheetahs simultaneously thrived in the area during the last period of wetter weather. That "wealth of carnivores" suggests that copious amounts of prey and a "mosaic" of different habitats flourished too, said Maria Guagnin, an archaeologist at the University of Oxford in England and the study's lead author.

"There is a lot of environmental and biological information captured in the images," she said. The rock art depicts "the way the engravers saw their environment and captured [it] for us to look at millennia later."

Previously, some scientists have suggested that savanna animals may have moved into the region when the climate was more humid. But no animal bones have been unearthed to lend support to the idea. That's in part because preservation of the remains tends to be poor in the current desert environment and because archaeological interest in the pre-Islamic period of the region is somewhat new, and few excavations have taken place.

So the researchers turned to the petroglyphs (carved images, as opposed to pictographs, which are painted onto rock), which decorate the sandstone at a place called Shuwaymis, near the northwestern city of Hail. There, rocky outcrops rise above the harsh landscape on either side of a dry waterway.

Although Bedouin nomads have likely known of the images, which are thought to be some of the oldest engravings in Arabia, for centuries, it wasn't until 2001 that the Saudi government was alerted to the rock art's existence. In 2015, the site and another outside the nearby oasis of Jubbah were named Unesco World Heritage sites, bringing global recognition of the sites' historical value. More than 1,500 rock art and inscription sites are documented throughout the country, according to Saudi tourism officials.

In 2013, researchers with the Paleodeserts Project, a collaboration between the University of Oxford and the Saudi Commission for Tourism and National Heritage, mapped a portion of the art including 254 panels with images of animals. 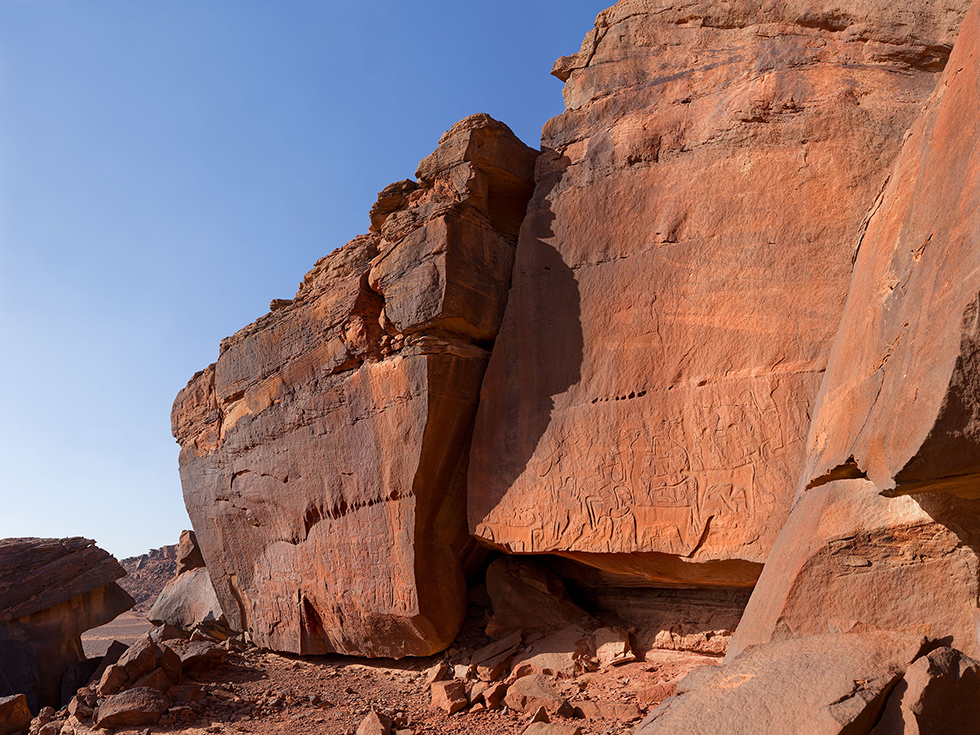 In the new study, published in May in the journal The Holocene, the researchers analyzed the animal engravings, identifying about 1,500 animals from 16 species. Rock art is notoriously hard to date, but they were able to divide most of the images into two broad groups: an early period that coincided with the wetter environment and a later period from after the return of the desert. (Their chronology largely matches the timetable proposed in 2007 by archaeologist Majeed Khan, one of the first people to study the art.)

They found that the early engraving period contains a wide range of wild animals including cheetah, leopard, hyena, Arabian wolf, gazelle, lion, ibex and a type of wild ass known as an onager. Domesticated animals like hunting dogs and cattle show up, too, and hint at the transition among humans from hunter-gathers to herders.

In the later phase, however, the depiction of wild animals largely ceases. The images of cattle disappear too, suggesting that the pastures had all dried up. Instead, the art is filled with desert-adapted domestic animals such as camels, horses and donkeys.

Still, the researchers were surprised to observe only 16 species in the art, all of which can survive in relatively arid conditions. In similar work done by Guagnin in the Sahara Desert, a wider range of other savanna animals such as hippos and crocodiles tends to show up in the art when the climate there was wetter.

But, they argue, for lions, leopards and cheetahs to have lived in the same environment at the same time, there would have had to have been substantial amounts of prey such as gazelles and onagers, and plenty of food for those animals to eat, too. Using biomass estimates, they conclude that a typical pride of lions would have required nearly 84,000 pounds of prey or roughly 166 onagers to be present in the area at all times so that the lions could kill individual onagers without causing the entire population to decline. A single leopard would have needed roughly 72 mountain gazelles.

What's more, the simultaneous presence of the carnivores implies a medley of habitats too, from thicker vegetation around ephemeral waterways, also called wadis, to more open vegetation in the surrounding landscape. That's because the animals hunt prey of different sizes and from different habitats, said Guagnin.

And the carnivores themselves require various environments. For example, leopards can survive in dry landscapes, she said, "but if they have competition from lions and cheetah, then they really need trees where they can hide their prey. Otherwise, the larger predators would steal it from them. So, we know there must have been more forested habitat along the wadi courses where the leopard was able to hunt and live."

The researchers' climate models suggest that during the humid phase that ended about 6,000 years ago, Shuwaymis was located near the northern edge of the wet area and, thanks to rain from the African summer monsoons, may have had ecological corridors that linked to habitats in the southwest of the peninsula.

"The real beauty of this paper is the way they've interwoven an understanding of the biology of these animals with climate modeling and with the actual documentation of the rock art," said Sandra Olsen, an archaeologist at the Biodiversity Institute and Natural History Museum at the University of Kansas, who wasn't involved in the research. "It's nice to bring all of those pieces of the puzzle together."

Still, "I would love to see animal bones from sites around there," said Olsen, who has also studied the rock art at Shuwaymis and other locations in Saudi Arabia. But until more excavations take place, "the rock art is the best source we have for what kinds of animals lived there in the past. There's a lot of work to be done in the future."

For now, Guagnin and her colleagues plan to keep squeezing as much information as they can out of the stones at Shuwaymis and other rock art sites in Saudi Arabia, including potential insights into the artists who left their mark on the rock.

For example, on one of her favorite panels, two hunters seem to be pursuing a wild ass along with 22 dogs. Rather than a generic dog figure carved over and over, each dog looks different, with distinctive ears, tails, chests or stances. "You can really tell that [the artists] knew each of these dogs. ... You can connect to the engravers in a way, and that's very nice," she said.