Vertical pupils and massive bodies might look cool on TV, but could handicap a dragon in the real world.
Image 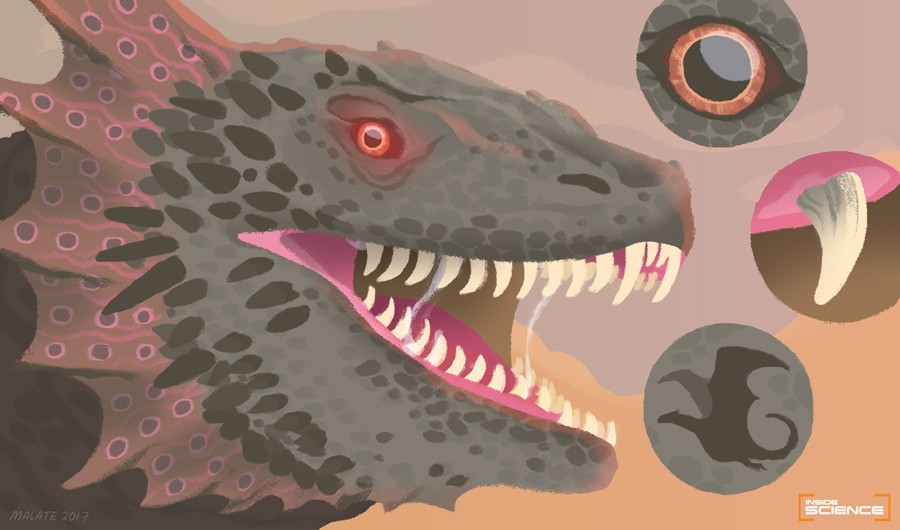 (Inside Science) -- Last week's "Game of Thrones" episode ended with a chilling image: massive, gnarled eyelids sliding open, revealing a dragon's slit-pupiled gaze. But if dragons were real, their pupils would probably be round, not slitted, according to vision scientist Martin Banks at the University of California, Berkeley. Inside Science spoke with Banks and several other biologists about how dragons' bodies might actually work, combining their insights into a science-inspired vision of dragonhood. 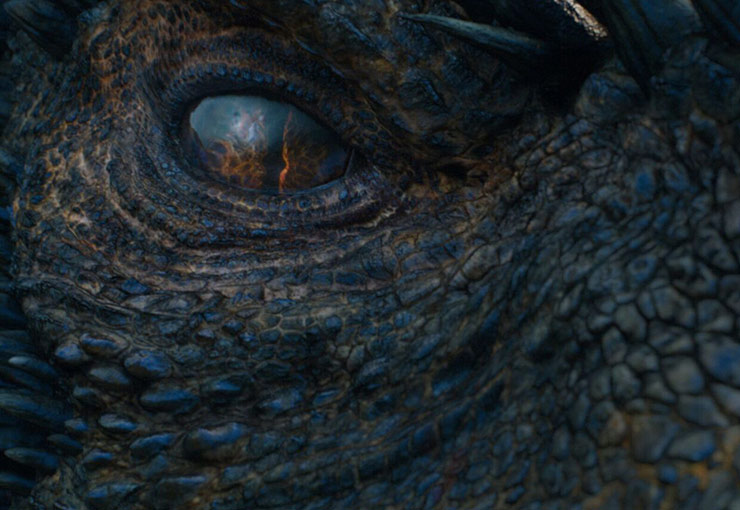 When designing dragons for a human audience, it makes sense to give them catlike pupils, since we see such eyes as dangerously alien, said Banks. But for a real dragon, those pupils would come at the cost of crisp vision over long distances.

Here on Earth, almost every creature with vertical pupils is an ambush predator -- something that hides low to the ground and waits for prey to come close. These animals must judge distances precisely in order to strike prey with one sudden lunge.

Many animals calculate distance by moving their heads, using the fact that nearby objects will travel further across their field of view. But movement could give away an ambush predator's location, said Banks. Instead, such animals rely on overlapping images seen through two vertical slits, which have unique optical properties that aid in depth perception.

This works well at short range, allowing cats to see nearby objects when crouched low in the grass. But with vertical pupils, horizontal contours soon become blurry as distances increase. Tall animals hardly ever have vertical pupils, probably because their high vantage means they also need to see more distant objects, said Banks.

Thus, foxes and house cats have vertical pupils, but lions and wolves have round ones, as do nearly all birds. We've given our dragon round pupils for keen eagle's-eye vision.

The fearsome rows of teeth on the "Game of Thrones" dragons may have been inspired by a wide range of creatures from snakes to dinosaurs, and there could be various reasons for their shape and arrangement, according to Paul Gignac, a vertebrate paleontologist at Oklahoma State University in Tulsa. Still, he noted, the teeth's straight, peglike shapes might be less than ideal for a dragon lifestyle.

Such teeth are typical of fish-eating reptiles that trap their prey in a toothy cage, said Gignac. In contrast, the "Game of Thrones" dragons apparently eat large land animals, and one memorable scene from season five shows them yanking off chunks of a man's flesh. This feeding style, which Gignac calls "puncture-and-pull," is used by animals like komodo dragons, which tend to have backward-curving teeth. We've copied these teeth on our dragon above, granting it a firm grip in case it needs to tear someone limb from limb. 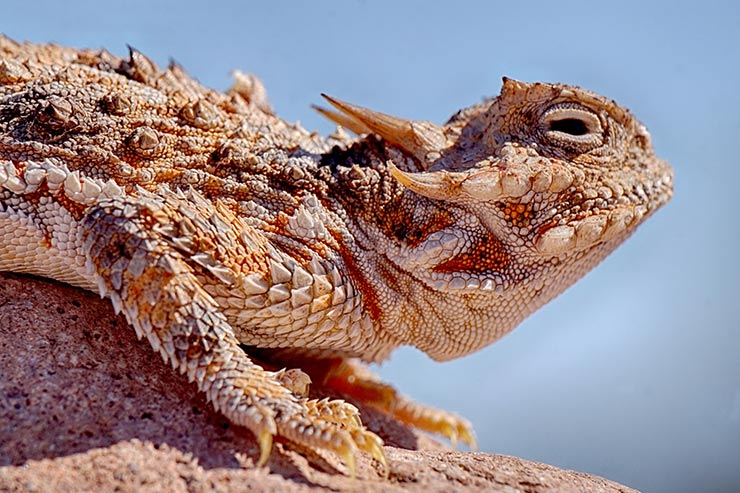 In the HBO series, dragons' heads are crowned with an impressive-looking mass of horns. But it's not clear what purpose the horns would serve, said Kevin Young, an ecologist with Sul Ross State University in Del Rio, Texas.

The lizards' horns appear to form effective shields over their short necks. But dragons have long, serpentine necks, and their horns would only protect the section right behind the head. Moreover, it's hard to imagine full-grown dragons needing to defend themselves against predators.

The dragons could potentially use their horns to fight each other, perhaps in competition for mates. But when animals like deer and antelope battle for mates, they clash head-on, using horns that extend upward rather than straight back.

Perhaps, said Young, the horns serve no practical purpose at all, functioning instead as ornaments to attract the opposite sex. Such ornaments don't always have to aid survival to exist in nature -- witness the peacock's tail, an awkward, gaudy extravagance that makes it harder to flee predators.

We've given our dragon a colorful frill, inspired by various species that use beauty for seduction. But the ornament idea is highly speculative, since the sex lives of dragons -- unlike those of the show's human characters -- remain mysterious. 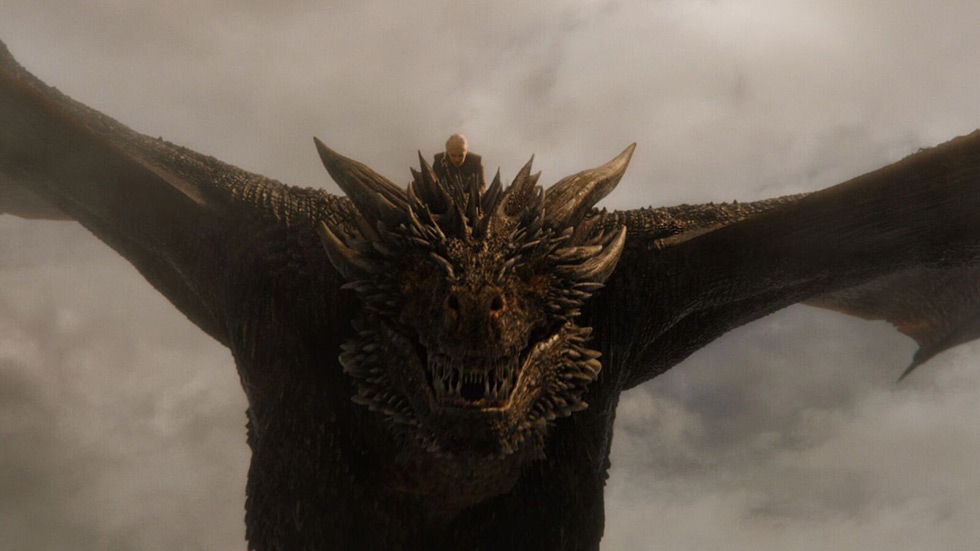 In their full-grown glory, the "Game of Thrones" dragons would, sadly, be too heavy to fly, according to Mike Habib, a biomechanist at the University of Southern California in Los Angeles. Habib studies flight in pterosaurs, extinct reptiles with wingspans of up to 36 feet and bodies that could weigh as much as 550 pounds. That's probably about as big as any real flying animal could get, which makes this season's Boeing 747-sized dragons out of the question, said Habib.

Even if size weren't a problem, the dragons would still have trouble in the air. Their tails would tend to sink, and their noses would tip up, said Habib.

In order to fly straight, the dragons would need their center of mass to be farther forward, close to the leading edge of their wings. That would mean a shorter back, a shorter tail and perhaps smaller hind legs, as we have shown in silhouette above. Of course, the more you shrink the hindquarters, the less it looks like a dragon -- probably not a price many fans would be willing to pay.

Despite these issues, Habib said the "Game of Thrones" dragons look more plausible than many other dragon depictions he's seen. While traditional dragons are often gangly and thin, HBO's dragons are robust, displaying some of the muscle they would need to power flight. More importantly, they have only four limbs, the front pair serving as both wings and forelegs. In traditional dragons, the wings often form a separate pair of limbs on top of the forelegs -- a ludicrous design that leaves no room for wing muscles, he said.

"I can tell from the 'Game of Thrones' dragons that the creators there actually thought about what the inside of the animal would have to look like," said Habib. "That makes for a much more realistic animal."