The solution flowing through the Keystone pipeline isn't just crude oil. Scientists are now learning what that means for spills.
Image 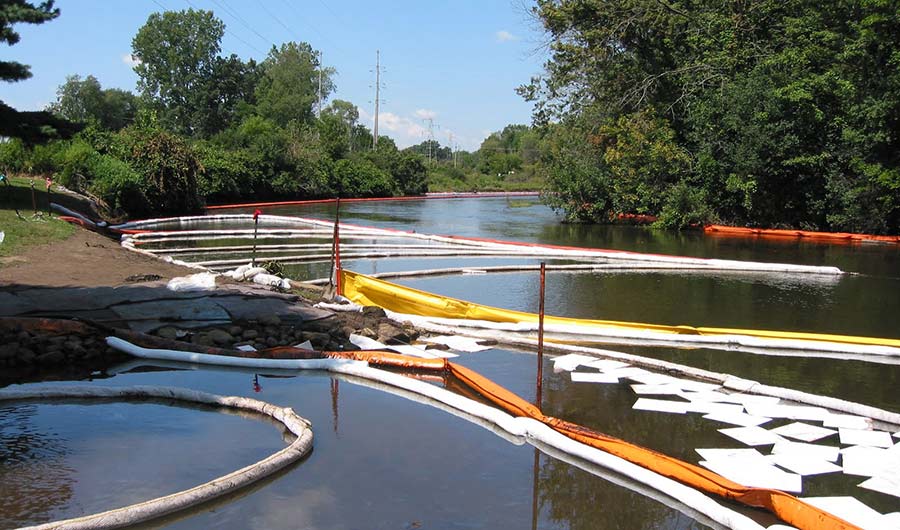 (Inside Science) -- In June next year, a remote lake in Canada will suffer eight simultaneous oil spills. But it will be for a good cause. Scientists are trying to learn how dilbit, or diluted bitumen -- the complex mixture of bitumen, gasoline and other chemicals that flows through pipelines and is hauled on railway cars away from Canada's oil sands -- behaves when it is released into the environment.

Researchers at the International Institute for Sustainable Development's Experimental Lakes Area in northwestern Ontario will study the fate and behavior of dilbit in freshwater and how best to clean it up when a spill does happen.

The oil sands have been producing bitumen for decades and major pipeline projects like Keystone XL are planned to help transport the material and increase production. However, surprisingly little is known about how bitumen, especially in its diluted form, acts during a spill, and how it affects the environment.

“This is still an area with a lot of low-hanging fruit,” said Greg Pyle, an aquatic toxicologist at the University of Lethbridge in Alberta. Even basic questions such as whether the dilbit will sink or float remain largely unanswered. There just hasn't been much funding available from either governments or oil companies to do this kind of work, he said. That is starting to change, as pipeline approvals now often require the inclusion of funds to support this kind of research.

Most of what we know about oil spills comes from studying crude oil spilled in the oceans, but spills in fresh water are very different. Fresh water is not as dense, so material can sink faster, and the creatures living there are not used to encountering oil.

“In the Gulf of Mexico there are around 600 natural oil seeps, so the microbial community may be primed to deal with oil,” said Vince Palace, head research scientist at the Experimental Lakes Area. Freshwater microbes may not be as well prepared.

And there have already been several big dilbit spills, such as the one from the Keystone pipeline in South Dakota that released 200,000 gallons of oil in November of this year, or the catastrophic 2010 spill in Michigan, which released up to 1 million gallons into Talmadge Creek and the Kalamazoo River.

“The Kalamazoo spill really opened our eyes to how much we don't know about dilbit, and how different is it to crude oil,” said Diane Orihel, an aquatic toxicologist at Queen's University in Kingston, Ontario.

When the bitumen comes out of the ground it, is practically a solid, and it must be diluted before it can be sent through a pipeline. So the oil companies add a variety of chemicals, such as gasoline, naphtha and others, to reduce the viscosity. In a spill, those lighter compounds evaporate and the dense, solid bitumen remains. A spokesperson for the US Environmental Protection Agency said EPA researchers have found that unlike conventional oil, which tends to float on the surface, dilbit often sinks to the sediment, especially if the weather is cold, if it's in low-density freshwater, or if it picks up dirt and debris on shore before entering the water. In the Kalamazoo spill, the bitumen sank and essentially paved the bottom of the river, which then had to be dredged up.

But we still know very little about what happens to dilbit and to the ecosystem after a spill. And the aftermath of a major spill isn't the ideal time or place to find out. “After a spill it's a frenzy, and there's very little data collected,” said Palace. So Orihel and her colleagues are using the natural laboratory of the lakes to study it in less hectic atmosphere.

The researchers will place eight 10-meter-wide floating rings in the lake with walls that go down to the bottom, creating a set of giant test tubes. They will add varying amounts of dilbit to each, and observe what happens to the oil and the aquatic communities over the following months. “We expect that by fall all the bitumen will be in the sediments,” said Orihel.

They will then remove the test tubes -- and any floating oil that remains -- but leave the rest on the bottom, so that they can track how it affects the community of fish, bugs and amphibians that live there over the course of many years.

This is one of the most pressing questions that needs to be answered, said Pyle, who is not involved in the study. “If it sinks and coats the bottom, we have no idea what effect it has on the organisms there. It's a really basic question.”

Researchers know from experiments in the lab that dilbit can have an adverse effect on fish, causing developmental problems like sacs of fluid around the heart or malformed swim bladders, said Barry Madison, an environmental physiologist at Queen's University who is not directly involved in the field study. But the effects depend on when during the fish's life cycle the exposure happens, and what kind of environment it lives in -- a shallow stream, for example, or a deep lake. Those are the kinds of questions that the scheduled field research at the lake might help to answer.

But that work is complicated by the complexity of the dilbit itself. Many of the ingredients are known to be toxic to fish, but researchers don't know which ones might be causing the effects -- or even what all of them are. Each oil company has its own secret blends, which change from season to season and from year to year. These factors alter the physical and chemical properties, making every spill unique.

“It's a challenge just to figure out what's in the dilbit, because it's such a dynamic mixture of chemicals,” said Madison.

A second project, led by Palace, will study the most effective ways of cleaning up spilled dilbit from shorelines. Working in small enclosures on the shore of the lake, Palace will spill dilbit and then try different ways of cleaning it up to see which works best.

While a spill in water is relatively easy to control using skimmers and floating booms if it is caught early before the bitumen sinks, on shore it can be more difficult, as the cleanup efforts can degrade the shoreline and do almost as much damage as the spill itself, he said. In a marsh, for example, where the ecosystem is extremely sensitive to the physical disturbance that a cleanup would bring, it might be best to leave it alone. “We don't know how resilient aquatic systems are, or even what defines a resilient community,” said Palace.

Palace will test a variety of cleanup methods including low-pressure washing, various absorbent materials, and providing extra nutrients to support any oil-devouring microbes that might be there. “Our goal isn't to develop a product, but a sort of manual that says, for certain situations and shoreline types, what's the best approach to recover the most oil,” said Palace.

With oil sands production on the rise, it's important to get a better understanding of how that oil can affect the environment when something goes wrong, said Orihel. “To plan the best response, we need to know what the effects are,” she said. With luck, the work at the Experimental Lakes Area will mean that cleanup crews are better prepared for the next major pipeline leak.