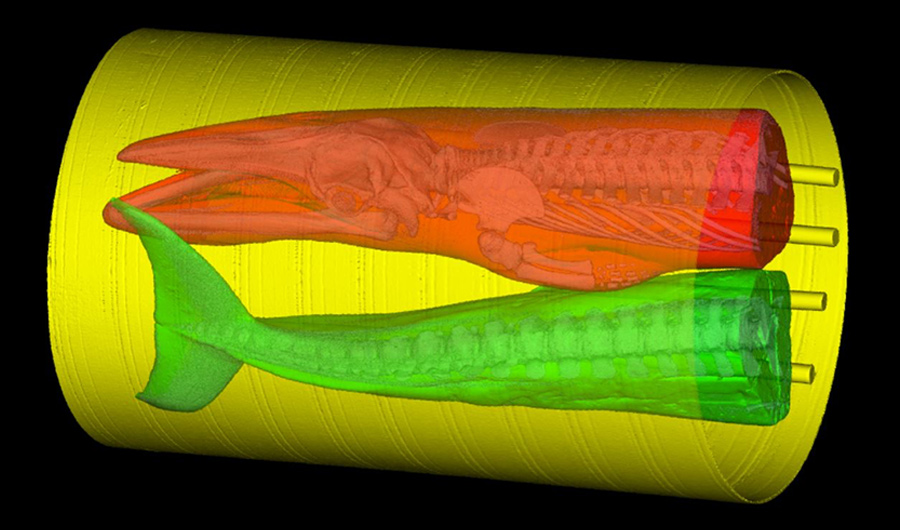 (Inside Science) -- Scientists that want to know more about how whales hear can’t just go out and give a hearing test to a wild, 30-foot-long animal. Now, researchers are using an interesting fix -- they loaded an entire, 11-foot-long, frozen whale calf into a giant scanner designed for rockets. And what they’re finding might help us understand how these animals live.

“When you live in water, sound is the most valuable sensory system you have,” said Ted Cranford, a whale biologist at San Diego State University and one of the scientists. “Light does not travel through water very well. Sound on the other hand, travels very well.”

Whales use that sound to find their way, track down their food, avoid predators, and even communicate with each other. But there are still many things we don’t fully understand about how whales actually hear, like how they detect the superlow frequency, long-wavelength calls they can use to communicate.

Instead, Cranford and his team turned to rocket science for the answer. They obtained the frozen remains of an 11-foot-long minke whale calf that had become beached in Maryland, then put the specimen in a giant CT scanner used to scan rocket engines at an Air Force base in Utah.

CT scans (also called CAT scans) might seem more at home in hospital settings as a diagnostic tool. But it is actually fairly common to use CT scanning on machines like rockets, said Ben Connors, a manager at North Star Imaging, a company in Rogers, Minnesota, that builds CT scanners. They weren’t involved in Cranford’s research, but are familiar with how aerospace and other industries use scanners.

“We use X-ray and CT for many, many different purposes,” said Connors. They can scan a material in order to build a computer model of it, for instance, or look for manufacturing defects. “The main activity is to keep planes or medical devices or other critical components safe.”

In Cranford’s case, they used the scanner to build a virtual 3-D model of the whale’s bones, fat, and muscle. By then plugging in how much the different types of tissue jiggle or stretch, they made a model of exactly how a powerful, underwater soundwave might interact with a whale’s head and body. In the end, Cranford’s team was able to replicate a standard hearing test called an audiogram on the minke whale calf. No headphones needed.

It’s worth noting that these results are preliminary, though Cranford’s team has done similar work in the past. Cranford is presenting the results of their minke whale experiment this week in San Diego at the annual Experimental Biology meeting, with plans to officially publish in the near future.

Their initial results do suggest some interesting insights, said Cranford. By scanning the entire whale, not just the head, it gives them a better picture of how whales hear sounds in front of, to the side of, or even behind them. Their results also suggest that minke whales might have evolved special high-frequency hearing, which surprised the scientists.

“We said, 'Why would they need that?'” said Cranford. They think that it might be to detect the voices of their main predator -- the relatively squeaky-voiced orca whale.

This type of work might also prove useful to other researchers who’ve been studying how man-made noise pollution, like ship traffic, affects whales.

“Think about being in the middle of a meadow, where it's really quiet and you can hear birds chirping, versus those same birds chirping, but you're at the airport,” said Regina Asmutis-Silvia, head of Whale and Dolphin Conservation North America, located in Plymouth, Massachusetts. “If you're at the meadow, you could whisper to the person next to you and they could hear you. If you're at the airport, you can't whisper. You have to yell all the time,” said Asmutis-Silvia.

And studies have suggested that the extra stress from all this could affect on the whale’s health or ability to reproduce.

Cranford’s latest work will still need to be reviewed and officially published, but work like this may be one of the many puzzle pieces needed to better understand the life of whales.

Researchers Study Violinists To Learn How Humans Act in Synchrony
Alligators May Be Able to Survive Venomous Snake Bites
New Theory Says We’ve Been Wrong About How Bubbles Pop
Crustacean Genes May Solve Debate Over How Insects Evolved to Fly
Some Beetles Survive Being Eaten, New Study Finds
END_OF_DOCUMENT_TOKEN_TO_BE_REPLACED

COVID-19 Vaccine, Sharks and Mezcal
Crabs Use Belly Sounds To Communicate
Touring The Trinity Test Site
Protests, A Retracted Paper, and a Super-Earth Planet
Why Is an Empty Shampoo Bottle So Easy To Knock Over?
END_OF_DOCUMENT_TOKEN_TO_BE_REPLACED