Study reveals how in distantly related species, smaller birds can win battles with larger ones. 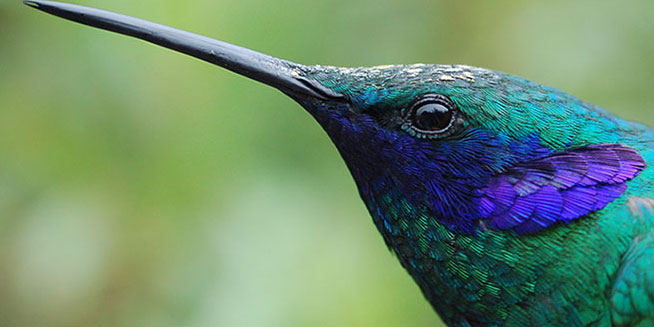 (Inside Science) -- Most of the time, for an individual animal, the bigger you are, the more likely you are to succeed. But sometimes, the little guy prevails -- and scientists are just starting to understand how and when this happens.

"While there has been research on body size and aggressive conflict, no one had looked at why small species can prevail," said Paul Martin, a biologist at Queen's University in Kingston, Ontario.

Martin chose three aggressive kinds of interactions to focus on: vultures gathering over carcasses, hummingbirds fighting over nectar resources, and antbirds aggressively competing with each other over army ant swarms. Each of these three categories included numerous species. For example the smaller black vulture might face off against a larger species like an Andean condor. In all, Martin and his colleague Cameron Ghalambor examined 23,362 aggressive interactions among pairs of individuals from 246 bird species.

They used observational data, tallying the times when one bird attacked, chased or displaced another. They also recorded how closely related the species were, using GenBank, a repository of genetic sequences.

They found that in closely related species, the larger bird won the battle 81.7% of the time. But when the species are more distantly related, the smaller bird won out much more often -- about a third of the time. The research was published last week in the journal PLOS ONE.

The underlying reason? Smaller species are more likely to evolve fresh traits to overcome small size, including talons for vultures, the ability to speedily accelerate in hummingbirds, better maneuverability, or a greater investment in testosterone and muscle mass with which to fight, said Martin.

In addition, larger species may evolve traits that compromise ability to fight. For example, birds that endure long-distance migration have evolved to building stores of fat, which compromises their ability to fight with species that don’t migrate.

And birds that migrate have to adapt to many different ecological zones -- that flexibility may make it harder for them to be in just one zone. Other specialized adaptations, such as the ability to forage in trees, makes species more likely to lose interactions that occur far from trees.

While the researchers were looking specifically at birds in this study, Martin said that small animals of all kinds are capable of beating their larger counterparts.

"We certainly see evidence of it in other groups -- think of watching someone displaced on a park bench by a yellowjacket," he said. "It's the evolution of things like stingers that really change the rules."

In addition, a group of small organisms can work together, using numbers to their advantage -- just think of a swarm of ants at a picnic spot.

Using the vast amounts of molecular data that are currently being generated to address an interesting behavioral issue like this is really exciting, said Walt Koenig, a Senior Scientist at the Cornell Lab of Ornithology in Ithaca, New York, who was not involved in the new work.

"What I think is perhaps most intriguing is the way that the authors combine a large meta-analysis of behavioral data with molecular data mined from the depths of GenBank to test a hypothesis about behavioral interactions within communities through evolutionary time," said Koenig.

He pointed out that combining evolutionary traits and behavior isn't simple.

"First off, it's not easy to infer evolutionary change in behaviors; and second, to the extent that they are inferring changes through time, the approach has some really interesting potential applicability to understanding the evolution of communities."

Martin plans to continue research into why some specific species can beat out bigger bullies, while others cannot.

"We have these ecological rules, but I think it's interesting that these rules break down as species diverge from each other," he said.

Researchers Study Violinists To Learn How Humans Act in Synchrony
Alligators May Be Able to Survive Venomous Snake Bites
New Theory Says We’ve Been Wrong About How Bubbles Pop
Crustacean Genes May Solve Debate Over How Insects Evolved to Fly
Some Beetles Survive Being Eaten, New Study Finds
END_OF_DOCUMENT_TOKEN_TO_BE_REPLACED

COVID-19 Vaccine, Sharks and Mezcal
Crabs Use Belly Sounds To Communicate
Touring The Trinity Test Site
Protests, A Retracted Paper, and a Super-Earth Planet
Why Is an Empty Shampoo Bottle So Easy To Knock Over?
END_OF_DOCUMENT_TOKEN_TO_BE_REPLACED