New research looks at how dust storms and a thin atmosphere may play into alternative energy sources on the Red Planet.
Image 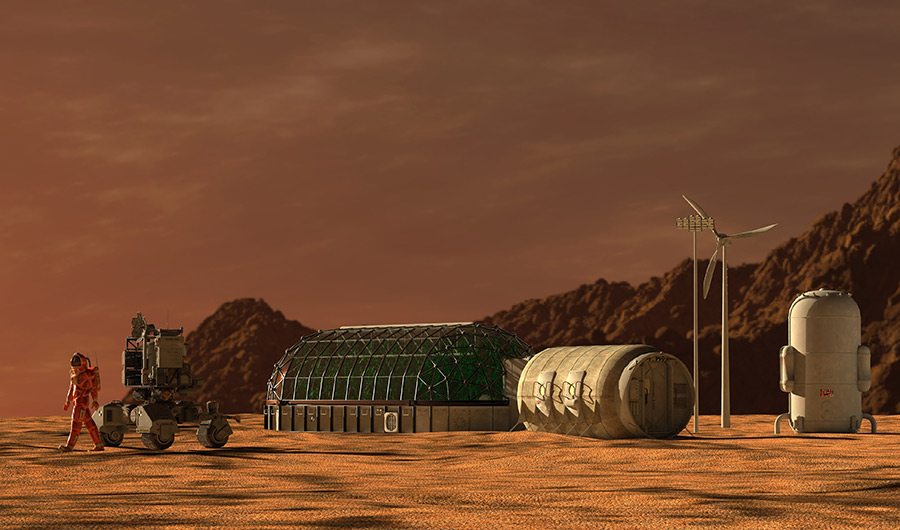 Artist's rendition of a future colony on Mars.

(Inside Science) -- Mars is known for its dust storms, which can cause problems for lander equipment and block out the sun that fuels solar panels. These punishing storms, which can last for weeks, have already caused damage to equipment and even killed NASA’s Opportunity rover. But they could also be dangerous to astronauts on the ground, who would rely on solar power for oxygen, heat, and water cleansing during future missions.

Vera Schorbach, a professor of wind energy at the Hamburg University of Applied Sciences in Germany, was curious to see whether wind turbines could harness the power of these storms, filling in for solar panels on the Red Planet during times of need.

"I asked myself, 'Why don't they have a wind turbine if they have dust storms,'" said Schorbach, the lead author of a study about the potential for wind power on Mars published recently in the journal Acta Astronautica.

She took wind speed and dust storm data collected by the NASA Viking 2 lander, which landed on Mars in 1976. She then conducted a site assessment similar to the way wind energy companies look for suitable areas to build turbines on Earth.

Schorbach was surprised to find that the wind speed wasn't always very high during dust storms. In fact, some of the highest wind speeds occurred on Mars when there wasn't a storm.

Furthermore, since the atmosphere on Mars is so thin, the wind is mostly driven by the sun, and it dies down during the night when it might be most needed to fill in for shortcomings in solar power.

To provide water cleaning, heating, oxygen generation and other necessary services for a crew of five or six astronauts, you would need an average of 80 kilowatts of power. But the thin atmosphere also provides another hitch in wind power possibilities. To provide that much energy on Mars, you would need three turbines with rotor diameters of 50 meters -- a size that isn't feasible.

But the idea is still promising, she said. While the traditional ground-based turbines used on Earth may not work on Mars, some researchers are currently working on plans for airborne wind energy systems that basically behave like kites. And, promisingly, Mars has faster wind speeds at higher elevations.