When Stunning Won't Kill, Fish Use Electricity to Communicate 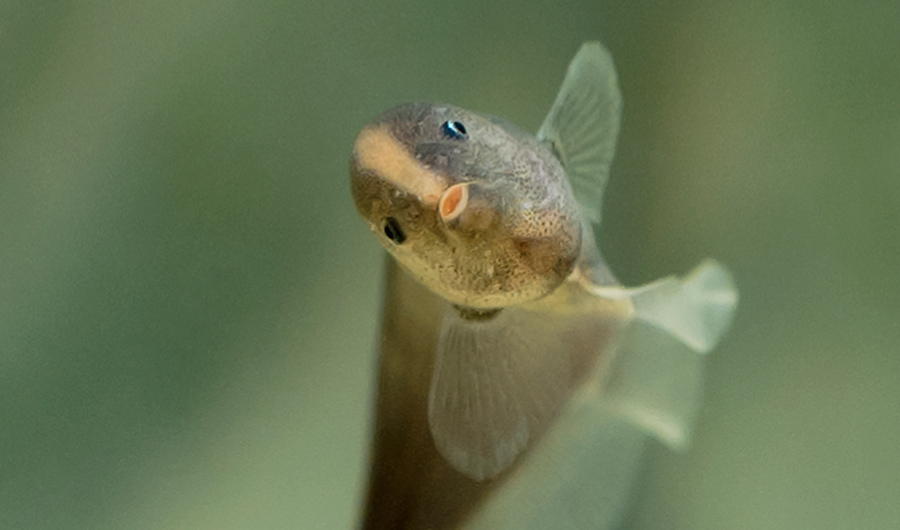 (Inside Science) – Ghost knifefish use electricity as a sixth sense. Now scientists exploring tropical jungle streams have unearthed secrets regarding how these fish use electric signals to communicate in the wild. This work could shed light on how nervous systems in general process weak, ambiguous sensory data, which could help improve the design of bionic devices that interact with the nervous system.

Ghost knifefish generate electricity using a specialized tail organ derived from spinal cord neurons. Unlike their relative the electric eel, these freshwater fish are only weakly electric, not producing enough charge to stun or kill. Instead, these Latin American fish generate electric pulses to communicate with one another and produce electric fields around their bodies to scan their surroundings in the dark.

Scientists have been studying ghost knifefish in laboratories for decades. "A lot of scientists interested in cracking the code of what goes on with sensory signals in the brains of vertebrates work on electric fish," said bioengineer Malcolm MacIver at Northwestern University in Evanston, Illinois. "A lot of brain structures in fish are conserved in mammals because evolution doesn't like coming up with new things, so once you understand them in these weird, amazing fish, you understand a lot about how they work in mammals."

However, "we still know next to nothing about the secret lives of these fish in their natural habitats," said Jan Benda, a neuroethologist at Eberhard Karls University of Tübingen in Germany. To investigate ghost knifefish in their native waters, Benda and his colleagues first drove to the end of the Pan-American Highway in Yaviza, Panama, near the Colombian border. They next took a boat 40 minutes upstream the Chucunaque, the longest river in Panama, and walked 2 kilometers into the jungle to reach their destination, a narrow creek.

Electric fish "are really hard to observe visually," Benda said. "They are nocturnally active and they love to hide between rocks or in root masses."

Instead, to analyze ghost knifefish, study lead author Jörg Henninger, also at Eberhard Karls University of Tübingen, lowered a nearly 4-square-meter grid holding up to 64 electrodes into a stream to detect the fish's electric signals, each 1 millivolt in strength or less.

The scientists focused on the brown ghost knifefish (Apteronotus rostratus). Prior work found that each fish's electric field had a specific frequency, like a fingerprint, and that males possessed higher frequencies than females. From the strength of each fish's signal, the researchers were also able to estimate its position and movements.

Working in the tropical jungle was challenging. For instance, floods from distant thunderstorms could drive water levels up by more than a meter in an hour and turn the stream the scientists worked in "into a torrent of muddy water," Benda recalled. "We lost the whole grid in such an event. It took us three hours to realize that nothing was attached to the wires anymore."

Despite these difficulties, the researchers successfully detected electric interactions between these fish never seen before in the lab. "This is groundbreaking work. It's shed light on a whole electric civilization buzzing around underwater in Central America," said MacIver, who did not take part in this research. "We've known these electric fish have used electric fields to communicate with one another for a long time, but this is the first time a grid of sensors underwater has picked up social interactions in the wild."

For instance, the scientists detected 54 episodes of courtship involving up to 8,400 electric "chirps" emitted per fish per night. These usually involved pairs of males and females buzzing with short chirps until a female gave a long chirp. The male then followed with a doublet of small chirps, and the female ended with a few small chirps herself. This courtship behavior apparently helped the males and females synchronize the release of eggs and sperm into the water.

Many of the electric signals recorded during courtships, spawning and aggression were much weaker or had higher frequencies than expected. The researchers suggested one reason these fish communicated differently in the wild was because of the restricted space in lab tanks.

"Since in these situations the fish cannot escape, they frequently and continuously emit submissive signals," Benda said. "In the wild, aggressive encounters end quickly with one fish leaving the area. Only very few submissive signals are emitted by the retreating fish."

Moreover, lab experiments that are typically limited to a few minutes or hours completely miss this kind of courtship, Benda said. They later detected such behavior in the lab of study co-author Frank Kirschbaum at Humboldt University in Berlin "after three months of continuously recording six fish in a tank," Benda added.

Researchers had previously recorded ghost knifefish signals out in nature, but capturing the signals continuously -- 500 gigabytes of data per day -- required hard drive storage capacity that was not previously available, Benda said.

Further research examining the neural mechanisms the fish use to detect such small signals could shed light on how the knifefish and other animals detect and successfully classify weak, ambiguous signals, Benda said. This knowledge may prove important when designing bionic devices that interact with the nervous system, such as cochlear or retinal implants, Benda added.

Additional investigations could involve even larger grids and longer recordings. "The basic mechanisms of communications in the nervous system are still shrouded in mystery," MacIver said. "These fish provide a really beautiful model that can provide insights into these circuits."

The researchers detailed their findings online May 7 in the Journal of Neuroscience.