Why Hammerhead Sharks Have A Wide Nose

New research rethinks how sharks with elongated head extensions to help them smell in stereo.
Image 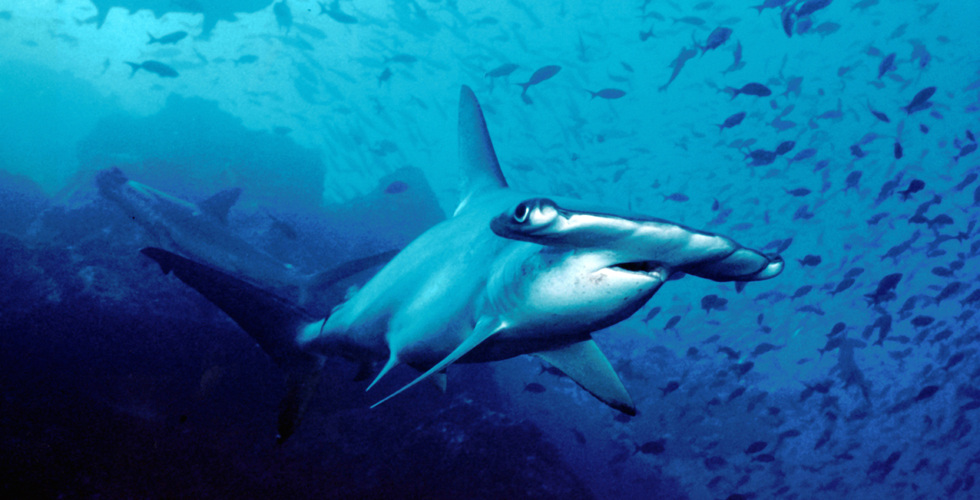 WASHINGTON (ISNS) -- Anyone who stares at a hammerhead will notice its widely-spaced eyes. Far fewer will see that the same is true of its nostrils.

The wide spacing between the nostrils may help broad-nosed sharks track down their prey much quicker than sharks with smaller, pointy-shaped heads, according to new research that reexamines how the animals smell.

"The idea that positioning the nostrils farther apart gives them a better sense of smell has been kicking around for fifty years, but there hasn't been much reasoning behind it," said biologist Jayne Gardiner of the University of South Florida in Tampa, whose study appears in the scientific journal Current Biology.

As a shark swims, water flows into its nostrils, gliding over tiny receptors that detect dissolved proteins, mucous, pheromones and blood -- a plume of materials that washed off its prey.

Hammerheads can detect about one of these scent molecules in 100 billion molecules of water. This level of sensitivity is keener than humans on land can smell, but similar to that of other sharks and fishes -- and not nearly as good as Hollywood would have you believe. The belief inspired by the movie "Jaws" that sharks can smell a drop of blood a mile away is movie myth.

Thirty years ago, research into shark repellents sponsored by the Navy suggested that sharks evaluate scents independently in each nostril, and then swim in the direction of the stronger smell, following a chemical gradient left behind by prey that steadily increases as the shark closes in on its target.

But recent research has shown that turbulent ocean waters break up the chemical trails into patches that scatter like clouds in a windy sky. Each patch is a mess of strong and weak smells, difficult to interpret based on concentration alone and potentially pointing a shark in conflicting directions.

To explore how sharks make the quick decisions to go either left or right in these patches, Gardiner strapped headgear that puffed squid remains into the nostrils of eight smooth Dogfish sharks, a smaller species with a pointy face.

When given two puffs in a row, 0.1 to 0.5 seconds apart, the sharks turned toward the nostril that felt the puff first, even if the second puff of odor was a hundred times as smelly. Two puffs at the same time or very far apart had no effect. Timing, not odor strength, was the key to the sharks' stereo smelling ability.

"It is similar to human hearing," said Jelle Atema, a biologist at Boston University who worked on the project. "Our brains judge the location of a sound by comparing when it is detected by each ear."

What does this mean for hammerheads? The farther apart a shark's nostrils are, the greater the time lag between the two nostrils. This could help the brains of hammerheads more finely discriminate which way to go when moving quickly or swimming into an odor patch at a slight angle.

"The hammerhead might still be able to process that and get a direction from it, where a pointy-nosed shark might see it as a simultaneous hit to both nostrils," said Gardiner.

"Here you have the potential to rethink some of the ideas that have been put forward for the evolution of the hammerhead shape," said Stephen Kajiura, a shark researcher at Florida Atlantic University in Boca Raton who was not involved in the research.

Last year, Kajiura debunked a previous theory that hammerheads have a greater surface area inside of their nostrils. The idea of time delay between widely-spaced nostrils, he said, "is an alternative way of looking at the shape that has never been considered."

But Gardiner said that her research will need to be confirmed by testing hammerhead sharks. No scientific studies to date have shown that hammerheads are actually faster at finding prey -- only anecdotal tales told by fishermen who cast lines in shark-infested waters and notice that the first sharks to show up at a piece of bait tend to have hammer-shaped heads.