Don't bet on all electric cars taking over for more than a decade, researchers indicate.
Image 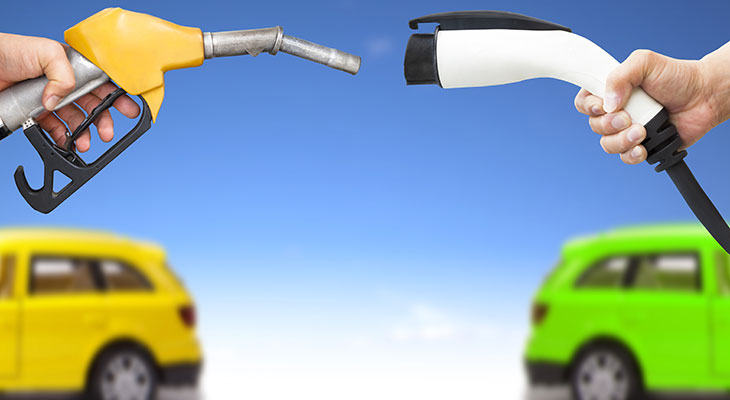 This story follows a story published November 25, 2014 on electric vehicles and how the driving range customers want may differ from what is best for their budgets.

(Inside Science) -- Owning a car provides freedom. Drive hundreds of miles if you want. When you're low on gas, fill up in five minutes. Electric cars don't work that way. Most modern models can travel fewer than 100 miles on a full charge, and gas tanks fill much faster than batteries charge. But one type offers a compromise that combines the benefits of an electric car with the convenience of a combustion-powered vehicle.

"I come to the conclusion that the main competitor of electric cars is the plug-in hybrids because they offer the best of both worlds," said Ricardo Daziano, who studies the way engineering and economics affect the adoption and improvement of new technologies at Cornell University in Ithaca, New York. "So you can go electric on your daily commute and then you feel good about the environment."

Plug-in hybrids, such as the Chevrolet Volt, offer battery power sufficient for commuting. The battery power is often paired with a gas-powered engine that provides either direct propulsion or on-the-go battery charging during long-distance travel. In some cases a plug-in hybrid's gas engine only charges the battery.

Current battery costs keep electric vehicles expensive and limit their range. But, electric cars don't require gas and the vehicles themselves emit no greenhouse gases or other fumes. Of course, gas is relatively cheap right now, with oil at about $70 per barrel. Low gas prices could slow the adoption of new auto technology because the most direct benefit of using battery power to propel a vehicle is probably the money they'll save at the gas pump.

Electric vehicles, in many ways, require a new approach to travel. Drivers can charge at home while they sleep, or at charging stations while at work. They don't need to go to gas stations. But, if they expect to approach the limits of their range, they need to plan their daily trips carefully. They may even purposely choose busy, stop and go traffic instead of free-flowing highways.

"If people were to use some of these more congested areas, they can regenerate some of that battery charge," said Srinivas Peeta, a transportation engineer at Purdue University in West Lafayette, Indiana. "In some sense, what we are saying is that the range can get extended a little."

Hybrids, plug-in hybrids, and electrics typically recapture as much of the car's energy as they can. When the driver applies the brakes, a portion of that energy is sent back into the battery for later use.

While traditional vehicles use extra fuel for heating and cooling the cabin, with an electric, all that energy has to come from the battery, further limiting the range.

Recharging an electric or plug-in hybrid is different than the typical routine of filling up a traditional vehicle. There's not just one pump, like for gas. There are multiple types of charging, ranging from the trickle of a normal household outlet, which takes hours to fill a battery, to fast charging stations such as Tesla's supercharger that add about half a charge to a battery in 30 minutes. It's as if some gas pumps drip into the tank, and some are fire hoses. For electrics or plug-in hybrids, the additional time required to charge the car encourages businesses to offer expanded services at highway rest stops, in order to make it more engaging for people who would have to linger to charge a car's battery.

"You have to come up with compatible services. People wouldn't just wait there or stand there for 20 minutes, right? Because that doesn't make sense," said Eric Huang, a civil engineer at Clemson University in South Carolina, who led a session on electric vehicles and charging at the annual meeting of the professional society INFORMS this fall. He suggested that a company like Starbucks might begin offering outlets to electric vehicle drivers making intercity trips.

"Those fast chargers have to be strategically located along the highway with appropriate services."

Developing the infrastructure to support intercity travel for electric vehicles will take time. There are other types of engines out there, including hydrogen fuel cells and compressed natural gas, but electrical power is generally easier to access. Developing an electric vehicle with both a moderate cost and a more robust range will take some time.

"You look at a car, whether it's electric, or fuel cell, or an internal combustion car, you want it to be affordable and you want it to have adequate driving range," said Cosmin Laslau, a technology researcher at Boston-based Lux Research, a firm that studies emerging technologies. "You can get a very affordable electric vehicle, but it has poor driving range. You can get one with astonishingly good driving range, maybe 300 miles or more, but it is going to be very, very costly. The challenge is to make a car that can drive 300-500 miles for the purchase price of $20,000-25,000. That's not going to happen for another 10 or 15 years."

Some experts think it might take longer. But many agree that in the next couple of decades, plug-in hybrids are going to be an important vehicle option. Why? Consumer demand.

Jonn Axsen, who studies the relationship of human behavior, energy technology and environmental policy at Simon Fraser University in Burnaby, British Columbia, said that one reason people are attracted to plug-in hybrids is because the first 10-30 miles are completely electric. But, he found that relatively few people are interested in all-electric vehicles.

"It seems no matter how I present it, there are far more consumers that are willing to buy a plug-in hybrid rather than a pure electric vehicle," he said.

When drivers commute to work in a plug-in hybrid, it's possible to use gas very rarely.

Currently, these technologies are new to consumers, so experts don't know how people will adapt to these choices. Also, the relative costs of use for electrics and plug-in hybrids are difficult to project into the future.

"There is so much uncertainty," said Axsen. "Because you have to have perfect foresight about what the fuel costs are going to be over the next 15 years. And we have no idea."

"If you're looking at the whole picture, [a plug-in hybrid vehicle] has greater potential at least in the near term," said Zhenhong Lin, a senior researcher at Oak Ridge National Laboratory in Tennessee.

Huang and Peeta, both indicated that electric vehicles will eventually win out. One factor is that by including a gas-powered generator in a plug-in, means that there are two systems of propulsion in the same car.

"Because they have two different power trains and so on, the cost associated with them in the long run is one thing to factor," said Peeta.

Huang called plug-ins a transition model, and suggested that when the batteries and infrastructure are ready, "I think battery vehicles are the way to go."

How far into the future can we expect to observe that transition? As of today, it's unclear.