Will This Be the Week of the Higgs Boson?

Hypothesized nearly 50 years ago, the Higgs particles would permeate space and gives other particles their mass.
Image 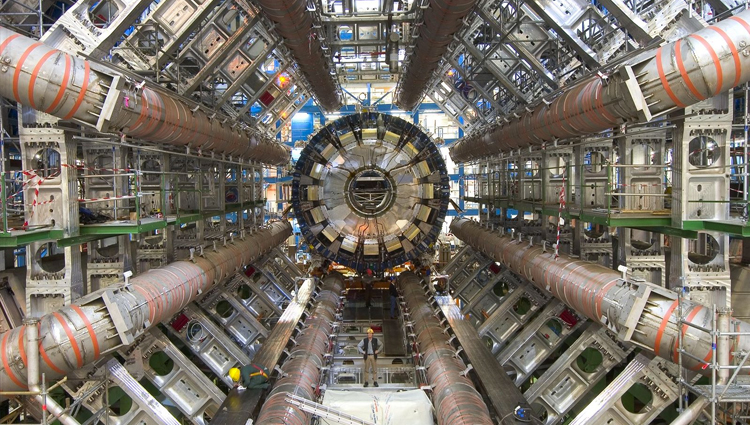 The ATLAS detector at the Large Hadron Collider is one of the main instruments searching for the Higgs boson.

(Inside Science) -- Seemingly as strong as the Northeast US storms that knocked out power for millions over the weekend, rumors are swirling furiously that physicists this week will be announcing evidence supporting the discovery of a long-sought particle called the Higgs boson, or at least something that resembles it. Hypothesized nearly 50 years ago, but not yet definitively detected, the Higgs particles would permeate space and give other particles, such as electrons and quarks, their mass.

However, the Higgs bosons are believed to be very heavy, and it's taken the latest generation of powerful particle accelerators to attempt to effectively nudge the Higgs out of the fabric of space and cause it to then undergo a series of tell-tale particle decays that could then be detected.

On July 4, CERN, the European Organization for Nuclear Research in Geneva, Switzerland, will be holding a seminar at 9 AM Switzerland time (3 AM Eastern US time) in which the CMS and ATLAS experiments at the Large Hadron Collider will individually provide updates on their search for the Higgs. It'll be viewable by clicking this link.

And this morning, at 10 AM Eastern US time (9 AM Central US time), researchers from the Fermi National Accelerator Laboratory in the US will be presenting results of their search for the Higgs. Fermilab's Tevatron has a less energetic particle accelerator but its D-Zero and CDF detectors can study one potential decay path for the Higgs better than the LHC because this decay path in the Tevatron is less overwhelmed by the noise of similar events. You can watch the webcast here. [Editor's note: Link is no longer active.]  (UPDATE: Fermilab press release is here.)

Two things to watch for in the announcements: First, the researchers will describe the statistics of their data. The Higgs would not be discovered in a single event from a particle collision, but instead researchers would build evidence for it after examining data from billions upon billions of collisions. Physicists are looking to accumulate evidence of the Higgs in their data to a standard called 5 sigma, which means that there is a one in three million chance that their data they've collected arose by chance, that it resembles the presence of Higgs particles, but that they're not actually there. Put another way, five sigma means that there is a more than 99.9999 percent chance that they are seeing the presence of newly detected heavy particles in their collisions--presumably, the Higgs. (UPDATE: Sean Carroll has a very nice, more elaborate description of this in his Discover Magazine blog entry from today.)

This brings us to the next thing to watch for: the researchers will likely be talking about discovering a new heavy particle, but they're not sure that it's the Higgs. The Higgs is the last undiscovered particle in the Standard Model, the very powerful theory of particle physics that has held up for decades. After a discovery, physicists will be further studying the new particle to see if it is the Higgs that has been theorized for half a century, if it has any previously unanticipated properties, or if it's something completely new and different, which would suggest brand new physics.

MSNBC has put up a nice update on Higgs boson news here. You can also see our earlier Inside Science News Service article. (UPDATE: Nature reports it has obtained advance information on the Wednesday CERN announcement in their story here.)

It should be an interesting week -- and we'll provide updates throughout!