Your Breathing Zone: The Science of Air Flow in the Spread of Influenza 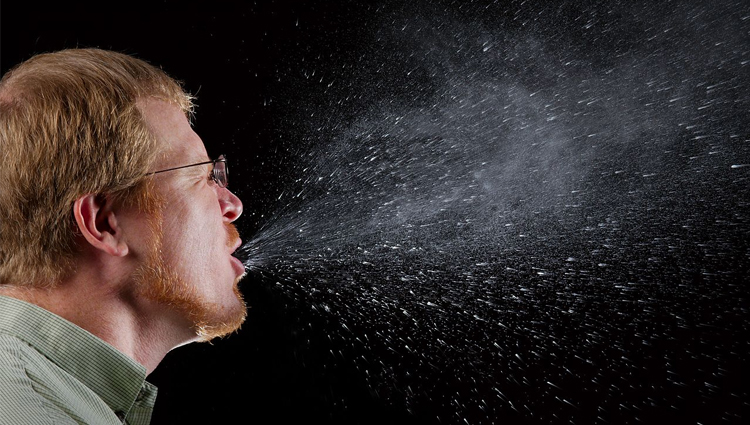 (Inside Science) -- Now that the World Health Organization (WHO) has declared the new strain of influenza to be the cause of a pandemic, the question people will be asking more than ever is: how can we make ourselves safer?

Part of the answer lies in asking how safe the air we breathe is. Most people in the United States spend the majority of their lives indoors -- more than 90 percent of their time according to several studies. We spend more than half our days at home and most of the rest of the time moving between offices, restaurants, stores, buses, cars, subways, and other enclosed environments.

The Centers for Disease Control and Prevention (CDC) recommends avoiding contact with someone who has influenza-like symptoms. This practical public health measure, called "social distancing," is one of the best ways to contain an outbreak of infection. But in any enclosed environment, a sick person can still infect others.

When sick people cough, sneeze, laugh, or talk, they spread thousands of droplets containing as many as hundreds of millions of infectious particles into the air. These droplets can float along until they enter someone else's breathing zone -- the space up to six or eight inches away from the mouth.

"Fluid mechanics is extremely important in the transport of these things," said Syracuse University professor Mark Glauser, associate director of a $40 million dollar research program funded by the Environmental Protection Agency and New York State that looks at the exposure and risks of contaminants in indoor environments.

Many "fluid dynamicists" like Glauser are studying the question of how influenza spreads physically, using the same methods scientists use to study the flow of air over wind turbines or water through a propeller.

Scientists also measure and track these droplets as they move around a room with the air. A person sitting across a table from someone who coughs might inhale hundreds -- or even thousands -- of microscopic droplets, said Shengwei Zhu of Harvard University in Cambridge, MA. A few years ago, he published a computer simulation study of a cough.

Coughing and sneezing aren't the only problem, said Zhu. Many normal activities -- laughing, talking, even just sitting still and quietly breathing -- can increase the risk of infection spreading. A sick person talking quietly for five minutes, for instance, can expel roughly the same number of droplets as a cough.

Many scientists who study fluid dynamics are looking at how air flow and ventilation systems in offices and other indoor environments may play a role in the spread of infections like influenza. They are also asking how changing room air flow through alternative ventilation systems may help -- systems that move fresh air into our breathing zones and draw potentially infected air away.

Most office designs rely on flowing fresh air into rooms from ceiling vents, mixing it with existing room air, and then drawing it out through a return duct, which is also usually in the ceiling. This design is common because it is easy and cheap to develop and install. In building construction, floors are typically made of poured concrete, which makes putting air ducts in them impractical.

New construction favors placing utilities like air ducts, electrical wires, and plumbing pipes in a narrow space between a drywall ceiling and the concrete floor above it. That allows easy access to duct work and enables contractors to install heating and air conditioning systems independently of interior walls and office floor plans.

At Purdue University in West Lafayette, IN, fluid dynamicist Qingyan Chen and his colleagues have a 220-square-foot environmental chamber in which they build various indoor settings to test air flow and find ways to improve air flow patterns in classrooms, restaurants, and office settings.

He has helped develop mathematical equations for engineers to use in designing air handling systems. Every building is different, but the mathematical models try to predict the air flow within the buildings -- depending on the ventilation system designs, the room layout, and other variables.

These guidelines and new designs may be helpful in preparing ways to reduce the spread of airborne diseases in the future. So far, most of the cases of the new strain have been mild, but it has spread to 76 countries and caused nearly 40,000 confirmed cases worldwide -- about half of those in the United States.