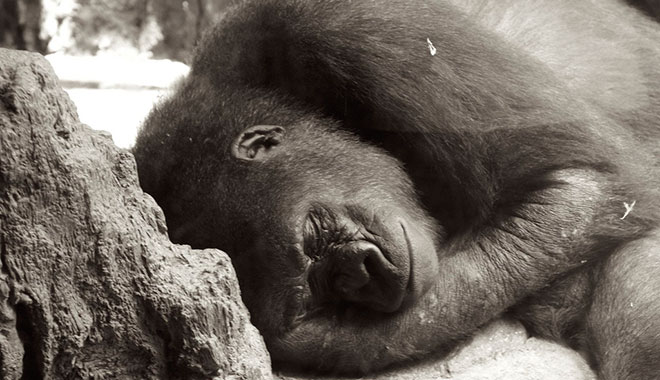 (ISNS) -- The sounds of a gently babbling stream or leaves rustling in the wind can calm city-dwellers far from woodsy retreats. These natural sounds may also influence the behavior of gorillas raised in zoos that have never seen a rainforest.

Western lowland gorillas (Gorilla gorilla gorilla) exhibited fewer stress-related behaviors when a recording of rainforest sounds was played in their enclosure. They responded more strongly to these sounds than to classical or rock music, or no music at all. The results, accepted for publication in the journal Zoo Biology, suggest that the forest melodies were more effective at reducing stress-induced habits such as hair-plucking or regurgitating food in the three gorillas studied.

Previous research on how music affects zoo-housed gorillas produced mixed results. One study found adult gorillas were more agitated and aroused by rainforest sounds. Another paper found that the animals appeared more relaxed in response to music -- whether classical or forest tunes -- than when no music was played to them.

In this new study, researchers Lindsey Robbins and Susan Margulis, of Canisius College in Buffalo, New York, observed the effects of three kinds of music played to three adult gorillas. A mix of compositions from classical composer Frédéric Chopin, four songs from the English rock band Muse, and a "Sounds of the Rainforest" collection were played on hidden speakers housed in the gorillas' enclosure at the Buffalo Zoo. Each selection was played for two hours a day, four times a week over a period of three weeks. The animals received a week-long break of no music at all between each experimental period.

The researchers watched for signs of hair-plucking and regurgitating and re-ingesting food, repetitive behaviors which are often considered signs of stress in captive gorillas. Koga, the only adult male in the group, plucked his hair approximately 8% of the time when no music was played or when he heard the forest sounds. But his frequency of hair-plucking increased to 35-40% of the time when classical or rock music was played.

Although to a smaller extent, all three gorillas also vomited and re-ingested food less often when natural sounds were played to them. Both Koga and Sidney and Lily, two adult females, turned to face the source of the music, a hidden speaker, more often when rainforest sounds were played than in response to other music genres.

Though the music may have simply masked disruptive noises, causing the changed behavior, Margulis suggests that if that were the reason, they would have seen similar responses for all the stimuli. In future studies, she hopes to focus on specific elements such as pitch or pace, rather than different genres of music.

"I don't think it's as simple as classical vs. rock vs. natural sounds," Margulis explains. "It probably has more to do with [differences in] the rhythm or tempo."

Though the researchers only observed three gorillas, the study adds to a growing body of evidence that suggests enriching soundscapes can help the wellbeing of captive animals.

"Compared to 100 rats or 200 college students this is a small study," says Sheree Watson, a primatologist at the University of Southern Mississippi, in Hattiesburg, who was not involved in this work. "It's difficult to get large sample sizes when studying primate behavior. But it's a nicely done study."

Several previous studies have analyzed the effects of human-composed melodies on the behavior of captive animals. Researchers studying dogs housed in a kennel found the canines spent more time sleeping when they were played Beethoven and Bach compositions. Heavy-metal tunes from Motorhead and Judas Priest appeared to increase pups' body shaking, considered a sign of nervousness.

Earlier studies on primates suggested similar influences. Music was correlated with reduced aggression in lab-dwelling chimpanzees, decreased abnormal behaviors in rhesus macaques, and a lower heart rate in baboons. However, few studies so far have found conclusive differences in the effects of different music genres on non-human primates.

Though we often play music to enrich our own homes and workplaces, auditory stimuli are not often used in zoos. A 2010 survey of 60 zoos in 13 countries found that nearly 75% of respondents had never used music to enrich the habitats of captive mammals.

"Auditory enrichment is used very sporadically right now," says Margulis. "But we need to be aware of the impact it might have both on species, and also on individual animals."

Jyoti Madhusoodanan is a science writer based in San Jose, Calif. She tweets at @smjyoti