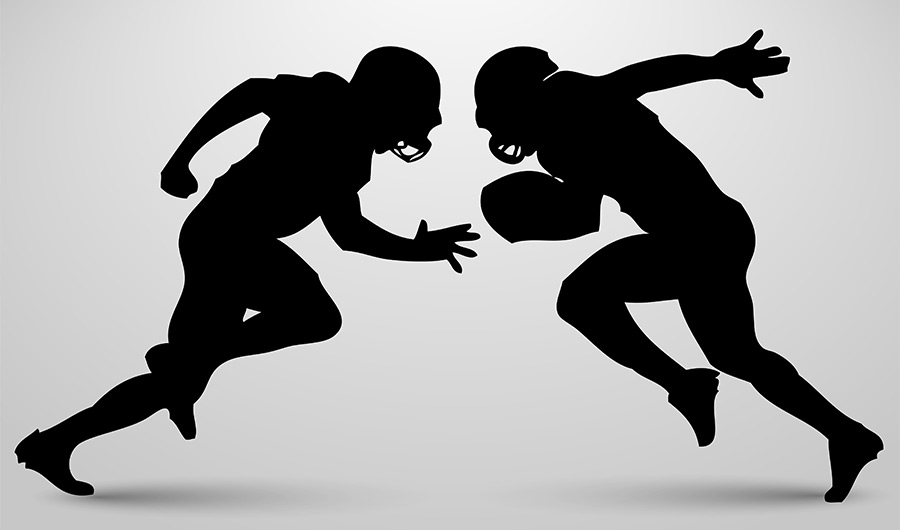 (Inside Science) -- As the NFL regular season enters its fourth week, it's apparent that players are struggling to adjust to new rules aimed at protecting safety, including one that prohibits tacklers from leading with their helmet. Throughout this early part of the season, numerous players and even some officials are still exhibiting signs that they may not yet have a definitive grasp on how exactly these safety-minded rules should be enforced.

Experts say that minimizing the number of hits to the head that players suffer can help reduce injuries, but that changing playing habits formed over years and decades is far from easy.

For example, in week three, Green Bay linebacker Clay Matthews sacked Washington quarterback Alex Smith, began his celebration, and then realized he'd been called for a penalty for roughing the passer. He later said that he believed he had done everything by the book -- he didn't lead with his head or body-slam his opponent. But as Matthews tackled Smith, he landed on top of him. This once-routine type of tackle is another new penalty.

Adding to the confusion is the new rule about hitting with the head, which generally prohibits lowering the head to make contact with another player. The controversy about that rule began with the announcement in the spring and continued through preseason calls, with outrage and confusion hosted on the field and on Twitter. Then, there was a triplet of offenses against Cincinnati in week one, multiple notable penalties against the aforementioned Matthews in multiple games, and several on other players as well.

In short, everyone seems at least a little confused about the rules governing tackling. Some players aren't sure how much they need to change the way they hit other players, especially when they expect to come together at a full sprint.

But experts also praise the injury-reducing intent of the new rules. Stefan Duma, a biomechanical engineer at Virginia Tech in Blacksburg who developed a system designed to rate the effectiveness of football helmets, applauded the reasoning behind the rule against leading with the helmet. "Some people complain that you're taking the physical nature out of the game, but I think really what you're doing is reducing head impacts. I think this is the right strategy."

In the past, he said, anti-targeting rules aimed at reducing violent hits were maligned by many coaches, players and fans. But the players have adjusted, he said. "You don't see the defensive backs, the safeties really coming up and going after people's heads, where you saw that three, four, five years ago more frequently," said Duma. "I think most people would agree that behavior changed pretty quickly."

As coaches and players try to figure out how players should tackle and hit one another under the new guidelines, they encounter new situations and even new dangers. In week three, Miami defensive end William Hayes tore the ACL in his right knee while trying to tackle Oakland quarterback Derek Carr. As Hayes completed the tackle, he moved his right leg to the side to avoid landing with his body weight atop Carr and caught his right foot, and in the process severely injured his knee.

Players make these types of adjustments constantly, often at a sprint. And, it's a game of inches, as the saying goes. The game's speed influences how the brain's decision-making systems work, said David Redish, a neuroscientist at the University of Minnesota in Minneapolis, who studies decision-making in human and nonhuman animals.

In high-speed game situations, "you don't have time to imagine all the possibilities. What you are doing is recognizing a pattern," said Redish. "And what makes somebody an expert is that they learned the sets of patterns to recognize."

Changing the patterns to avoid leading with the head, or to avoid landing hard atop another player, requires new programming -- and lots of practice. When players practice tackling, said Redish, they learn when and how to release "what we call an action chain -- that you've practiced over and over again."

Players and coaches have adjusted quickly to other rule changes in the past, said Duma. If the NFL and its players can do that this season, some of this initial confusion may be worth it if it increases player safety.

"That's one thing I think everyone can agree on: Getting hit fewer times in the head is better," he said.