We all have a pretty good idea how everyday objects should behave. We can predict where tossed balls will land and know we'll find our keys where we left them. Our intuitions are built on years of experience with items made of trillions of atoms. But the first quantum revolution revealed that for individual atoms and other tiny objects, the rules we rely on in our everyday lives break down.

At the Cat and Flask, you can begin tuning your intuition to the world of the incredibly small. The following tale of experimentation, featuring the pub's signature line of quantum refreshments, will introduce some concepts, such as superposition and entanglement, that are key to Quantum 2.0-ville's emerging tech sectors. Cheers!

An Encounter with a Shifty Beverage

As you enter the pub, you see white-gloved waiters ferrying trays filled with bright cocktail glasses. Sometimes straws poke over the rims.

You sit down and ask a waiter for one of those drinks in the colorful glasses. They are spin and tonics, he tells you. They're nonalcoholic, but some newcomers have reported feeling disoriented after ordering one. He explains that the glasses can be blue or pink, as can the straws. You ask for a blue drink with a blue straw.

"I'm sorry, that's not possible," says the waiter. You say a blue glass with a pink straw will do fine, then.

A short while later, the waiter returns with your spin and tonic in a blue glass. You notice a straw poking over the top, and it looks otherworldly -- translucent, with shifting hints of blue and pink. You wonder why the waiter didn't mention this wild straw option. You absentmindedly grab your straw and stir your drink.

You look down at your glass, and it is no longer blue. It has acquired the same translucent shimmer as -- well, actually, now your straw is blue. That's strange. You stir your straw again, but it remains blue. You reach out to pick up your glass again. The moment your fingers touch it, the glass turns blue, and your straw returns to its original translucent shimmer.

What's going on? You clearly need more data. You perform a series of experiments, switching back and forth between touching the glass and the straw. You find the following: 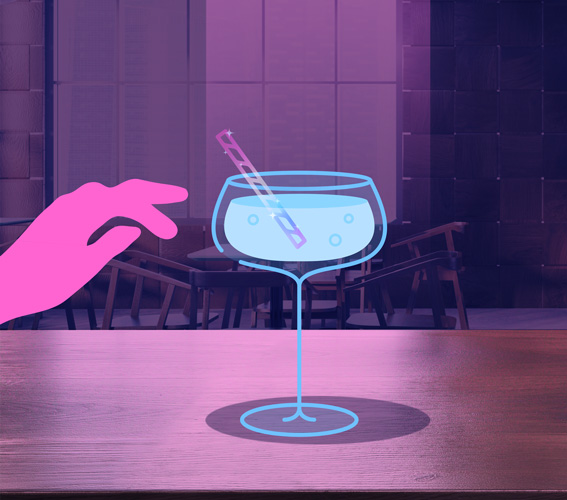 You call the waiter back over. "How is this possible?" you ask. "This glass used to be blue, and now it's pink. And why is it that always either the glass or the straw is translucent?"

"I do apologize," the waiter says. "But Mr. Heisenberg insists that you can't know both the color of your straw and glass at the same time."

You wonder who Mr. Heisenberg is. Maybe he owns the pub? You call a friend who's joined you on the Quantumville trip but is still unpacking at the hotel. "You've gotta come down to The Cat and Flask," you say. "The drinks are fine, but the way they're served … you'll just have to see for yourself."

An Entangled Adventure for Two

Your friend arrives and you hurriedly explain the weirdness with the glass and straw colors. The waiter notices you have a companion and returns to your table. "May I suggest you two try tonight's special?" he asks. "We call it the entangle-tini."

He brings over a pair of drinks that look awfully similar to the one you had earlier, but both drinks come with both translucent glasses and straws. "Sure, we'll take it," you say, and the waiter sets it on the table.

You grab your glass and it turns blue. Your friend's glass instantly turns pink, even though she didn't touch it. These drinks must have a special connection.

"Didn't you say something weird happened when you touched the straws here?" your friend asks, reaching out to touch her straw. It turns pink, and her glass turns translucent, but nothing happens to your glass. Then she touches her glass again and it turns blue. You experiment with switching between touching your own straw and glass. Your drink now behaves the same way it did before your friend arrived, and touching it doesn't affect the color of her drink. You call the waiter.

"These entangle-tini drinks did a special thing when we first touched them, but now they don't do it anymore," you say. "Can we get them back to the connected state?"

Your waiter shows you a button hidden under the table. "Place your drinks next to each other on the table and press this button," he says. "They'll reset to their original entangle-tini state."

You reset the drinks numerous times, and experiment with different sequences of touching your glasses and straws. You notice the following:

Your waiter comes by the table. "How are you enjoying your drinks?" he asks. "They're definitely different," you say. "Is it only the drinks that act this way?"

The waiter smiles. "Oh no," he says. "It's actually everything. But if you stick around, you'll get used to it. And when you tour the town, you'll see we've been putting these strange behaviors to good use."

Subatomic particles such as electrons and photons can actually behave like the quantum drinks you were served. For starters, the particles have what physicists call "complementary properties" that are connected in some way and cannot be simultaneously defined. For your quantum drink, the color of the glass and the color of the straw were complementary. For an electron, properties such as its position and its velocity are complementary. It's not just that complementary properties can't be measured at the same time -- it's that the object doesn't have a definite value for all the properties at the same time.

When a property doesn't have a definite value, physicists say it's in a superposition of the possible values it could take on. In the pub, we used a translucent shimmer to represent a superposition of blue and pink. Superposition states have no real analog in everyday life, and they are incredibly fragile. When you touched the translucent parts of your drink in the pub, you destroyed the superposition, turning it into a definite state of either pink or blue. The pub was a special place where only a customer's touch destroys the superposition of the drinks. Such selective destruction doesn't happen in the real world. When scientists measure a tiny particle's properties, it destroys superposition. But almost any kind of interaction with the world around it can do the same, including interactions with the light in a room. (Importantly, the process does not depend on a conscious observer being around to see it.) 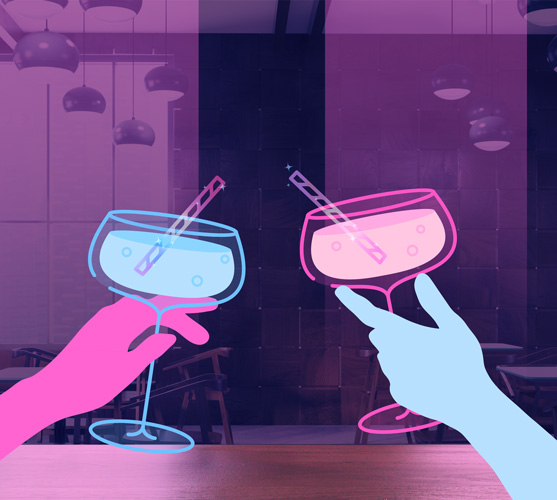 In fact, physicists can create conditions that result in anywhere between zero and 100% probabilities for measuring a given property. To guide them, they use something called a wave equation that contains the information needed to calculate the probabilities of measuring certain properties. The equation is similar to the equations that describe sound waves, vibrating strings and gravitational waves, although the mathematical similarities do not necessarily imply an underlying physical similarity between all these systems.

Real-life particles can also behave like the pair of entangle-tini drinks at the pub. Close interactions between particles can forge a relationship between the two that's displayed in the form of strongly linked, or correlated, properties. For such entangled particles, knowing something about one tells you something about the other.

At the pub, we represented entanglement as the instant appearance of a different color for your friend's glass or straw when you touched yours. It's important to note this interpretation of entanglement is the most common one today, but it wasn't always accepted. In general, the pub allows your eyes to see the quantum state of your drinks at all times, including superpositions and their instant destruction. The scientists who first discovered the rules of quantum mechanics didn't have this luxury -- they could only measure one property of a particle at a time. These scientists deployed a lot of clever reasoning to figure out what was going on.

To learn more about the history of the early quantum scientists' discoveries, you can visit the Quantum Museum. And to learn more about how current scientists are trying to use superposition and entanglement to make more advanced technologies, visit The "Future of Quantum" Tour page.

The "Future of Quantum" Tour

The New Quantum Frontier is brought to you by Inside Science, an editorially-independent news service of the American Institute of Physics.