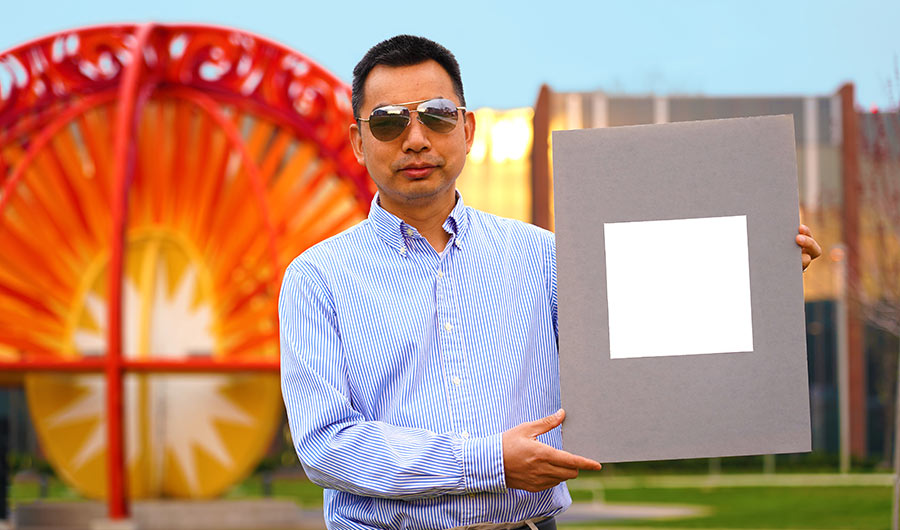 Xiulin Ruan, a mechanical engineer at Purdue University, displays a sample of the ultra-white paint his lab developed.

(Inside Science) -- Typical commercial white paints reflect only 80% to 90% of sunlight and fail to help buildings stay cool during the day. For the past six years, mechanical engineer Xiulin Ruan at Purdue University in West Lafayette, Indiana, and his colleagues sought to create whiter paints to cool buildings "similar to an air conditioner, but without the need of electricity," he said. They explored more than 100 materials, narrowing them down to 10 and testing roughly 50 different formulations of each material.

The one that performed best is based on barium sulfate, a compound used to whiten photo paper and cosmetics. Its molecular structure can make it highly reflective to solar wavelengths of light. When it does absorb energy from heat or other sources, it typically emanates it out at infrared wavelengths that zip unobstructed through air into outer space instead of heating its surroundings.

The scientists made sure the paint had a high concentration of barium sulfate particles of many different sizes. The wavelength of light each particle scatters depends on its size, so a wide range of particle sizes helps the paint scatter more light from the sun.

The new paint reflects up to 98.1% of sunlight, compared with the 95.5% of sunlight reflected by the researchers' previous ultra-white paint based on calcium carbonate. They suggest this white may be the equivalent of the blackest black, "Vantablack," made using carbon nanotubes, which absorbs up to 99.9% of visible light.

Outdoor tests of the new paint revealed it was the coolest on record, keeping surfaces 19 degrees Fahrenheit cooler than their surrounding surfaces at night, and 8 degrees cooler than surroundings under strong noon sunlight. It even worked in the middle of winter -- when the ambient temperature was 43 degrees Fahrenheit, it still managed to lower temperatures by 18 degrees Fahrenheit. (This latter quality suggests this paint might work best for hot climates that would benefit most from cooling, although Ruan notes they "may come up with dynamic paints that can switch properties for other climates in the future.")

The scientists estimate that if 1,000 square feet of roof were covered with this paint, it would provide a cooling power of 10 kilowatts, more powerful than the central air conditioners used by most houses. The scientists noted they could likely make the paint even whiter by increasing the particle concentration, although too high a concentration would make the paint easier to peel off. Ruan noted that painting 0.5% to 1% of the Earth's surface with their paint, for example by coating roofs, roads, unused land and so on, might even help stop global warming.

Barium sulfate is common and environmentally safe, and powders of it are roughly half the cost of the titanium dioxide powders often used in commercial white paints, Ruan said. The scientists also noted the methods they used to make their paint are compatible with commercial paint fabrication techniques, and can likely handle conventional outdoor conditions.

In the future, the researchers want to optimize and commercialize their paint for a wide range of applications, including buildings, automobiles and outdoor equipment. They would also like to develop colored versions, which won't achieve as much cooling but "can still provide significant energy savings compared to commercial paints of the same color," Ruan said.