Old females decide when and where their tribe will travel.
Image 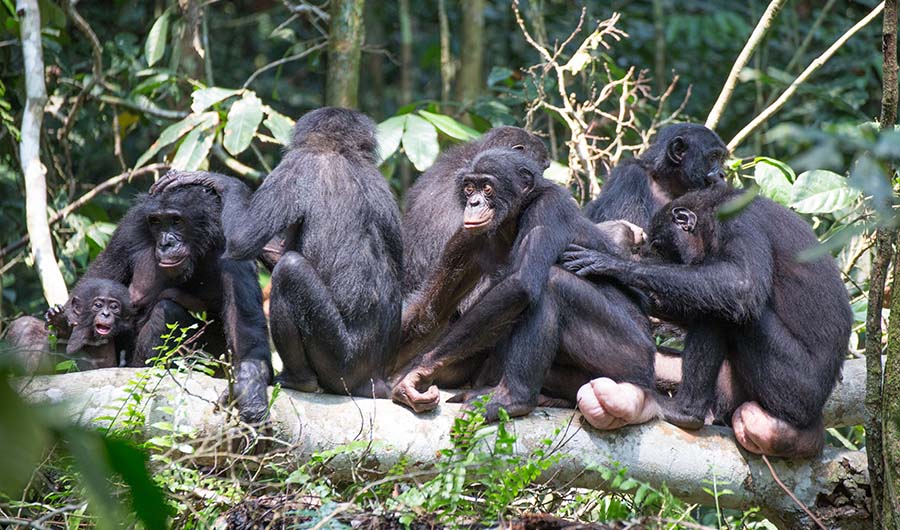 Female bonobos groom one another in the Luo Scientific Reserve in the Democratic Republic of the Congo.

This image may be republished only with this story.

(Inside Science) -- When bonobos lounge in a fruit tree in the Luo Scientific Reserve in the Democratic Republic of the Congo, the males are often the first to get restless. A few of the wiry apes climb down and begin dragging branches to get attention, sometimes striking out into the forest in apparent efforts to get the group moving. But most of the time, the other bonobos ignore them.

"Until the old females move down and start moving, all the group members don't move," said Takeshi Furuichi, a primatologist at Kyoto University's Primate Research Institute in Inuyama, Japan. "Usually older females determine when and where to go."

Nahoko Tokuyama, Furuichi's colleague at the Primate Research Institute and lead author of the study, spent nearly 1,700 hours watching one of the Luo Scientific Reserve's bonobo communities. As expected, the oldest females usually called the shots, venturing off on their own schedules with the rest of the group in tow. The findings, recently published in Behavioral Ecology and Sociobiology, help reveal how some of humanity's closest relatives maintain peace and order in their female-dominated societies.

Bonobos and chimpanzees are humans' closest animal relatives. When the ancestors of humans split off from other apes, chimps and bonobos were not yet separate species, so we share equal kinship with both. But in the roughly two million years since chimps and bonobos split into neighboring populations in central Africa, they have evolved radically different social behaviors.

In chimpanzee society, every adult male is dominant to every female, and the strongest social bonds are between males. Males regularly attack, and sometimes kill, adults and babies from their own and neighboring groups, sometimes forming coalitions to do battle together. In contrast, said Furuichi, bonobo societies are relatively peaceful, with squabbles rarely escalating to serious violence. Female bonobos spend their time together in the center of the group, grooming, eating and socializing. Often, two females will embrace and rub their genitals together -- one of a rich suite of sexual pastimes common among bonobos of various sexes and ages.

The lower ranks of bonobo society are gender-balanced, with some males dominant to some females, and vice versa. But the highest-ranking individuals in a group are always the old females, said Gottfried Hohmann, a primatologist and bonobo specialist at the Max Planck Institute for Evolutionary Anthropology in Leipzig, Germany, who was not involved in the study.

As an example of the supremacy of bonobo matriarchs, Hohmann described what happens when a bonobo kills a monkey or a forest antelope. If the hunter reveals his or her prize to the rest of the group, an old female will eventually come and place her arm over it, calmly taking possession. Then, said Hohmann, other bonobos will gather around, arms outstretched for their share.

"[Old females] are not monopolizing the food in the sense that they say, 'You all have to wait until I'm satiated,'" he said. "They allow others to participate, but in a controlled way."

Why are old females so respected in bonobo society? Past research offers some clues.

While bonobos almost never kill each other, they do sometimes display aggression. In a study published last year, Tokuyama and Furuichi reported that if a male threatens a young female or pressures her for sex, the old females swiftly come to her defense.

"Many females around her collaboratively chase and attack and even bite that male severely," said Furuichi. "And then that male usually flees while screaming."

By cooperating, the slightly smaller females protect themselves and enforce polite behavior on the part of the males, Furuichi explained. In contrast, chimpanzee females rarely cooperate, and they don't always get to choose whom they mate with.

The cooperation between bonobo females is particularly interesting given that they typically aren't related. As with chimps, bonobo males usually stay in the same location their whole lives, while females disperse to join new groups as they near adulthood. When young female bonobos join new groups, they immediately form bonds with old females who can protect and support them, said Furuichi.

At first glance, the matriarchs don’t seem to benefit much from their young female followers. But in fact, said Furuichi, they gain a huge evolutionary advantage -- through their sons. Old females are so influential in bonobo society that their sons become the most dominant males, even when those sons are younger and smaller than their rivals. The favored sons have more mating opportunities because they get to sit in the center of the group, where the females cluster together. That means more grandchildren for the matriarch, and more of her genes in future generations.

In the new study, the researchers investigated bonobo group movements to learn how the apes maintain their unique social structure. Over four years, Tokuyama followed a particular group of bonobos through the jungle, recording 254 occasions when they traveled together from one foraging spot to another. Each of the 15 adults initiated group movements at least once, but the bulk of departures were led by the three oldest females. The oldest, a 49-year-old matriarch named Bokuta, got the group moving three times more often than would be expected by chance.

The study focused on a single group of bonobos, and there is probably some variation among groups, said Tokuyama in an email. Nevertheless, researchers have observed similar behaviors in other groups, suggesting that matriarch-initiated movements are a common feature of bonobo society. Bonobos may benefit from following old females because of their knowledge of where to find food, as well as the protection they offer to young females, according to the researchers.

The findings are no surprise to Hohmann, who has observed the leadership of bonobo matriarchs in his own research. But, he said, this is the first time anyone has systematically analyzed which bonobos initiate group movements -- a challenging task in the apes' dense jungle habitats.

Researchers don't know for sure why female bonobos can rise to be leaders, while female chimpanzees are comparatively powerless. But, said Furuichi, many think the key difference is that bonobo males can't tell when their females are fertile.

Both chimp and bonobo females go through receptive periods in which their genitals swell, signaling their readiness for sex. But in chimpanzees, this only happens once every few years, after a female has weaned her latest baby and is ready to become pregnant again. Receptive chimp females are rare, and males fight fiercely for any chance to mate. This has apparently caused male chimps to evolve big, strong bodies and aggressive personalities, possibly setting the stage for chimpanzee patriarchy, according to Furuichi.

Female bonobos, in contrast, become sexually receptive during both fertile and infertile parts of their life cycle. At any given time, bonobo societies have more female sex partners to go around, and each copulation is less likely to result in pregnancy. Thus, bonobo biology places less pressure on males to compete for and control mates, potentially leading to social systems with more female autonomy, said Furuichi.

Human females seem to have a different way of hiding when they're fertile: They got rid of the swollen-genital stage altogether, becoming potentially interested in sex at any time, said Furuichi. Researchers can only speculate about what this means for human societies, which are famously diverse and flexible in their approaches to sex and gender. But, said Hohmann, bonobos prove that it's possible for peaceful, egalitarian societies to emerge, even without sophisticated human achievements like the women's rights movement.

"There are mechanisms in nature that do not promote the use of violence and aggression," he said. "Bonobos are a wonderful example of that."

Editor's note: The text of this article has been changed to clarify the researchers' roles in the study.