Elephants and other mammals that lost their scrotums offer a peek at the genitals of our common ancestor.
Image 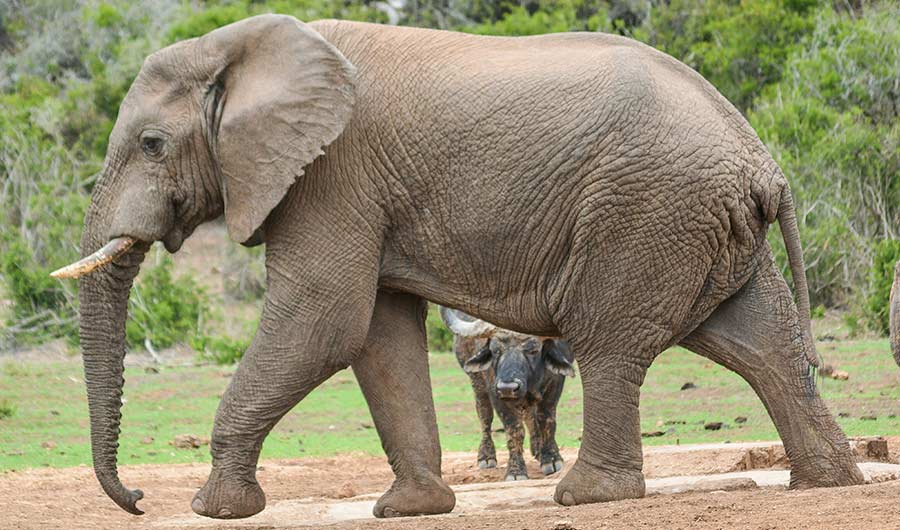 (Inside Science) -- It may seem that there's nothing ballsier than a big bull elephant -- but if you looked for the actual evidence, you wouldn't find it in the usual place. Elephants retain their testicles deep in their bodies, as do manatees, cape golden moles, rock hyraxes and most other species in the group Afrotheria.

Now in several of these modern species, researchers have found the decayed remnants of ancient genes that once allowed their testicles to descend. The findings suggest that the first afrotheres, and therefore the first placental mammals, had dangling testicles much like humans do today.

"Otherwise it's very hard to explain why you find broken pieces of these genes in the genomes of species that lack testicular descent," said Michael Hiller, a computational biologist at the Max Planck Institute in Dresden, Germany, and senior author of the study.

More stories from Inside Science about evolution and extinct creatures

Taking The Temperature Of A Dinosaur

The placental mammal group consists of all mammals except marsupials, echidnas and platypuses. Most placentals have body temperatures that are too hot for sperm, and that is thought to be why nearly all of them have testicles that descend during development, ending up in the lower abdomen or further down in a scrotum.

Afrotheres branched off early from the placental mammal family tree, and their internal testicles make them a puzzle. For one thing, it's not clear how they can produce viable sperm. Some members of the group, such as tenrecs and golden moles, have body temperatures low enough for sperm production, but other afrotheres such as elephants and elephant shrews are warm enough that they should, in theory, be sterile.

Researchers still don't know how elephants stay fertile, but they may have just solved another mystery: which testicle position came first. Based on the fossil record and comparisons of modern species' traits, researchers have envisioned the first placental mammals as small, pointy-toothed creatures that fed on insects. But did they have internal testicles, or dangly ones? Did afrotheres lose their scrotums, or did other placental mammals gain them?

In the new study, published today in the journal PLOS Biology, the researchers solved this puzzle by examining two genes known to be essential for testicular descent in humans and mice. If afrotheres never had descended testicles, one would expect them to lack those genes completely. Instead, the researchers found copies of the genes in all the afrothere species they studied, in most cases mutated so as to be nonfunctional.

Genes are complex, and it's highly unlikely that the same one would evolve independently multiple times, said Hiller. Thus, the presence of the same genes in all placental mammals -- regardless of whether their own testicles actually dangle -- indicates that their common ancestor's did.

"That's the key result for me, because that has broader consequences than whatever happened within afrotheres," said Lars Werdelin, a paleontologist at the Swedish Museum of Natural History in Stockholm, who reviewed an earlier draft of the paper but was not otherwise involved in the research.

Marsupials also have external testicles, although their versions look different from those of placental mammals, said Werdelin. If descended testicles were ancestral in placentals, then they might have evolved even earlier, at the dawn of mammals -- and the human scrotum might share a common origin with the kangaroo's.

The study also suggests that testicular descent was lost not once, but multiple times -- and that raises questions about why so few mammals keep their testes safe inside.

In elephants and rock hyraxes, the testicle descent genes had no obvious mutations that would destroy their function. But four types of afrotheres -- manatees, cape golden moles, tenrecs and cape elephant shrews -- had broken versions of the genes, and in each case, the genes were broken in different ways.

Moreover, the testicular descent genes in those four lineages seemed to have been accumulating mutations for different lengths of time. Genes usually begin to decay as soon as they are not needed, and by assessing the levels of decay, the researchers concluded that afrotheres evolved internal testicles at various times spanning more than 50 million years.

It makes a certain intuitive sense that internal testicles would evolve more than once, said Werdelin.

"It's such a stupid thing to hang a very important part of your anatomy outside of the body cavity," he said. "One would expect that if the opportunity is there to have internal testes, it should evolve."

But that doesn't explain why internal testes are almost exclusively found in afrotheres. If it's so easy for them to evolve, why don't we see them in all kinds of mammals, from horses to humans?

"That's a fascinating question I have literally no answer for," said Hiller.

There are uncertainties in the time estimates for when afrotheres lost testicular descent, noted Mark Springer, an evolutionary biologist at the University of California, Riverside, who is working with the researchers on another project but was not involved in this study. Nevertheless, he said, the findings demonstrate the value of dead genes for showing what extinct creatures looked like -- even parts too squishy to fossilize.

"To me, this is sort of like fossil hunting, but with genomes," said Springer. "It's a wonderful example of using dead genes to try and trace history."