Meet the Biggest Censor of All: the Universe

Meet the Biggest Censor of All: the Universe

Theoretical physicists contemplate the seemingly impossible situation of a point in space-time where gravity goes to infinity.

(Inside Science) -- What exists inside black holes? Wormholes? Entire universes? The back of a bookcase (spoiler alert)? Since nothing can communicate from inside a black hole to the outside world, we may never know for sure. But even if astrophysicists can't directly see what's going on behind the curtains of black holes, they can still make guesses.

One particular item of interest is the concept of a gravitational singularity -- a hypothetical point in space-time where gravity would go to infinity. Even though Albert Einstein's theory of general relativity predicts the existence of singularities inside black holes, it can't describe what actually happens at those points. This gap in our understanding of the universe is like a plot hole where a writer introduces a monster in the first chapter, but somehow can't describe what the monster does at all -- it's a Chekhov's gun that leaves us all hanging.

Research in astrophysics is often limited by the amount of data that scientists can gather from space. Oftentimes that is simply because we can't build instruments powerful enough to detect these events in our universe, but other times the information we want to gather is guarded by the laws of physics. For instance, any information that exists within the event horizon of a black hole simply cannot escape the black hole's gravitational pull and reach us, no matter how much better our telescopes can get. In order to try making sense of it all, theoretical physicists are using a multitude of complex mathematical tools to explore what exactly happens in the strange and well-hidden areas of the universe.

A mathematical conundrum posited by Einstein

"Einstein's equations [of general relativity] predict that singularities will form under certain circumstances -- places where the equations break down, and the gravitational fields become infinite," said Toby Crisford, a doctoral student in theoretical physics at the University of Cambridge in England.

If a gravitational singularity existed near Earth, the deterministic nature of our laws of physics would break down. Then, literally anything could happen -- a black hole appearing out of nowhere, time flowing backwards or even the sun transforming to become the head of a baby. Since this doesn't make sense -- even though it is allowed by Einstein's theory of general relativity -- scientists are trying to come up with explanations that can reconcile the concept of singularities with Einstein's equations, and of course, with reality.

One leading conjecture to remedy this conundrum is known as cosmic censorship. Proposed in 1969 by famous British theoretical physicist Roger Penrose, the conjecture argues that no singularities -- except that of the Big Bang -- can be observed from the rest of space-time. Therefore, Penrose believes that if singularities existed in our universe, they would always be sealed inside black holes, or as he calls it -- cosmically censored. 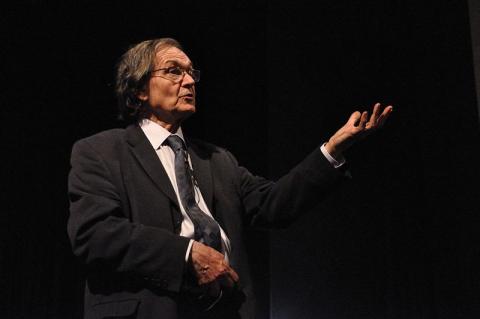 Roger Penrose during a speech in 2011

If this is true, then even if singularities existed, their effects would be confined to within the black holes that house them, where other exotic physics such as the yet-to-be understood quantum gravity can take over, and the plot hole introduced by Einstein's equations will finally be patched up, more than 100 years since its creation.

While most scientists are fairly confident that the conjecture is true -- since we haven't yet detected a singularity -- definitive proof remains at large, nearly 50 years since Penrose first questioned Einstein's predictions. Since an experimental approach is almost impossible, physicists have been looking into theoretical scenarios in which so-called naked singularities could defy the conjecture, within universes with all kinds of weird dimensionalities or space-time curvatures that are different from our own.

"There have been counter examples to the cosmic censorship conjecture in higher dimensions," said Crisford, such as the five dimensional ring black holes that theorists modeled to explore specific scenarios where naked singularities could sit unmasked in space-time, without a surrounding black hole.

According to Ivan Agullo, a theoretical physicist from Louisiana State University in Baton Rouge, calculations about singularities are often so difficult that theorists can only look for solutions in certain set ups, such as space-time with a specific curvature or even in different dimensions. This is similar to how physicists often leave out certain variables when estimating the path of a projectile, because exact solutions can be extremely complicated if all variables are to be considered, such as aerodynamics, variations in gravity or even the Coriolis effect.

"What we can do is to accumulate knowledge, by testing these arguments in scenarios where the equations are actually solvable," Agullo said.

The latest paper by Crisford's group, published May 2 in the journal Physical Review Letters, takes a new approach to the problem. It presents a counterexample to Penrose's conjecture, but in four dimensions -- three of space and one of time. It is the first time anyone has mathematically constructed a naked singularity within a 4-D space-time. However, the negatively curved space-time they used in their calculations -- known as anti-de Sitter space -- is still quite different from our 4-D reality, and the curvature of space-time itself also remains a hotly debated topic.

"But I guess [our calculation] is one step closer to reality," Crisford said.

Other researchers are taking a different approach that looks beyond what's ordinarily prescribed in Einstein’s general relativity equations.

An international collaboration among theoretical physicists from Brazil, Italy and Chile looked into the effects generated at the quantum level by the matter surrounding singularities. Their paper, published in March, also in Physical Review Letters, claims that these quantum effects can create the event horizon that shields an otherwise naked singularity from outside observers, even when the naked singularity exists as a solution to the classical Einstein equations.

First, they began with a model where a rotating naked singularity exists in three-dimensional space-time -- two in space and one in time. They discovered that as soon as the model was modified to include additional quantum effects, an event horizon formed around the singularity -- or a "quantum dress," as they called it.

They also looked into a different scenario, where they started the model with a rotating black hole right off the bat. In this case, they found the inclusion of quantum effects led to an instability inside the black hole. This instability, they suspect, might be able to preserve the laws of physics that would otherwise stop making sense, or more specifically, the predictability of the physics inside the black hole. While quantum effects seem like a blanket term for many different physical phenomena, here the key effect at play is a concept conceived by Stephen Hawking in 1974, known as Hawking radiation.

"A perhaps cartoonish way of understanding Hawking radiation, is that according to quantum physics, even if in vacuum, there’re constantly particles and anti-particles being created," said Marc Casals, one of the authors of the paper and a theoretical physicist at the Brazilian Center for Research in Physics in Rio de Janeiro. "When this happens near a black hole, one of them can fall into the black hole, and the other one can escape, and it'll look like the black hole is emitting out radiation."

In extreme situations, effects that seem negligible can become significant, just like how special relativity explains why the clocks on board GPS satellites slow down at high orbital speeds. Unless you live on a space station they won't affect the watch on your wrist nearly as much.

Similarly, scientists believe that Hawking radiation, though rooted in tiny quantum effects, plays a very important role in the physics of black holes. Even though this all sounds highly theoretical and technical, experimentalists are actively trying to directly observe these effects here on Earth. You might have heard the claim that scientists at the Large Hadron Collider in Europe might create a scary microscopic black hole here on Earth. This led to minor hysteria from members of the public who feared a doomsday scenario where the black hole would devour the planet. In that specific scenario, Hawking radiation is the key effect that will cause the tiny black hole to disintegrate within a tiny fraction of a second, way before any damage could be done.

To quantum and beyond

Studies of black holes, naked singularities and other exotic phenomenon could help researchers understand what is often the most difficult of the four fundamental forces to grasp: gravity. Gravity is by far the weakest force, and its close tie to general relativity definitely doesn’t make it any easier to understand. While all the other three forces -- weak, strong and electromagnetic -- have been unified under quantum field theory, gravity remains stranded by itself, as the last elusive piece in the search for a "theory of everything."

"We know that general relativity is not a complete theory of everything," Crisford said.

Within the Big Bang and black holes lie the keys scientists need to fully understand gravity. However, the same gravity that makes black holes interesting also prevents us from looking into them -- by creating event horizons that make up the black holes in the first place. The concepts of singularities and cosmic censorship, tangled up with the rest of these mysteries, represent holes in the incomplete puzzle for the "theory of everything." Will physicists ever find the missing pieces? Nobody knows for sure.

One way scientists are advancing the quest is with quantum gravity, a field still in its relative infancy. A complete theory of gravity, which quantum gravity might provide, would not only tell us what happens at the center of black holes, but also likely fill in the plot holes in the current understanding of the universe.

"In order to tackle cosmic censorship completely, ultimately we will need to understand quantum gravity," said Agullo. "But it's a very difficult topic."

Researchers Study Violinists To Learn How Humans Act in Synchrony
Alligators May Be Able to Survive Venomous Snake Bites
New Theory Says We’ve Been Wrong About How Bubbles Pop
Crustacean Genes May Solve Debate Over How Insects Evolved to Fly
Some Beetles Survive Being Eaten, New Study Finds
END_OF_DOCUMENT_TOKEN_TO_BE_REPLACED

COVID-19 Vaccine, Sharks and Mezcal
Crabs Use Belly Sounds To Communicate
Touring The Trinity Test Site
Protests, A Retracted Paper, and a Super-Earth Planet
Why Is an Empty Shampoo Bottle So Easy To Knock Over?
END_OF_DOCUMENT_TOKEN_TO_BE_REPLACED