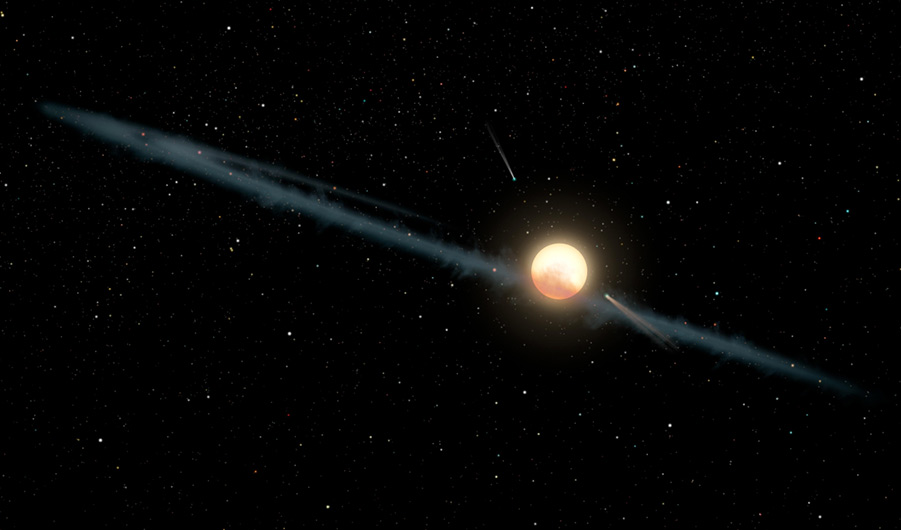 An artist's conception of KIC 8462852 surrounded by a ring of dust.

(Inside Science) -- In 2015, astronomers noticed that a star named KIC 8462852 was flickering unusually. Some researchers suggested that the observations could potentially be explained by "alien megastructures." But a new study finds a relatively simple explanation: dust.

The F-type yellow-white dwarf star, which is slightly larger and hotter than our sun, sits about 1,480 light-years from Earth, in the constellation Cygnus the Swan.

When the scientists analyzed data from NASA's Kepler space telescope, astronomer Tabetha "Tabby" Boyajian, now at Louisiana State University, and her colleagues found dozens of strange instances of KIC 8462852 dimming by up to 22% that did not appear to follow any pattern, with such dips lasting anywhere from days to weeks. Followup research also suggested the star's overall average brightness had also dimmed by 14 % between 1890 and 1989.

The research raised the possibility that astronomers had detected signs of intelligent alien life. Specifically, researchers have suggested that the star is surrounded by a Dyson sphere, a giant artificial structure built around a star to capture as much of its light as possible. Famed physicist Freeman Dyson suggested that such megastructures could help power an advanced civilization.

Now researchers suggest that the slow annihilation of an orphaned moon may have affected observations of the star. When an exoplanet is destroyed by violent interactions or even a collision with its parent star, any exomoons orbiting that exoplanet can go into orbit around that star. The star's radiation can then strip away the outer layers of such exomoons, essentially turning them into titanic comets. Eventually, after millions of years, such an exomoon might completely evaporate.

If huge clouds of gas and dust from a disintegrating exomoon passed between Boyajian's star and Earth, this could help explain short-term fluctuations scientists have witnessed in the star's brightness. While the smaller dust motes would quickly vanish, larger dust grains may linger and form a disk of debris around the star. That might help explain the long-term fading that researchers have detected.

This is the first time any suggestion regarding Boyajian's star could account for both the random nature of its short-term dimming as well as the longer-term fading.

"Even if we can't confirm any direct detections of exomoons yet, we at least have a hint that they do indeed exist," said study lead author Miguel Martinez, an astrophysicist now at Northwestern University in Evanston, Illinois.

The scientists detailed their findings in the November issue of the Monthly Notices of the Royal Astronomical Society.