Their larvae slowly suck the arachnids' guts out after wasps infiltrate the spiders' webs.
Image 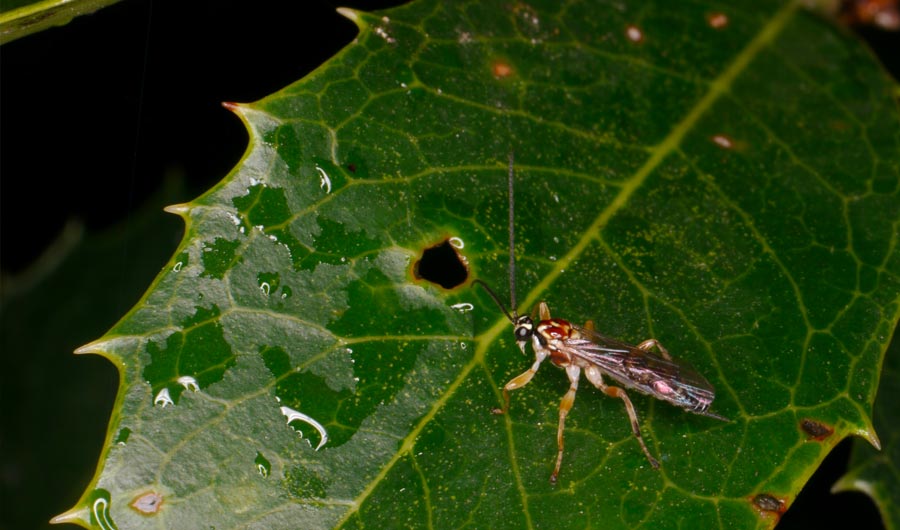 (Inside Science) -- Sometimes, the best way to beat a complicated ambush is to lay a counterambush.

A species of parasitic wasps uses sophisticated strategies to lure spiders into playing the unwilling provider for the wasps' gut-sucking offspring.

Nihonhimea japonica is a tangle-web spider found in East Asia. Rather than spinning your typical spider web, these spiders usually go 3D, creating an arena of death roughly the size of a soccer ball. Insects flying through the area knock into vertical web strands and fall down onto a more tightly-woven, horizontal sheet. At this point the N. japonica spider springs down from a hiding place in a cone-shaped leaf hanging in the middle of the web. It then stings its prey before consuming it.

As with many insects, these spiders have a highly specialized parasitic nemesis – a wasp called Zatypota maculata -- with a couple of macabre childcare strategies. Keizo Takasuka, a biologist at Keio University in Japan and the lead author of a study published March 29 in the Journal of Zoology said the sneakiest involves the wasp luring their spider victim into its own trap. The wasps will dive bomb into the flat platform set up by the spiders as if they were an ordinary prey species. When the spider drops down to catch its meal, the wasps sting the spiders near the mouth or between their legs.

If the spider is too wise to emerge from its hiding place, some wasps have another trick up their sleeves. They will approach the leaf very slowly and carefully, then sneak in and attack the spider in its own home. In both strategies, the wasp paralyzes the spider for five to 10 minutes, enough time to lay an egg on its abdomen before flying off.

As for the spiders, the horror only just begins with the initial attack. Once the egg hatches in about four days, the larva will stay on its abdomen sucking out its fluids. This continues for about 10 to 14 days, at which point the larva kills off the spider and continues to eat the rest of its insides. The larva then makes a cocoon and morphs into an adult wasp, ready to terrorize a new generation of tangle-web spiders.

“[Parasitic wasps] are among the most fascinating insects,” Takasuka said, adding that other types of wasps are even known to control the minds of their prey. He said this “small war among the spiders and wasps” happens all around people’s homes in Japan without most being aware of it.