New Caledonian crows may find tool use fun, according to a new study.
Image 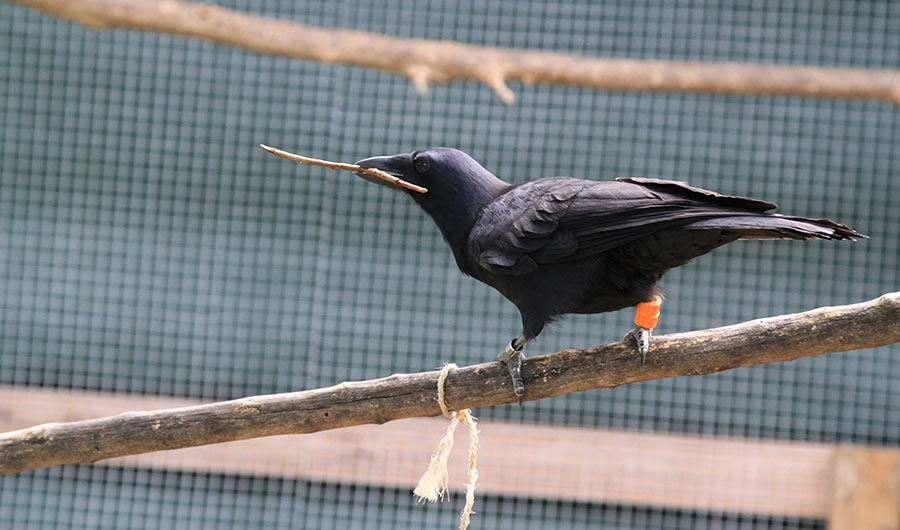 (Inside Science) -- Getting food is nice. But scoring that food through clever tool use is even better, according to a study on a famously smart species of crow. The findings suggest that humans aren't the only animals to enjoy puzzles, games and challenges for their own sake.

New Caledonian crows live on a cluster of remote islands in the South Pacific. The crows are well known to scientists for their ability to build and use tools, but until now, no one had examined the crows' own subjective reasons for doing so, according to Dakota McCoy, a biologist and doctoral candidate at Harvard University and first author of the study, which was published today in the journal Current Biology. In fact, there was hardly any research on how nonhuman animals feel about exercising their brains.

That's not too surprising, given that until recently, few scientists would even attempt to study something as hard-to-measure as animal emotions. But in the last 15 years, researchers have developed a new trick for getting inside animals' heads. McCoy explained how it works in a conversation with Inside Science's Nala Rogers. The interview has been edited for clarity and brevity.

Nala Rogers: Just how is it that scientists can assess how an animal is feeling?

Dakota McCoy:  There's a lot of data from humans and other animals trying to figure out how can you actually test mood. With humans you can ask them verbally how they're feeling. But you also can give them this ambiguous stimulus where their interpretation depends a lot on their mood at the moment.

So how did you apply this idea to the crows?

The outcome of that is that they would fly very quickly and approach the box every time it was on the left. And would go very slowly or even not at all to the box on the right.

So they clearly understand that the same box in different contexts means something different. And we can construct this ambiguous state by placing the box right in the middle. And when you do that, how quickly the crow approaches indicates its expectations.

Do they expect three pieces of meat? Do they expect just a tiny scrap of meat? Or something in between? And so we're able to use the time of approach as proxy for how positive their mood is.

So you had this mystery box, and you used it to get insights about crows' moods. But first, you offered the crows a piece of meat in a block of wood. How did they get the meat out?

Then for the control condition, everything was exactly the same, except the meat was within reach sitting in that wood block. So they could just reach in with their beak and grab the meat.

How much faster were the birds in approaching the mystery box after using a tool, versus when they hadn't used a tool?

The average time it took crows to approach the middle box after tool use was 12 seconds. Whereas after getting a reward without needing use a tool, it was 23 seconds.

Does it look like the crows are having fun when they're using tools?

Oh, for sure, yeah! These crows are incredibly charismatic and really goofy and really smart. So when you spend a summer doing experiments with them, you spend a lot of time watching them just do what they feel like.

And you can tell when they're bored by their body language. They won't come down to the table, they won't participate, they'll just stay up at the perches at the back. But suddenly if you're doing an experiment where there's a lot of complicated thinking involved, a lot of the birds seem much more engaged. They participate for longer; they immediately fly down to participate instead of waiting at the back. They are alert and happy instead of looking sullen and glum.

But of course you can have all of these impressions as a person watching these animals, but you can't actually conclude as a scientist that they're feeling the things it looks like they're feeling, until you use some method like you used in this study.

In this study, you gave the birds simple tools to use -- just short sticks. But they're capable of doing more complicated things, right?

Yes, the New Caledonian crows have very big brains and they are outstanding tool manufacturers. So they'll take a stick, strip all the leaves off, and turn it into a hook by bending the tip. Or they'll take a leaf and painstakingly cut it into a staircase shape so they can easily use it with the jagged edges on one end and poke it into crevices.

Crows are really good at finding tools even when you think you've swept the entire aviary to not give them access to a second tool. So often you'll give them an experiment and think, like, "Okay, I've set this up really well," and then they'll sort of start looking around at the ground, and you're like, "Oh, no." And then they fly down and find a little twig somewhere, quickly shape it into a tool, and use it to cheat at your experiment.

And how do you know it was actually the tool use that the birds enjoyed, rather than something else, like a sense of accomplishment from putting in more effort?

We gave the crows two new conditions. One was just easily picking up food right from the table. And then the other condition, the crow had to travel around the aviary to four different places to pick up food. And again, right after each of those experiences, we presented the ambiguous box. And we found that the crows were more quick to approach the box, more optimistic about its contents, in the easy condition versus the effort condition.

We feel that that's pretty strong evidence that it's not just that they had to work harder or spend longer. It really is somehow the actual presence of a tool and the use of a tool itself.

So you found that using a tool can make an animal happy. Are there any practical applications for this information?

This suggests that we may be able to really improve the lives of captive animals, not only by housing them socially and being sure they've gotten a lot of space and time to themselves, but also by giving them active, complex species-specific enrichment to do.

It seems like there's already kind of an understanding that it's good to provide enrichment to animals in their enclosures. So what do you think your research adds to the knowledge about how we should treat captive animals?

Many people who work closely with animals, especially zookeepers, already get it that to make an animal happy you've got to give them fun tasks to do. You can't just give them space and food.

So this is -- in some ways, it's not that new. But in other ways I think it's extremely new, especially to research scientists that are accustomed to having a bunch of rules set down by IUCAC -- which is the agency that oversees the welfare of laboratory animals -- where, okay, the cage has to be X feet wide and X feet tall, they have to have water freely available, and they have to be fed this much per day.

What our study shows is that you can enrich them even further if you are giving them more active and complex stuff to do. So I think this is the kind of rigorous standard of proof needed to change policies about captive animal welfare, in addition to the years of really important and valuable anecdotal evidence from zookeepers and pet owners and other people that work closely with animals.

I have always been fascinated by the octopus.  I would love to read a study on whether octopuses show a happier mood after they've been given something cool to do like unscrewing a lid from a jar.

Will you please go do that study?

Yeah, I was just thinking, like, "Man, I should do that study."