Planet K2-18b is about twice as wide as Earth and located about 110 light-years away.
Image 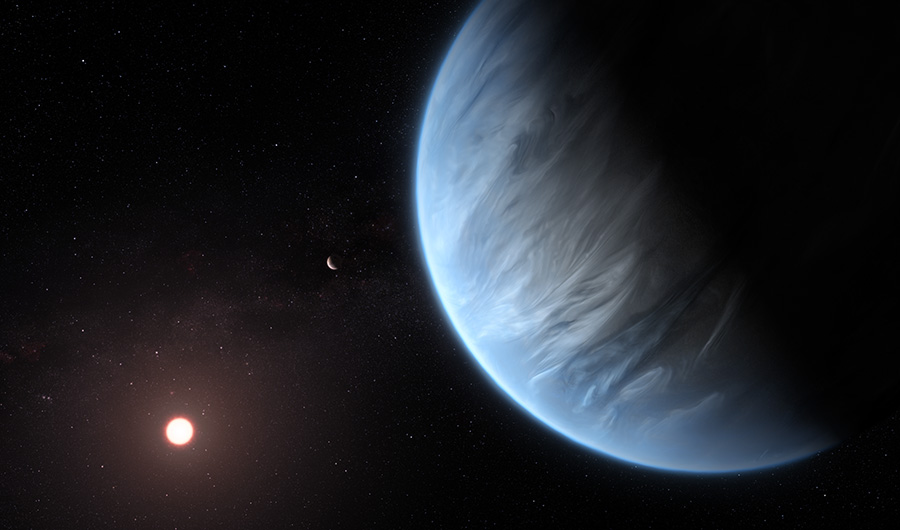 An artist's impression of the planet K2-18b and its host star.

(Inside Science) -- For the first time, scientists have detected water on a distant planet lying within its star's habitable zone, a new study finds.

Since there is life virtually everywhere there is water on Earth, the search for life outside Earth typically concentrates on worlds that are the right distances from their stars to host liquid water on their surfaces. This range of distances is often called the habitable or "Goldilocks" zone.

Scientists focused on K2-18b, an exoplanet about eight times more massive than Earth and twice as wide, making it a "super-Earth," a type of planet with a mass between that of Earth and Neptune. The planet's likely Mars-like density suggests that it has a rocky composition.

The exoplanet, first discovered in 2015 by the Kepler spacecraft, orbits a red dwarf star a little more than a third of the mass of the sun located roughly 110 light-years from Earth in the constellation Leo. It circles its star about seven times closer than Earth does our sun, but it nevertheless lies within the red dwarf's habitable zone, since the star is colder than our sun.

By analyzing data captured by the Hubble Space Telescope in 2016 and 2017, the researchers detected telltale signs of water vapor in starlight filtered through K2-18b's atmosphere. They also suggest its atmosphere may contain hydrogen and helium. Outside the solar system, this planet is "the best candidate for habitability that we know of right now," said study lead author Angelos Tsiaras at University College London.

It remains unknown just how much water K2-18b actually has -- water vapor could make up anywhere from 0.01% to 50% of the exoplanet's atmosphere. The exoplanet might be covered by an ocean much deeper than Earth's, or its surface might be completely dry, with water found only within its atmosphere, or something in-between, the researchers said.

The next generation of space observatories, such as the James Webb Space Telescope and the ARIEL satellite, may help reveal how much water K2-18b and other exoplanets have in their atmospheres, and also the presence of other molecules, such as ammonia and methane, said study co-author Ingo Waldmann at University College London.

The scientists detailed their findings online Sept. 11 in the journal Nature Astronomy. An independent study from scientists at the University of Montreal and their colleagues has made similar findings, which are scheduled to appear in the Astronomical Journal.