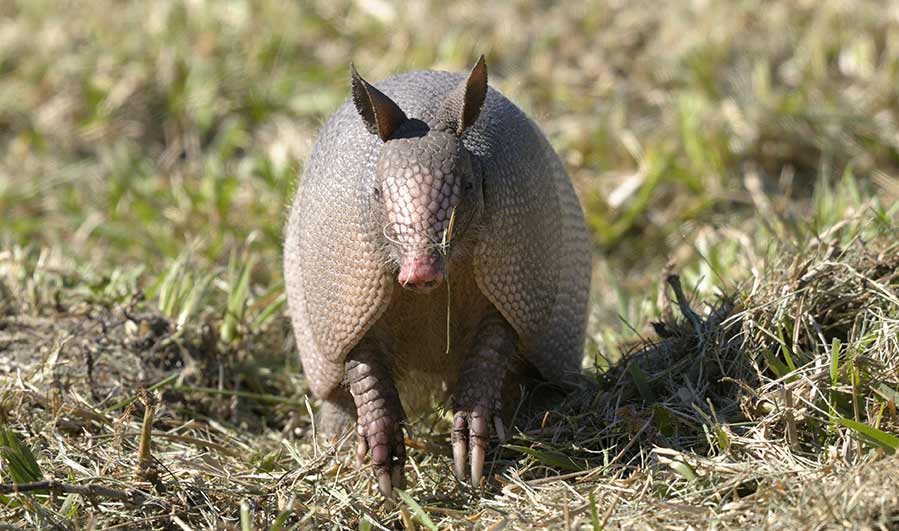 (Inside Science) -- Before the armadillos came, there were no large burrows on Georgia's Little St. Simons Island. But the armored creatures invaded the island around 1980, and now its forest and dunes are honeycombed with holes.

Zachary Butler, a graduate student at the University of Georgia in Athens, has found that armadillo burrows on the island are providing shelter and feeding grounds for a plethora of native wildlife. The findings suggest that in other parts of the Southeast, invasive armadillos might be helping to fill the ecological role left by a struggling native species, the gopher tortoise.

"It might not be a replacement or catchall, but it could definitely have benefits for the natives there that were relying on the gopher tortoise burrows," said Butler.

Texas used to be the northern boundary of the nine-banded-armadillo's range, but the animals have been spreading north for more than a century. This spread may be partly due to climate and land use changes, which have made the U.S. more hospitable to armadillos, and partly to humans physically moving armadillos into new habitats.

The population on Little St. Simons Island is thought to be largely descended from armadillos that escaped from a zoo in Florida in 1924 and then spread up the coast, said Butler. Little St. Simons Island is separated from the mainland only by a narrow strip of marsh, which wouldn't pose much difficulty to invading armadillos. To cross water bodies, armadillos can either inflate their lungs and float while dog paddling, or hold their breath and walk across the bottom, said Butler.

To find out how native species were reacting to the burrows on Little St. Simons Island, Butler monitored the entrances to 30 burrows using motion-activated cameras. He also visited an additional 40 burrows every two weeks for a year, looking inside with the help of a camera on the end of a hose.

Butler documented 15 vertebrate species using the burrows, including birds, snakes and rodents. He also recorded burrow use by ghost crabs, although he didn't count other invertebrates such as insects and spiders. Of the 580 instances of burrow use, 78 percent were by creatures other than armadillos. 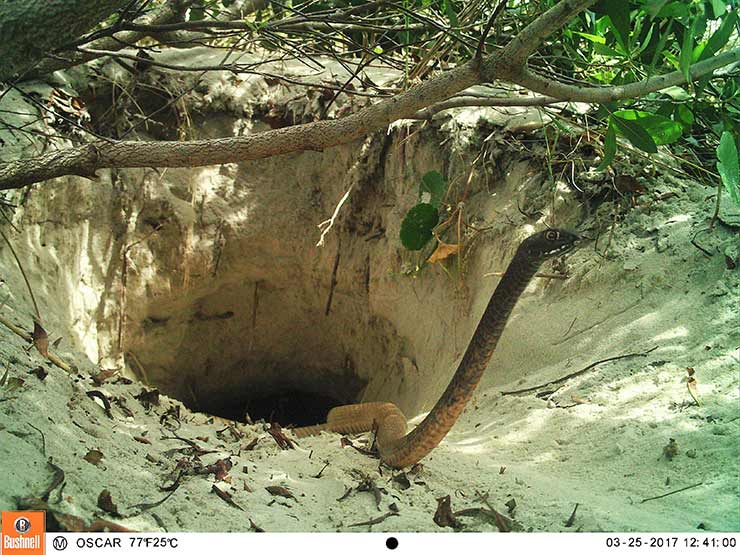 Different species used the burrows in different ways. For example, hispid cotton rats liked to forage for seeds in the loose dirt outside freshly dug burrows. Snakes often came a day or two later, perhaps drawn by the rats and the prospect of shelter out of the sun, said Butler. He presented the findings Aug. 8 at the Ecological Society of America meeting in New Orleans.

Butler's study is among the first to examine how other species use armadillo burrows. But the burrows of armadillos are similar in some ways to those of gopher tortoises, which have been studied extensively throughout the tortoises' range in the Southeast. Both types of burrows are about 6 to 12 inches across, although the tortoise burrows extend much further -- up to 40 feet, compared to 3 to 6 feet for armadillo burrows, said Butler.

Because of their burrows, gopher tortoises are hailed as "ecosystem engineers" that shape the landscape to the benefit of other creatures. More than 300 species have been found using gopher tortoise burrows, said Butler. But the tortoises face conservation threats, and they have been completely eliminated from some places where they used to live.

There are no historical records of gopher tortoises ever living on Little St. Simons Island, according to Butler. However, the gopher tortoise range overlaps with the expanding range of the armadillo. Thus, Butler speculates that where tortoises have vanished, armadillos might be able to pick up some of the slack. More research will be needed to find out whether such ecosystem engineer switches actually happen, as well as to investigate how armadillos and tortoises affect each other when both live in the same habitat.

It's too soon to conclude that armadillos are a net boon to the ecosystem, said Noelia Barrios-Garcia, an ecologist at the National Scientific and Technical Research Council and the National University of Comahue in Bariloche, Argentina. Armadillo burrows could potentially have myriad impacts that weren't addressed in the study, such as mixing soil layers, promoting erosion and disrupting nutrient cycling.

Nevertheless, Barrios-Garcia praised the study, and said it documented what appears to be "a really nice positive effect" of armadillos on other wildlife.

If it turns out armadillos are good for ecosystems, that could complicate their management, said Butler. Right now, armadillos are often viewed as pests because of the damage their burrows do to yards and gardens. But if armadillos boost biodiversity, then managers and property owners will have to weigh their priorities before evicting them.

"In urban environments, you'd like it to be as diverse as possible. And you'd think that these burrows would help," said Butler. But, he said, "going to the general public and being like, 'Oh, burrows will make sure there's rats and snakes in your yard' -- I don't think that would fly super well."