Scientists observe intense matchmaking behaviors from bonobo mothers on behalf of their sons. 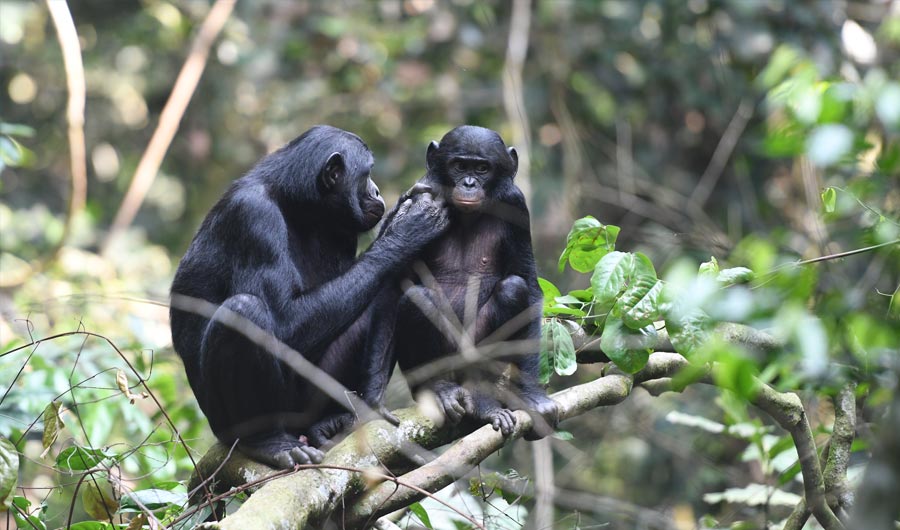 (Inside Science) -- When it comes to bonobos -- the great apes that are, with chimpanzees, humanity's closest living relatives -- mothers will literally drag their sons to females to get more grandchildren, a new study finds. As overbearing as such behavior might seem, researchers find it proves effective, boosting their sons' chance of fatherhood threefold.

The research started when scientists monitoring wild bonobos in the Democratic Republic of Congo saw females contending with males over females.

"In the beginning, we didn't know who these females were, and we thought it was odd -- we wondered what business it was of theirs," said study lead author Martin Surbeck, a primatologist at the Max Planck Institute for Evolutionary Anthropology in Leipzig, Germany.

In addition to dragging their sons to ovulating females, bonobo moms helped their sons become fathers by physically preventing their sons' rivals from mating and protecting their sons' romantic attempts from competing males. "It was surprising to see moms have such a strong effect on a very important component of male fitness -- their fertility," Surbeck said.

In contrast, the scientists found that wild chimpanzee males in Côte d'Ivoire, Tanzania and Uganda that lived with their mothers did not see a greater chance of fatherhood. They noted that among chimpanzees, males hold dominant positions over females, likely making the actions of chimp mothers less influential than those of bonobo moms, which are part of a social structure where females are the dominant sex.

In the future, the researchers want to explore what benefits these behaviors have for bonobo moms. "We think this is a way females can help their genes get passed on without having more offspring themselves," Surbeck said. "It's similar to what we see in human females, where long past the age they can bear children, they can have an impact on their grandchildren."

The scientists detailed their findings online May 20 in the journal Current Biology.

Protests, A Retracted Paper, and a Super-Earth Planet
Why Is an Empty Shampoo Bottle So Easy To Knock Over?
COVID-19 Vaccine, Monkeys and Bumblebees
Smart Speakers Could Detect Cardiac Arrest
Light And Art Come Together
END_OF_DOCUMENT_TOKEN_TO_BE_REPLACED