Bread Rises And Falls With Gluten 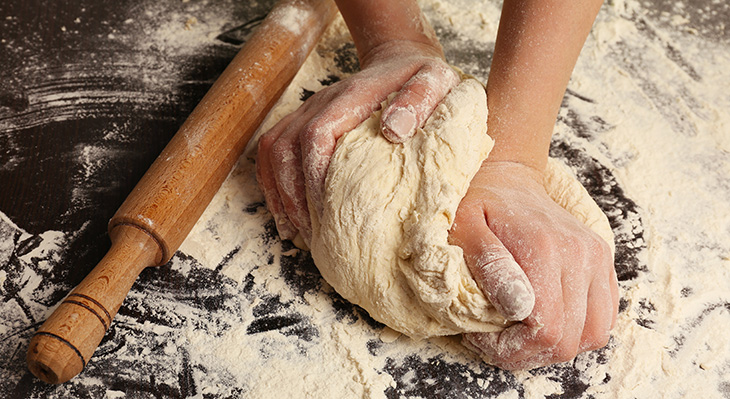 (Inside Science) -- Gluten may be much maligned nowadays. But it plays a central role in making high-quality loaves of traditional bread. When gluten fails, bread fails.

Despite its importance, the gluten protein has proven tricky to monitor during the breadmaking process. New research that strives to pave the way to more good bread has discovered one reason why: Starches make bad dough hard to detect.

Though novice bakers may not be able to distinguish a strong dough from a weak dough in the kitchen, food manufacturers care about the difference.

"This has important consequences in industry," said Mathieu Meerts, a Ph.D. student at KU Leuven in Belgium. Strong dough--which tends to have relatively high proportions of gluten--can be used to make good bread. Weak dough--which generally has lower gluten content--is mainly suited for non-leavened foods such as cakes and cookies. Companies that make bread are looking for inexpensive, quick, and accurate ways to measure dough quality, he said.

In the scientific literature on bread, "much has been written about the topic, but fundamental questions remain," said Meerts. This week, at the Society of Rheology meeting in Baltimore, Maryland, he presented new research that aims to provide some insight into how bread flows and deforms.

To make the simplest bread, one mixes flour, water, salt and yeast. Ordinary flour contains carbohydrates, protein and one component of fat: lipids. Starch makes up most of the carbohydrates, and gluten serves as the primary protein.

Mix these ingredients and they coalesce into dough. Water-soaked gluten expands to form a strong and flexible protein network that spans the entire dough. Starch granules occupy spaces in this gluten network. Yeast makes the dough rise by producing gas bubbles during baking.

Ideally, the infrastructure formed by the gluten is strong enough to prevent the bread from falling in the oven, but flexible enough to allow the gas bubbles to expand freely. The result should be a firm yet airy loaf of bread.

Food manufacturers have established that the fate of bread rises and falls on the quantity and quality of gluten. The amount of gluten is not enough to ensure good bread, but it also has to develop a strong, flexible gluten network during baking.

But how could manufacturers detect proper gluten behavior during a real-world baking process? Searching for mechanical clues, Meerts and his colleagues in Belgium and the Netherlands performed experiments on the flow and deformation of wheat dough. They tested mixtures of gluten and starch in water, stretching and turning them in a laboratory apparatus. The researcher also performed the same tests on starch-free dough based on pure wheat gluten.

When deformed to a high degree, the more-ordinary wheat dough behaved very similarly to pure-gluten dough. In real-world baking, such large deformations occur during the fermentation of yeast and the rise of bread in the oven.

However, the story is different when dough experiences small strains, or its change in shape due to forces.

"Starch does have an effect on gluten network strength," said Fadi Aramouni, professor of food science at Kansas State University in Manhattan. The effects of starch in grain have been widely studied, he said, so this research question is not new.

What is innovative, Aramouni said, is how the team measured the effects of large deformations versus small deformations on dough performance.

With this approach, Meerts said, the team can systematically test how dough is affected by other variables such as water content and mixing time. This in turn can provide industrially useful information and potential signals of good dough.

Using this approach, for example, Meerts and his colleagues also studied the effects of compounds that help gluten do its job. Manufacturers use the enzyme glucose oxidase to improve baked bread. The enzyme can cause gluten networks to form links that strengthen the dough. Too much enzyme, Meerts and his colleagues observed, could cause the gluten network to become a bit too strong, and result in overly dense bread. Adding just the right amount of the enzyme is key, he said.

Much is left to learn, Meerts said. For example, the researchers plan to apply their measurement techniques to understand how temperature affects dough properties. Understanding the science of breadmaking, Meerts said, requires researchers from many different areas of expertise, including food chemists, rheologists and yeast geneticists, to work closely together. Reliably distinguishing between strong dough and weak dough, Meerts suggested, is a complex problem that will keep scientists occupied for the foreseeable future.