How Dandelion Seeds Stay Afloat for So Long

New research suggests they create a newfound type of air vortex to slow their descent.
Image 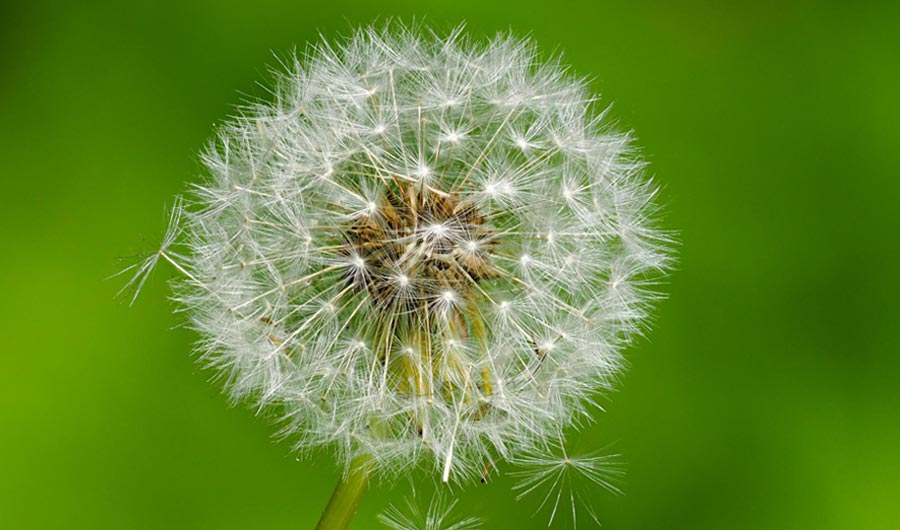 (Inside Science) -- A single breath from a playing child can send dozens of fluffy dandelion seeds floating into the air. Now scientists find these seeds can keep themselves aloft by generating a type of vortex previously thought too unstable to exist, helping explain how these flowers have dispersed across the planet.

Each dandelion seed is attached to a bundle of roughly 100 feathery bristles known as a pappus, whose name derives from an ancient Greek word for grandfather due to its resemblance to a beard. This structure prolongs the descent of seeds by dragging on the air a bit like a parachute, ensuring that horizontal winds can help carry the seeds farther. Most dandelion seeds probably land within 2 meters of their parent flowers, but in warm, dry, windy conditions, some may fly more than a kilometer.

Dandelions are far from the only plants to use wind to help disperse their seeds. It was a puzzle as to why dandelions evolved plumes to help keep their seeds in the air, rather than winglike membranes, such as what maple seeds have.

To explore this question further, scientists at the University of Edinburgh in Scotland built a vertical wind tunnel to investigate the physics of dandelion seed flight. They blew air under dandelion seeds that were either freely flying or fixed in place, adding smoke into this wind and illuminating it with a green laser to help reveal the way air moved around the seeds.

Using long-exposure photography and high-speed imaging, the researchers discovered that a kind of stable air bubble known as a vortex ring remained a fixed distance from the seeds. Experiments with silicon disks of varying porosity that imitated the aerodynamics of a dandelion pappus suggested the circular geometry and airy nature of the pappus is tuned precisely to stabilize these vortex rings, helping them deliver four times more drag than a solid disk with the same area. As such, this plumed structure may prove ideal for the dispersal of the small, light seeds of short plants, whereas winglike membranes likely prove better for larger seeds, the researchers write.

Prior work had found that objects could form vortex wings in their wake, but these either stayed anchored to these items or flew downstream. This newfound type of vortex ring was previously thought too unstable to actually occur, and suggests examining nature could reveal other as yet unknown kinds of fluid behavior.

The scientists detailed their findings Oct. 17 in the journal Nature.