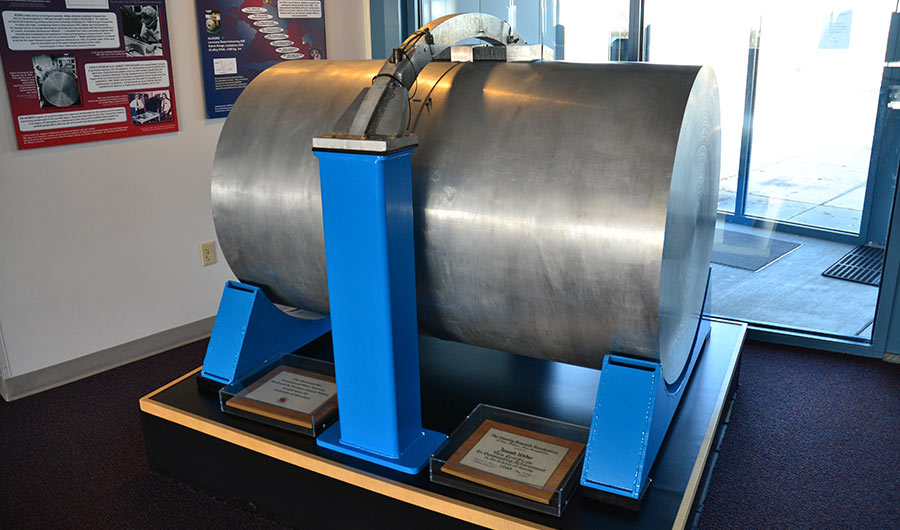 (Inside Science) -- Isaac Asimov once said that “the most exciting phrase to hear in science, the one that heralds new discoveries, is not ‘Eureka!’ but ‘That’s funny …’”

Joseph Weber, a well-respected physicist at the University of Maryland, may have overlooked that. He also found out that science can sometimes be a blood sport.

Other physicists were dubious, not about the idea that gravitational waves exist -- although there were still some skeptics back then -- but that Weber had managed to detect them. Among the doubters was Dick Garwin.

Garwin was the science prodigy who in 1952, at the age of 23, designed the first hydrogen bomb. Soon after that, Garwin began working for IBM, where he remained until his retirement in 1993. However, he also spent a considerable amount of time throughout his career as a government consultant, especially in the field of disarmament, trying to tame the sort of devices he once designed.

Weber had set up an experiment using two 6-ton aluminum bars with sensitive detectors attached, one at the University of Maryland, College Park and the other at the Argonne National Laboratory in Illinois. The bars were suspended in a vacuum by a steel cable. If the bars detected gravitational waves, they would resonate two octaves above middle C, something like a wind chime. After the experiment was set up and running in the 1960s, Weber claimed he saw two dozen in 81 days, and he published his results in the journal Physical Review Letters. The paper was never retracted and remains online today.

Nobel prizes were given for less.

Gravitational waves are ripples in space-time, like ripples in a pond. It would take a cataclysmic event -- even by astronomical standards -- to produce a gravitational wave with a signal as big as a relative shift of one-thousandth the diameter of a proton over a distance of a kilometer. To many, Weber’s experiment was too insensitive for the task.

Back at IBM, Garwin and an associate, James Levine, decided to see if they could do it better. “We scrounged up parts, aluminum bars from the stockroom, and built what came to be known as a Weber bar, but with provable sensitivity better than that of Joe Weber.” Garwin's conclusion was simple -- Weber could not have detected gravitational waves.

At the Massachusetts Institute of Technology, Rainer Weiss was also dubious about Weber’s work. He had also tried and failed to duplicate Weber’s experiment.

“He [Weber] had made a huge and powerful claim. And I began to realize maybe this was wrong, and maybe even his idea of how it works was wrong.” Other scientists, including Weiss, perhaps inspired by Weber’s attempt, began building new experiments, some using interferometers, devices that use beams of light -- in this case, lasers -- to make minute measurements.

Garwin and Levine published their findings in Physical Review Letters, the same journal that had previously published Weber’s experiment, essentially refuting Weber’s claim. Garwin said that if gravitational waves were so strong that Weber could see them with his equipment, the universe would have disappeared billions of years ago.

In the meantime, Weber had doubled down on his assertion, and he enlisted a collaborator, David Douglass of the University of Rochester in New York, who set up another bar. But when Douglass tried to duplicate the experiment himself, he found that Weber had made a mistake and could not have found gravitational waves. He told Weber.

At one time, Douglass said, Weber was going to make a retraction but never did. Garwin acted, he said, because of that inaction.

At a meeting in Cambridge, Massachusetts, in June 1974, Douglass and Weber sat in the front row when Garwin was about to make his oral presentation. Garwin said he didn’t want to embarrass the two men in public and that if one agreed to stand up and admit they were in error, he would sit down.

Neither did. Garwin gave the talk, and in the ensuing discussion he and Weber almost came to blows.  Physicists moved on to other ways of looking for gravitational waves.

Weber continued his research by raising his own funds.

Back at MIT, Weiss and his co-workers continued to experiment with detecting waves with interferometers, with larger and larger instruments. Eventually, California Institute of Technology physicists Kip Thorne and Ronald Drever got involved. Their device was called the Laser Interferometer Gravitational Wave Observatory, otherwise known as LIGO. Barry Barish, another Caltech physicist, became the director of LIGO in 1997.

On Sept. 14, 2015, LIGO scientists reported that LIGO had detected unmistakable gravitational waves. It was a momentous observation, proving a prediction of Einstein's  theory of general relativity. Three months later, the LIGO researchers detected a second wave. Drever died March 7, 2017 at age 85. On Tuesday, Weiss, Thorne and Barish were jointly awarded the 2017 Nobel Prize in physics for their research that led to the detection of gravitational waves.

Weber passed away in 2000, still maintaining he had detected gravitational waves. Douglass said last week after the Nobel for physics was awarded that if Weber were still alive, he would have shared in this year's prize. Thorne studied under Weber, and according to the Washington Post, credits him as "the founding father of this field."

Editor's note: Quotations from Garwin and Weiss in this story are from Joel Shurkin's research for his book True Genius: The Life and Work of Richard Garwin, the Most Influential Scientist You've Never Heard of. Douglass was interviewed for this story.

Protests, A Retracted Paper, and a Super-Earth Planet
Why Is an Empty Shampoo Bottle So Easy To Knock Over?
COVID-19 Vaccine, Monkeys and Bumblebees
Smart Speakers Could Detect Cardiac Arrest
Light And Art Come Together
END_OF_DOCUMENT_TOKEN_TO_BE_REPLACED