Cryo-electron microscopy helps scientists see the structure of biomolecules down to each individual atom.
Image 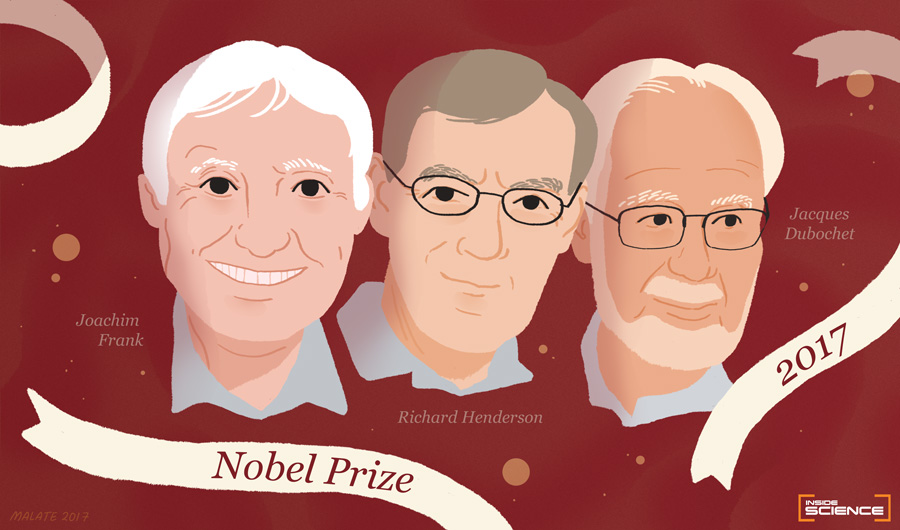 (Inside Science) -- The 2017 Nobel Prize in chemistry has been awarded to three scientists "for developing cryo-electron microscopy for the high-resolution structure determination of biomolecules in solution." The technique has brought about a revolution in biochemistry, the Nobel Prize Committee said in its announcement.

The prize goes jointly to Jacques Dubochet of the University of Lausanne in Switzerland, Joachim Frank of Columbia University in New York, and Richard Henderson, of the MRC Laboratory of Molecular Biology in Cambridge, in the U.K.

Cyro-EM, as the technique is called, makes it possible to see the structure of the molecules of life in solution -- similar to how they exist in living organisms. It is a powerful tool to help researchers understand how life works on the molecular level, and could lead to the development of new medical treatments and drugs.

The technique can also be used in the realm of nanotechnology. Christopher Serpell, a chemist at the University of Kent in the U.K., builds tiny, nanometer scale structures out of biological molecules, and uses cryo-EM to study what he makes. "It's easy to make something; it's hard to work out if you've made what you think you might have hoped," he said. "Cryo-EM is a really, really important tool for that."

Traditionally, biological molecules have been imaged using a technology called X-ray crystallography, which itself has been honored with numerous Nobel Prizes. But X-ray crystallography has significant limitations -- it requires that the molecules be coaxed into crystal form, a difficult, if not impossible, feat for many proteins, and certainly not the way they typically exist inside living creatures.

This year’s Nobel laureates each contributed significant advances toward a simpler and more versatile way to see the structure of biomolecules.

Richard Henderson started his career using X-ray crystallography, but became frustrated when a protein he was trying to study failed to crystallize. He turned to electron microscopy instead, even though many thought the technique was not suited to the task of imaging biological molecules.

An electron microscope employs a beam of electrons similar to how a traditional microscope uses light. But an intense beam destroys the sample and a weaker beam produces fuzzy images. The instrument also requires a vacuum, which evaporates the water around the molecules and causes them to collapse.

Yet Henderson persisted, finding ways throughout the 1970s and '80s to overcome each challenge. In 1990, he reached a big milestone, producing a 3-D, atomic resolution picture of the protein bacteriorhodopsin -- a purple-colored protein that helps certain microbes produce energy from the sun.

While Henderson was gradually improving the resolution of his images through experimental procedures, Joachim Frank was working on a computer algorithm that could take multiple low-resolution 2-D electron microscope images and generate a sharper 3-D image. It took him more than a decade to go from the theoretical idea to a fully realized new tool.

Henderson had been helped in his research by certain unique qualities of the bacteriorhodopsin protein that made it easier to image with an electron microscope. But Frank’s computer processing approach made the technique more generally applicable.

Meanwhile, Jacques Dubochet was working to solve the vacuum problem. The water around biomolecules quickly evaporates in the vacuum of an electron microscope, causing the molecules to collapse. Some researchers tried freezing the samples, since ice evaporates more slowly than water, but the ice crystals interfered with the image. Dubochet found a way to cool the ice so quickly that it vitrified -- forming instead a clear, glass-like structure.

The method freezes the molecules in a thin film "like a glass window," said Sara Snogerup Linse, chair of the Nobel Committee for Chemistry, who spoke during the announcement.

Taken together, these three researchers’ work transformed the task of visualizing biological molecules in solution, and the technique has since steadily improved. In 2013, a new type of electron detector helped bring the technology to a level Henderson long maintained was possible -- routine imaging of individual atoms in biomolecules.

Cryo-EM has now been used to image hundreds of biological structures, including ones that are responsible for operating the body’s biological clock, enabling photosynthesis in plants, and helping the Salmonella bacteria attack cells.

Peter Brzezinski, a member of the Nobel Committee and an expert in cyro-EM, said the future will not only be about visualizing the structure of biological molecules, but of freezing them mid-action and working out how they move and function. "For the future, we'll be able to see processes, what is happening, what is going on inside the cells, how do the molecules interact, how do they move, what do they do?" he said.

Editor's Note: For all of Inside Science's coverage of the 2017 Nobel Prizes, go to https://www.insidescience.org/nobel-coverage/2017.